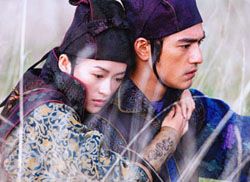 Zhang Yimou easily provides, at theatres this weekend, one of the most complete films to come to the screen in a very long time. Fresh off the success of his first foray into martial arts, Hero, Yimou’s sophomore effort in the genre, The House of Flying Daggers, takes the well-worn themes and reinvents them in a way that should make storytellers jealous and cinephiles drool. The House of Flying Daggers is not simply the kind of movie that you enjoy, it is the kind of movie that you revere.


Because so many mainstream movies focus on the theoretical demographics of their audience, many try to find their niche and then cater to it. It is for this reason that we have so many subcategories of movies ranging from romantic comedy to action adventure to thriller. The House of Flying Daggers, more than any movie this season, ignores the confines of such quasi-specific labeling and heads straight for the big picture-completeness. Undoubtedly this is an action movie, a martial arts movie, but along with the fight scenes and the fables the audience finds tragedy, finds love, finds beauty, and, if they’re paying attention, finds something to believe in.

If one were to force ideology on the movie, it could easily be understood as a symbolic capsulation of modern China’s struggle between communism and capitalism. Shockingly, this line of understanding is never addressed in Sony Picture Classics’ press kit, so that will remain best left to the active imaginations of the progressive populace. Instead, the House of Flying Daggers becomes, first and foremost, a twisted love story. At its core, the movie tells the complicated story of a love triangle between Mei (Ziyi Yhang) and her two suitors, Yin (Takeshi Kaneshiro) and Leo (Andy Lau). Because no love is simple, this story twists and turns behind deceptions, brilliant imagery, and the inevitable smoke and mirrors of any passionate enterprise. Ultimately, love resolves itself, though as in real life, the resolution is something less than pretty.

But if that unprettiness threatens to befoul an otherwise gorgeous movie, the delicate dance towards the finish certainly compensates. And it is quite a dance. In fact, much of the movies’ subtlety focuses on movement, not only physical movement but also emotional movement, and the shifting of seasons. The movie begins with a dramatic sequence that focuses the camera’s attention of Ms. Yhang’s entirely riveting dancing. From here, we are spectators, we are watching the dance, and we are never far from knowing exactly how lucky we are to be graced with such beauty. Despite the current media attention that has been showered on China’s surplus of screen beauty’s, I might argue that the most revelatory character in the movie is the man who shares the audiences adoring gaze, Mr. Kaneshiro, as he watches blind Mei dance.

Mr. Kaneshiro, a Taiwanese and Chinese actor better known for character acting, plays with the camera in a way that very few actors can comprehend. He is not the kind of star to swallow the camera whole, he does not hold the fascination that beauty like Ms Yhang does, but his appeal is magnetic nonetheless. In fact, he brings with him to this movie the rare ability to grace the audience with his presence in a way that is subtle enough that you might even fall in love. Even when he is off camera, one can feel his presence, much as Mei does when bathing. And we are not ashamed to feel him next to us; in fact, it is a comfort, and one that we look forward to.

This type of comfort might seem outside the realm of your normal martial arts movie, and that is very much the point. For anyone averse to the emotionless world of action movies, The House of Flying Daggers may threaten to turn your world upside down. A convincing argument could be made that this is one of the most heartfelt love stories of the year, as both the characters and actors seem to exude emotion and the story itself seems nearly Shakespearean in is scope.

While on the subject, I’d like to take a quick detour and briefly outline the multiple ways in which this movie could possible surprise. Beginning with the potential political allegories, The House of Flying Daggers is awash in complexities, it’s only a matter of investing in the thrill of them. Mei, for instance, may be one of the most subversive female leads of recent note. In the role, Ms. Yhang so often transgresses and subverts her sexuality that it is at times dizzying. It would be simple to call her submissive, and overly harsh to call her manipulative. She is a contradiction in terms and a contrast in colors-full of the lively greens of the world around her, and as seemingly endless as the whites she thrives in. Her femininity remains, throughout the movie, uncompromised, though it is also, and simultaneously, both articulate and indefinite. Andy Lau’s Leo also wanders the same realms of ambiguity. His proud government officer hides motives that only become more convoluted as the movie progresses, but his essential tone remains the quiet confidence of a moral beacon. It is not until the end, until we have almost fallen in love with our own sense of pity for his character, that he breaks our hearts. And this is to say nothing of the physical way that Zhao Xiaoding and Mr. Zimou use the camera to make color as much of an actor as any $20 million per movie star.

A movie with that level of complexity will, of course, also have its flaws. I don’t imagine that it would be impossible to find holes in the plot, or, even to point out minor inconsistencies in character and story. But to do so would be to cheapen the art of this film. Unlike so many other films, The House of Flying Daggers seems to understand love as the complex being that it is, and in doing so it allows for a realm of magic to enter into emotion. Concurrently, the art of the film, the finesse of the camera work, allows the audience to believe in the magic as well, and in doing so the love begins to feel nearly palatable.

In that regard, The House of Flying Daggers is dangerously Shakespearean. In the movie there are moments that seem so artistic it is easy to remove yourself from the immediate consequences of the story. There are images so beautiful that we are reminded, almost harshly in the stark colors of the film, that we are watching a fairy tale. But this is also the movie’s power. Somewhere in the melodrama, somewhere in the wash of whites, green, and golds, there is an honesty that is rarely achieved in a martial arts movie, let alone the sappiest holiday love story. That The House of Flying Daggers so neatly fits our perceptions of an action movie should not stop us from being surprised. That the best love story in years is told with the edge of a bloody sword and the sharp sting of a tragic doom should not keep us from believing in fairy tales. The House of the Flying Daggers is everything that we want movies to be, so long as we are willing to believe it.