Hotel Workers Take to the Streets; 92 Arrested in Sit-In 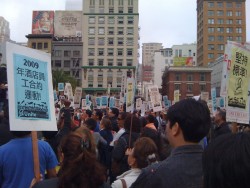 When the San Francisco hotel industry hits economic hard times, it means that management doesn’t make quite as much profit as the $200 billion they made over the past decade. But at the same time, they expect the workers who clean the bathrooms and make the beds to make “sacrifices” in their wages, pensions and health care benefits — which they could lose forever. “If I don’t have low-cost, high quality health care through my employer,” asked one worker, “who is going to pay for it? Will you?” Over 1,700 members of UNITE HERE Local 2 and community allies rallied in Union Square yesterday, as the union is locked in negotiations with some of the City’s largest hotel operators – including the Sterwood Corporation, Hyatt and the Blackstone Group. After a boisterous rally, the crowd marched to the Grand Hyatt and Westin St. Francis Hotels – where ninety-two were arrested for a nonviolent sit-in demanding a fair contract.