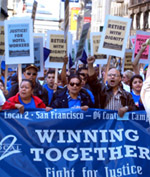 (Ed note: While details of the UNITEHERE Local 2 tentative settlement in San Francisco have not been released, yesterday’s hotel worker agreement in Chicago may provide insight on key terms of the deal)

From the Chicago Sun-Times, by Francine Knowles:

Unionized workers at Hilton Hotels Corp. in Chicago have ratified a new three-year contract that boosts the wages of room attendants nearly 21 percent, reduces work loads and makes it easier to organize workers, Unite Here said Thursday. The agreement calls for an immediate wage increase of $1.10 an hour for room attendants, who previously made $12.10 an hour. The union also won reductions in daily room quotas for room attendants on heavy check-out days. The pact affects 2,300 workers. Under the agreement, the company will remain neutral in organizing campaigns. A simple card check by a majority of workers will be all that’s needed to successfully organize Hilton workers.