Hotel Workers, Guests Only “Pawn in Their Game” 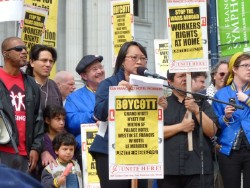 The war between the giant hotel corporations and hotel workers is heating up again. The recent three-day strike at the San Francisco Hilton by UNITE HERE Local 2 workers was just one battle in this fight. But the story in the corporate media is not about economic justice for low-income and hard-working room cleaners, housemen, bellmen, cooks, servers and dishwashers. Instead, the corporate media focuses on hotel room rates and occupancy levels, beating the drum for the allegedly suffering hotel companies.

The corporate media, as usual, ignores the real story: the hotel industry today is much more about bankers, hedge funds, real estate speculators and financial profiteering than it is about selling rooms. The buying and selling of hotels, often huge properties in prime downtown locations, creates immense profits for the business barons who finance the industry — and continues to do so even in the midst of the current financial crisis.

In this sense, hotel workers and hotel guests alike are mere pawns in a much larger game. Behind brand-name hotels like the Hilton stand the bankers and speculators, including the infamous Goldman Sachs, whose connection to the hotel industry will likely surprise many. Other players – such as the Blackstone Group, Millennium Partners or HEI – are not household names, but are nevertheless the real powers behind the throne.

Take, for example, Stephen Schwarzman, Chairman and Chief Operating Officer of the Blackstone Group, the hedge fund that owns Hilton Hotels. Schwarzman was paid a staggering $1.3 billion in 2008, even as the economy was crumbling all around us.

Blackstone’s website describes the company as a leader in “Asset Management businesses – including private equity, real estate, credit vehicles and funds of hedge funds … along with a full spectrum of transaction execution capability in areas such as acquisitions, mergers, joint ventures, divestitures, takeover defenses and restructuring/reorganization activities.”

In plain language, Blackstone makes money by moving money from here to there and back again. Not a word about selling hotel rooms. Blackstone’s Schwarzman made his billion-plus in 2008 by exercising “stock options” the company had granted him.

This is a far cry from the way hotel workers make money — by making beds, cleaning toilets, cooking food and carrying luggage.

Blackstone is awash in money. They bought the Hilton Hotel chain in 2006 for $26 billion. They manage about $100 billion in assets, including the Hilton, and recently reported having about $28 billion in available cash.

An infinitesimal fraction of Schwarzman’s bloated compensation, much less Blackstone or Hilton’s profits, could easily seal a deal between San Francisco workers and the Hilton. But the immense profits and greed of the corporate elite creates a tide of arrogance that washes away their common sense.

In 2006, Goldman Sachs sold their 50% stake in the San Francisco Four Seasons Hotel to their co-owner, Millennium Partners. The price was about $127 million. This was $460,000 per hotel room — the second highest price ever paid for a San Francisco hotel property.

Goldman Sachs, the biggest and most profitable investment bank in Wall Street history, whose financial shenanigans are now the stuff of legend, walked off with the brass ring in the Four Seasons sale. But not long afterwards came the Great Recession and the collapse of the credit market, brought on in large part by the very same Goldman Sachs and their corporate counterparts, whose reckless speculation in toxic home mortgages nearly brought down capitalism as we know it.

Millennium Partners, saddled with huge debt when the hotel market hit the skids, found their Four Seasons property deep underwater, just like millions of homeowners around the country. So, last year Millennium “strategically withheld payment of debt service” – that is, they stopped paying the mortgage.

If a hotel worker had scrimped and saved and been lucky enough to buy a home, then stopped paying her mortgage, she and her family would no doubt be headed for the streets and financial ruin.

But that is not how it works in the corporate world.

Millennium announced last March that they are no longer in default on the Four Seasons property, having teamed up with Westbrook Partners, a New York investment company. Westbrook has now taken control with a $35 million investment. Westbrook is clearly happy to buy a San Francisco luxury hotel on the cheap, and looks to make big bucks in the future.

Millennium Partners is happy too, despite having lost control of the Four Seasons. When they stopped paying the mortgage they were merely making a “strategic move.” Millenium still brags of having an “impeccable reputation” with an “unparalleled portfolio” of luxury hotels, high-rise condos like Millennium Towers in San Francisco, entertainment complexes, and class-A office buildings, “a collection of assets beyond compare.”

Like the big banks and investment companies, Millennium Partners is just “too big to fail.”

For Millennium and their partners in the corporate world, defaulting on their financial obligations is perfectly acceptable behavior. For the rest of us, of course, it would mean a trip to the financial woodshed.

But the room cleaners, cooks and bellmen at the San Francisco Four Seasons Hotel have to be content with struggling to live paycheck-to-paycheck, facing an uncertain future.

Over a year ago, a brave and determined group of workers at the HEI Le Meridien hotel in the San Francisco financial district launched an organizing campaign, seeking a fair process that will allow employees to freely and democratically decide, without interference from management, if they want to form a union.

Stonewalled by management for months in their quest for some semblance of justice, the workers and the union called for a boycott of the hotel. Workers at the two other HEI-owned hotels have made similar demands.

HEI Hotels and Resorts is not just a hotel management company. They describe themselves on their website as a company “building a legacy in hospitality real estate … Our private discretionary funds grant us ready capital for acquisition, development and property improvement. We acquire full service, upper upscale, luxury properties … Property value is our goal.”

HEI operates much like the guy who buys a fixer-upper house, renovates it, sells it, and moves on to the next project. Except HEI aims to “acquire and/or develop approximately $500 million annually.” They target “top markets and properties franchised under such major brands as Le Meridien, Marriott, Westin, Hilton, Renaissance, Embassy Suites, Sheraton and Crowne Plaza.” They hold these properties for a few years, then sell them at a big profit, and move on.

In this game, room rates and occupancy go up and down, but room sales are just a method of paying the mortgage until the property can be sold.

HEI’s website says that the employees who service their hotel properties are “like a beehive where specialized skills, dedication to task and individual performance add up to collective success.” “Collective success” here simply means profits for the HEI money men. The worker “beehive” is just one part of the financial formula, worth no more consideration than the beds in the rooms or the pots and pans in the kitchens.

HEI, not surprisingly, has fiercely resisted all efforts by their workers to win an agreement permitting them to choose whether or not to form a union. Some union supporters have even been laid off or fired.

Ironically, the biggest HEI investors are not your typical bankers and corporate moguls, but “prestigious university endowments,” funds which include Harvard, Princeton, Yale and Dartmouth, as well as Notre Dame, Vanderbilt, and the Universities of Pennsylvania, Michigan and Chicago. These Ivory Tower academics have blithely adopted a “see no evil” investment policy, which in turn allows HEI to pass itself off as the champion of education and of the hallowed halls of the Ivy League.

HEI, “prestigious university endowments” in hand, bought the San Francisco Le Meridien in 2006 for $129 million. The purchase was financed based on estimates that the property would be worth $155 million in 2010. Instead, today it is worth much less – perhaps as little as $80 million.

But in the rarified world of hotel real estate, nothing is real. As long as HEI’s Ivy League investors keep ponying up money, the corporate shell game continues without missing a beat. Their “business model fully aligns our financial and hospitality expertise in a cohesive, streamlined network for clear advantages and collective success.”

There is that “collective success” rhetoric again, code words for corporate profits. Move the money here, then move the money there, and the beat goes on.

But as of yet there is no “collective success” for HEI hotel workers in the “beehive,” still denied fair play and union representation by the HEI financial moguls.

THE NEXT TAKE: HOTEL WORKERS RISING

What is a poor hotel worker to do? We fight back.

In the midst of the worse financial crisis since the Great Depression, the bankers, real estate speculators and financial tycoons continue to make money hand over fist. They, of course, have no intention of sharing any of that largesse with you or me. Instead, they try to squeeze every last drop of profits out of our hard work.

As usual, the corporate media covers for the corporate bigwigs, babbling on and on about low room rates and occupancy levels. They have nothing to say about the immense profits of Goldman Sachs, Blackstone, Millennium Partners or HEI, hiding behind brand names like Hilton, Four Seasons and Le Meridien.

While we and our families worry about the next bill, and our friends and relatives lose their jobs and their homes right and left, the corporate shell game goes on and on.

So we fight back. We have no other choice.

San Francisco, get ready to rock and roll this summer.