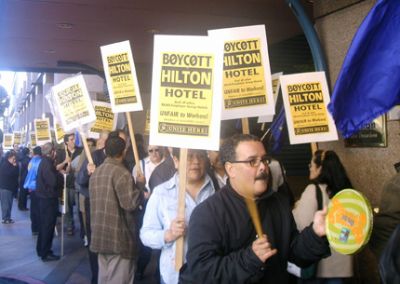 Hotel Workers’ Union Local 2 held a raucous protest in front of the downtown Hilton yesterday, urging San Franciscans to boycott the hotel along with fourteen others. Local 2 hopes the boycott, which some claim has already cost the targeted hotels over $1 million, will force owners to meet workers’ demands during the current contract negotiations. The union is calling for better health care, higher wage increases, and more freedom to organize.

The protest began in the early afternoon, with between 50 to 100 workers and sympathizers chanting and marching until dusk. Local 2 members stated they hoped the event would make the boycott more visible to everyday San Franciscans and organizations considering holding events at the targeted hotels.

“We’re working to advance the boycott, letting the owners know that we’re going to continue to drive business out of these hotels,” said Mike Casey, president of Local 2. We’ve cost them a million, and we’ll cost them several million more if that’s what it takes to get them to come to their senses.”

Union members organized a strike last November, which owners responded to by locking out workers for nearly a month. A 60-day cooling off period followed that doesn’t seem to have cooled anyone down, as the recently resumed bargaining process remains contentious as ever.

Local 2 faces the loss of health care coverage for several hundred of their members, wage increases that barely keep up with inflation, and a reduced ability to organize in the workplace. In addition, the union also has the opportunity to change the length of their contract in order to coordinate negotiations with other hotel unions throughout the country. This would dramatically increase their bargaining power.

Rank-and-file union members seemed excited about the protest, shouting slogans and banging sticks together in time with their chants.

“The multi-employer groups that we’re boycotting have made promises they haven’t kept,” said Robert Lehr, a bartender and Local 2 member. “They said they’d bargain in good faith, and they haven’t. So that’s why we’re here, and we’ll be here as long as we need to be.”

The boycott protest comes on the heels of a major victory for the union, as a convention that would have brought over 2,000 historians to San Francisco recently relocated due to concerns with crossing a picket line.

No one seems to know when the current deadlock will end, but for Local 2, it would seem the later the better. If hotel workers can hold out for another year before agreeing to any conditions, then the new contract they sign will begin at the same time as hundreds of other hotels in several major U.S. cities. Thus, their most contentious demand – synchronizing their contract with other unions’ – would be achieved by default.