Hooray for the American Dream 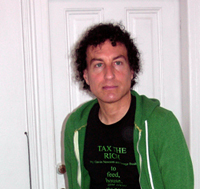 Homeownership has always been a big part of the American Dream, there’s no question about that. We heard that loud and clear at the recent Board of Supervisors hearing on legislation that would limit the ability of real-estate speculators to kick out working-class tenants so that they can make gobs of money selling their units to upper middle-class American Dream wannabes. The kind of realtors who glaze over when you tell them that the unit they’re selling was once rented by a person with AIDS who subsequently died after his eviction. Good thing they don’t let anything silly like a conscience get in the way of their god-given right to make an obscene profit from people’s basic need for a roof over their heads. This ain’t Cuba, for chrissakes. Thanks to the free market here anyone who isn’t too lazy to be working 114 hours a week can easily afford the average market-rate studio.

The American Dream started with Christopher Columbus. One might say he was the country’s first real-estate speculator. He saw that the downwardly-mobile lifestyles of the Native Americans just wasn’t going to cut it with his European compadres so he did what any good conquistador or realtor would do: He stole the land. The land grab continued with the Pilgrims, who may have invited the Native peoples to Thanksgiving dinner but they didn’t want them living next door. Talk about property values going down into the gutter! And one of them might actually want to marry into the family. There goes the DAR pedigree.

A couple centuries later, the pioneers in their humble stage coaches carried their manifest destiny and their dream of unlimited homeownership opportunities westward as they slaughtered everything in their path (including the buffalo).
Think of what they faced: The Native peoples didn’t even have a word for “mortgage” or “real estate.” They believed that humans didn’t own the land. They treated it as something sacred. Fortunately, the settlers were christians and could teach them the true way: Dominion over the land and the animals, as prescribed by the “good book.”

The more modern concept of homeownership comes from the 50s, that glorious decade which gave us padlocked closets for queers and chastity belts for women. Not to mention segregation, and anti miscegenation laws. Hey, everybody else was happy. White, middle-class folks fled to sanitized prefabricated suburbs to get away from blacks, queers, hookers and others they didn’t want their kids to see. TV peddled the American Dream with Ozzie and Harriet, Donna Reed and all those other family sit-coms that made us ethnic types realize how real Americans lived. “Mommy, I wanna have a house just like that when I grow up!”

Everything was just as it should be. Until those horrible hippies came along to corrupt our youth with their drugs, free sex and communal lifestyles. Summer of Love indeed. It was just an excuse to trash our American values. Then there were those long-haired rock stars with their hidden messages (play the CDs backwards and hear it for yourself) telling our youth about socialized housing and private property being something bad (“theft,” some French guy called it). The Republicans were right: We should’ve shipped them all off to Russia.

Now, thankfully, times have changed. The hippies have grown up and have stock portfolios. “White flight” is a thing of the past. Folks want to live in our cities again.
The least we can do is provide them with homes in the nicest neighborhoods. Redevelopment is on top of it in the Bay View. Think of all the lovely picket-fence homes that can be built there–with the best views and warmest weather in town. In other parts of San Francisco, realtors are busy removing pesky long-term tenants from those beautiful old apartments that make darling condos.

It’s good to see that people are once again standing up for the true values of this country: wage slavery at corporate jobs, traditional marriage (gay or straight, take your pick), gas-guzzling SUVs, and homeownership at any cost. Hooray for the American Dream!