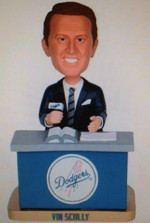 Tonight is Vin Scully bobblehead night in Los Angeles, a fitting honor for baseball’s all-time greatest announcer. I first listened to Scully nearly fifty years ago, growing up in Los Angeles as a Giants fan who hated the Dodgers but loved their announcer. Scully has broadcast Dodger games since 1950, and at age 84 still brings a level of drama to games that few can rival. After covering Jackie Robinson and the fabled first championship of the Brooklyn Dodgers n 1955, Scully followed the team to Los Angeles after the 1957 season. He transitioned from a world in which baseball radio announcers were the sole source of game information for those not in the stadium, to a time when scores and play by play are followed on phones and computers. Scully has truly lived a remarkable life, and is a living legend of our time.

I often say that the reason that I know Vin Scully is the greatest all-time announcer and Sandy Koufax the greatest pitcher is that I grew up passionately rooting against the Dodgers yet still admired their announcer and greatest star. In those days, World Series games featured broadcasters from the teams involved, allowing fans across the nation to hear how much better Vin Scully was than anyone else.

Scully began in an era where television was just emerging and the vast majority of baseball fans relied on the radio. This required broadcasters to not simply announce balls, strikes, hits and foul balls, but to create a powerful visible image that enabled fans to feel like they were watching the game.

Scully described the breeze, level of sun, and the mottled light facing the batter. He captured the anxiety of the crowd, facial tics of the pitcher, and the rootedness of the batter – all in between pitches. He was the baseball Picasso of his time, an artist who gave listeners as vivid a picture of the game as those in attendance. Scully had a sing-song rhythm to his voice that cannot be replicated in this era requiring homogenous sounding announcers.

Scully did not want to leave New York City after the 1957 season, but Los Angeles had three special features that highlighted his talents.

First, the city’s nightmarish commutes and traffic jams meant that millions were trapped in cars with only their radios for entertainment. Scully arrived when AM radio was king and people listened to Dodger games at the beach, while grocery shopping, and wherever they went.

Second, because Dodgers owner Walter O’Malley was notorious a cheapskate, throughout the 1960’s he refused to televise away games other than against the Giants. Since fans could only watch nine Dodger games a year outside the World Series, most fans followed the team through Scully’s broadcasts.

Scully also benefitted from being the lead broadcaster for the Los Angeles Dodgers when they won the World Series in 1959, 1963 and 1965. This was the golden age of LA Dodgers baseball, with stars like Maury Wills, Don Drysdale and the great Koufax needing someone of Scully’s skills to chronicle (and mythologize) their efforts.

For example, while the most famous call in the history of baseball is Russ Hodges’ repeating, “The Giants Win the Pennant” after Bobby Thompson’s 1951 playoff homerun, the most famous regular season call has to be Scully’s broadcast of the 9th inning of Sandy Koufax’s September 9, 1965 perfect game.

Nobody has ever set the stage better for an historic achievement than Scully did in that 9th inning. This is the call where he described the mound at Dodger Stadium as “the loneliest place in the world.” And when Scully intoned “2-2 pitch to Harvey Kueen,” fans were breathless well before Koufax’s final strike to cement the perfect game crossed the plate.

You can hear Scully’s legendary call of that 9th inning here. I have heard the recording many times, but playing it on you tube yesterday still sends shivers down my spine.

I listened to that game as it occurred. I was rooting for Koufax’s opponent, Bob Hendley, who threw an 8 inning one-hitter. I admired Koufax during his career but rooted for him to lose every game he pitched.

Watching Matt Cain’s recent perfect game was a very different experience from listening to Scully’s broadcast of Koufax. The Giants announcers did a great job, but because we could see the action ourselves we were not hanging on their every word as we did with Scully.

Scully in the Modern Era

Scully’s descriptive powers were less needed on television. While he served for years as the lead national television broadcaster on the World Series, this format did not show him at his best.

The Dodgers are no longer the center of the Los Angeles sports universe, and have not been so since Magic Johnson brought Showtime to the city in the 1980’s. It doesn’t matter how much Magic’s partners in the new Dodger ownership group spend for players, the Dodgers will never be the dominant sports force in Los Angeles that they were in the 1960’s.

But because traffic jams are longer than ever in Los Angeles, Scully’s radio broadcasts continue to find a large audience. And despite every game being available on television, many fans still prefer turning off the sound and listening to Scully’s radio account.

Unlike longtime Lakers broadcaster Chick Hearn with whom he is often compared, Scully was not a homer. I could not have listened to him if he had been. He absolutely loved Willie Mays and Willie McCovey, even when their homeruns beat the Dodgers. He made fans appreciate all players, and seemed to even find special favor in “Dodger killers” like Hank Aaron (who Scully usually referred to by his given name, “Henry”).

Vin Scully is a jewel of a man who has brought millions great pleasure. He recently announced plans to broadcast his 64th season next year. When asked how long he would continue, Scully made no specific commitments, but noted in typical fashion that his mother lived to 97.