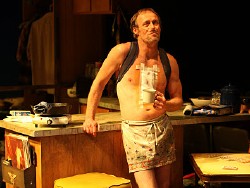 ANNAPURNA: A WORLD PREMIERE THAT IS CRAZILY INVENTIVE – MAGNETIC

It’s not very often that you come across a script that is this explosive. Right from the very beginning, as you look at the messy shabby Trailer Home you feel trapped by some magnetic force.

Rod Gnapp pounces on us right from the beginning. He’s touch irresistible and cantankerous. But there he is pretty much nude in front of us, except for a small little Apron to cover the Jewels. When he turns his back on us, we get more revealing peeks.

His ex wife suddenly after many years, is knocking at the door. She is appalled by the conditions that he is living in. There is a love-hate magnetism going on here. It’s a dance act of falling out of love, but yet — there is still something there. They can’t let go.

Rod Gnapp tells it all, with his eyes, his body language and his inward glances. There are moments when you get the feel of Cat On a Hot Tin Roof, the two lovers who can’t let go, manage to irritate and uncover depths of emotion that they probably should not uncover, at least not to each other. They thought that they could never put their lives back together and maybe they won’t. Seldom has a script resonate so many good and bad feelings.

Knapp is a rough and tumble guy. Gutsy, funny and charming at times but watch out, because he can turn into a sly and slick manipulator who is warm and charming one moment and the next — he is cold blooded and uses the F-word more than once.

Emma (Denise Cormier) is not exactly an Angel. She shouts out:
Emma:– “You know what you are? Do You?”
Ulysses (Rod Gnapp): “Yeah! I’m a F-n Zen Master!:
Emma: – “You’re defiantly impoverished! It’s like anything you get. That makes anything better — You’ve got to Sh-t all over it!”

Annapurna is the most electrifying play of the year — and the Actors, Denise Cormier and Rod Gnapp who play Emma and Ulysses made Sharr White’s words, light up like firecrackers. I felt the heat.

Rod Knapp is one of the best Actors in his generation. He’s one of the most important Actors around. You MUST see this remarkable play at the Magic Theater.

AT THE MAGIC THEATRE AT FORT MASON

Singer Carly Ozard. Just one of her many looks. The Hair color changes often. But the singing stays sturdy. Photo: Courtesy Photo.

CARLY OZARD TOPS THE CHARTS WITH A NEW SHOW

CHARM, WIT, CARLY’S GOT IT ALL IN A NEW SHOW. Maybe it’s just her voice and then again, maybe it’s orchestrations. Whatever it is, this was one of the most gorgeous, enjoyable and heartbreaking evenings that I’ve been to in a long, long time.

Yeah, Carly knows how to bring beautiful and touching music to her shows that show actual details and emotions. There is even sort of a plot about romance and how it sometimes fails.

As usual, Carly has assembled a fantastic Band led by the talented, always smiling Kelly Park. At this show he played the piano. The man has fingers spun from Gold. And of course the rest of the boys in the Band turned in exciting performances.

Ozard reaches out for music that are undeniably heart wrenching. Oh, sure she sings some light and fun songs also but it is the tearjerker songs that really get to you.

Every singer seeks a repertoire that will help him or her stand out from the crowd and at the Rrazz room, she brought down the house.

Here are a few songs that Ozard brought to the mike. There was her outstanding version of Carousel. If that don’t make your socks roll up and down, then nothing will. She said to her audience “the moral of the song is don’t piss a crazy person off!” Miss Liberty there was the upbeat and fun Falling Out of Love Can Be Fun (Irving Berlin).

Just before Carly started to sing the song Nine the musical, a cell phone went off. Carly shouted out “Hey, turn your phone off. Who do you think you are.” He was embarrassed of course, but we all handled it well.

Loved the touching and hopeful Long as I Can See The Light (music & lyrics by John Fogerty) from Credence Clearwater Revival.

Those songs about are just tidbits of all the joys that you will hear at Carly’s new show. With her “it’s a perfect marriage of music and lyrics. Who needs boyfriends?” She’s over that.

Ozard stands out in the crowd of singers. She is not only a great singer, but has magnetic appeal as she tells between in between the songs little tidbits about her travails in life.

The Set that she has put together is definitely something that will probably end up in New York.

Be sure to catch her when she comes back to http://www.theRrazzRoom.com/