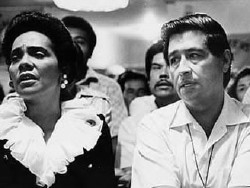 In 1972, UFW leader Cesar Chavez went on a fast in Arizona in response to that state’s enactment of an anti-farmworker law. The fast was part of a larger grassroots campaign to recall the Governor who signed the legislation, and included a massive voter registration drive that helped elect Raul Casto as the state’s first Mexican-American governor in 1974. Chavez’s 1972 fast gave birth to the legendary UFW rallying cry, Si Se Puede, a call that was taken up by Barack Obama’s 2008 presidential campaign and which has become a hallmark of social justice struggles. Rick Tejada-Flores was a young filmmaker working for the UFW at the time, and with his partner, Gayanne Fietinghoff, documented the fast in the film, Si Se Puede. This extraordinary piece of history is now available for viewing.

Having researched and interviewed many of those involved in Cesar Chavez and Dolores Huerta’s launching of the rallying cry Si Se Puede!, I was eager to see Rick-Tejada-Flores’ legendary film. I write about the Arizona campaign and the story behind “Si Se Puede” in my book, Beyond the Fields, and the film takes viewers back to the days when creative young activists used the low-tech resources at their disposal to document the “peoples” history.

The film has not been available to the public for over 30 years. Now, Tejada-Flores has arranged to sell copies for $29.95, with all profits going to the Cesar Chavez Foundation to support its important work.

Check out Tejada-Flores’ website to learn about, and get a copy, of this remarkable film. This is a rare piece of history, which captures Arizona and UFW activists battling over some of the same issues that state is dealing with today.

Randy Shaw is the author of Beyond the Fields: Cesar Chavez, the UFW and the Struggle for Justice in the 21st Century. Follow Randy on Twitter: @RandyTHClinic.