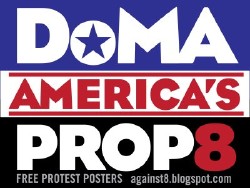 Part 3 of the Defense of Marriage Act (DOMA) was found unconstitutional yesterday, by a 79-year-old Federal District Court Judge in Boston. Joseph Tauro, the longest serving Nixon appointee on the bench, ruled in a pair of cases that gay couples who were married in Massachusetts are denied equal protection. Part 3 of DOMA denies gay couples (even if a state recognizes their marriage) any of the 1,000-plus federal marriage rights – such as Social Security benefits, immigration or joint tax returns. Tauro noted how DOMA radically intruded in an area (marriage) that has long been the province of the states. As California awaits a federal court ruling that challenges Prop 8, Tauro’s decision paves the way for marriage equality – by proving that a court doesn’t need to rule under “strict scrutiny” to find DOMA unconstitutional. This is a departure from earlier California cases on marriage equality, and should guide the federal case to repeal Prop 8.

The two cases challenging DOMA – one by GLAD (Gay & Lesbian Advocates & Defenders) on behalf of gay couples, the other by Massachusetts Attorney General Martha Coakley – were both smart lawsuits, targeted at making incremental progress for marriage equality. Massachusetts has had gay marriage since 2004, but couples there still don’t have full equality – because DOMA prevents them from accessing any of the federal rights that come with marriage.

In fact, I had argued back in January that this suit was preferable to the federal case against Prop 8, because the odds of success were better. Because so much of the tangible benefits that come with marriage are federal, going to federal court was always inevitable – but civil rights lawyers had avoided it for years, for fear of the U.S. Supreme Court’s conservative bent. I even worried that a bad Prop 8 ruling could sabotage our challenge to DOMA.

But after reading Judge Tauro’s decision in the GLAD case, the federal court has improved the likelihood of repealing Prop 8. Rather than declare gays to be a “suspect class” and reject DOMA on “strict scrutiny” grounds, the ruling said that was unnecessary – because DOMA doesn’t even pass the more lenient “rational basis” test. The federal courts have never found gays to be a “suspect class,” but now we have a map for overruling Prop 8 on similar grounds.

When a law discriminates against a group of people, the first question a court generally asks is if that group is a “suspect class.” If so, the law must pass “strict scrutiny” – which means it’s presumed to be unconstitutional, unless the government defines a compelling public interest and the law is narrowly tailored through the least restrictive means. If not, the law is fine – as long as the court can literally dream up a “rational basis” that the law is legitimately related to. If there is no rational basis, it is “irrational” – and thus illegal.

What was so special about prior cases in California, Connecticut and Iowa is that those state Supreme Courts found sexual orientation to be a “suspect class” – and thus found on “strict scrutiny” grounds that gays must have the right to marry. But here, Judge Tauro writes: “DOMA fails to pass constitutional muster, even under the highly deferential rational basis test … There exists no fairly conceivable set of facts that could ground a rational relationship between DOMA and a legitimate government objective.”

Why is this so important? Because having live-blogged the Prop 8 trial, I’ve become very concerned about how we could get the federal courts to strike it down – if no federal court has ever found gays to be a “suspect class.” Without such a finding (and it’s naïve to count on any federal court to do so), anti-gay laws like DOMA and Prop 8 are presumed constitutional – unless we can prove they have no rational basis, and are motivated solely by animus.

How did Judge Tauro find no rational basis for DOMA? First, he went through the four reasons Congress gave for passing it in 1996 – which even the Obama Administration won’t argue anymore: (a) the purpose of marriage is to procreate, (b) government must defend and promote straight marriage, (c) Congress morally disapproves of gays and (d) DOMA preserves scarce government resources. Needless to say, he disposed of all four – by explaining how denying benefits to gay married couples did not achieve these goals.

Then, he looked at the “reasons” that the Justice Department currently gives for keeping DOMA on the books – (a) preserving the status quo, and (b) administrative efficiency.

On preserving the status quo, Tauro wrote: “the government assumes that Congress has some interest in a uniform definition of marriage for purposes of determining federal rights, benefits and privileges.” But the definition of who gets married has always been up to the states, and not all states have the same standards. All the federal government needs to know is that a couple legally wed under the laws of their state.

“Importantly,” he wrote, “the passage of DOMA marks the first time that the federal government has ever attempted to legislatively mandate a uniform federal definition of marriage.” Arguably, it’s the second time – Congress made polygamy a crime in 1865.

As for administrative efficiency, Tauro explained that it’s just a subterfuge for the old argument that DOMA was to preserve scarce resources: “it strains credulity to suggest that Congress might have passed DOMA – touching every single federal provision that includes the word marriage or spouse – simply for the discrete goal of consistency in the distribution of federal marriage-based pecuniary benefits.” Besides, now that states like Massachusetts allow gays to be married, DOMA adds an unnecessary layer of confusion.

In the absence of a rational basis, it is fair to conclude that the only reasons are irrational – and so the Federal Court Judge overruled Part 3 of DOMA. Gay marriage advocates hope that we’ll see a similar verdict in Prop 8 – where the opposing side presented very weak evidence at trial on any rational to deny gay couples the right, besides bigotry.

Will Judge Tauro’s decision be appealed? Everyone expects it to, just as we presume Judge Vaughn Walker’s ruling on Prop 8 – which we anticipate any day now – to be as well. The right-wingers at NOM even went so far as to pray “with God’s help” there will be five U.S. Supreme Court justices to uphold Prop 8, and their press release over the DOMA ruling yesterday was equally hysterical. Expect this to be unresolved for years.

But with DOMA thrown out on “rational basis” grounds in a federal court, it should give hope to gay marriage advocates here in California that Prop 8 will suffer a similar fate.

Paul Hogarth has a J.D. from Golden Gate University in San Francisco. He is an attorney licensed to practice law in California, but this piece is not intended as legal advice. He was a summer intern for Equality California in 2005, organized volunteers in 2009 for the “No on 1” campaign in Maine, and helped live-blog the Prop 8 trial for the Courage Campaign.