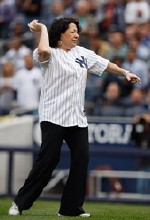 In honor of Hispanic Heritage Month, Supreme Court Justice Sonia Sotomayor threw out the first pitch at Saturday’s Yankees-Red Sox game in the Bronx. Sotomayor’s appointment was a signature achievement for the nation’s Latinos, and represents President Obama’s leading accomplishment for a constituency that helped elect him. But after Latino voters gave Democrats back the House in 2006 and victories in key states in 2008, it’s rather remarkable how coverage of their concerns and viewpoints have almost disappeared. On health care, the stimulus bill, climate change and virtually every issue other than immigration, Latino faces are not seen and their voices are not heard. The television news media is so averse to Latinos that we even have a lesbian hosting a major political show (the brilliant Rachel Maddow), while pundits from the Latino community are ignored. Celebrating Hispanic Heritage Month (Sept 15-Oct 15) without highlighting the media’s treatment of one of the nation’s largest and most potent political constituencies is like the National Secretaries Day promotion of raises, not roses – and seems to confirm that Latino power remains ground zero of the nation’s culture war.

As we celebrate the annual Hispanic Heritage Month, let’s hope the media uses this time to ask itself some hard questions. Because its ignoring of Latinos as a political community over the past year has been inexcusable, and its only getting worse.

During the 2008 Democratic Presidential primaries, early contests in Nevada, Texas and California brought national interest in Latino voting. This led to hopes that the long dormant “sleeping giant” Latino vote would emerge in November, and that Latinos would reap the political benefits of electing Barack Obama and a more progressive Congress.

But as the fall 2000 campaign ensued, I noticed a disturbing pattern. The media repeatedly visited bars in suburban Ohio and Pennsylvania to assess the feelings of the “white working class voter,” but was completely ignoring Latino voters in the equally swing states of Nevada, Colorado and Florida. The lack of interest in Florida’s non-Cuban Latinos was particularly odd, considering that the state was long considered a tossup and had been the chief focus of the 2000 and 2004 presidential elections.

After the election, Obama’s ability to capture white voters in the above Rust Belt states was analyzed to death, and often described as key to his overall victory. Yet the story of how an African-American candidate won record voter support among Latinos — remember all the stories that said Latinos wouldn’t vote for a black! — was almost entirely ignored.

It was as if the Latino role in electing Barack Obama was being downplayed, if not erased. As if pro-Obama activists had been so successful at turning out Latino voters in states Bush won in 2004 — Florida, Nevada, Colorado, New Mexico — that the media forgot that they had labeled all four to be “red” states prior to 2008.

Unfortunately, this pattern of media ignoring Latino voters and concerns has continued. Despite Latinos being significantly impacted by health care and the other issues shaping the national debate, our traditional news media employs right-wing hate mongers like Pat Buchanan while shutting all Latinos out.

For all of the media focus on whether right-wingers hate Obama more because he is African-American, the real “third rail” racial issue in the United States involves Latinos. This helps explain why a constituency that has become the nation’s largest ethnic minority nevertheless remains in the shadows when it comes to virtually every national issue other than immigration.

The media has run so many stories on the drive for health care reform that even the most avid political newshounds are tired. Yet how many national stories in print or on television can you recall where either a Latino expert was quoted, or a Latino family interviewed?

There has been a virtual “brownout” of Latino health stories, despite this constituency being as impacted by the lack of health care as much if not more than any demographic group. The only time I recall Latinos becoming the focus of health care reform was when Republican Joe Wilson said President Obama was “a liar” when he claimed that “illegal immigrants” would not benefit from health care reform.

Suddenly, the White House was all over the Latino health issue — namely, to emphasize that not only could undocumented immigrants not access the President’s new health plan, but would not even be able to purchase such health insurance with their own money. Rather than focus any discussion on Latino families health needs, the only time a Latino angle emerged concerned denying coverage.

Preserving a White and Black Nation

This exclusion of Latinos from the health debate, and from all public policy issues other than immigration, is neither coincidence nor accident. It is part of the same strategy that sees Latinos excluded from the cable political news shows, and from the Sunday interview shows on the traditional networks.

Simply put, United States media owners do not feel that presenting Latinos as equal members of the body politic, either as pundits or as interviewees, is good for ratings. They apparently see it as bad business to show the United States as having a politically influential Latino population, but good business to give Lou Dobbs a nightly show in which he is free to portray himself as the white bulwark against the invading brown menace.

While African-Americans do not host any of the top political news shows, and are grossly underrepresented throughout, Eugene Robinson of the Washington Post regularly appears and CNN has Senior Analyst Roland Martin and other pundits. And Barack Obama does provide a daily African-American face to lead news shows.

But except when discussing immigration, Latino experts or pundits are nowhere to be found. It is as if the media is trying to invent a “Second Life” United States where Latinos do not comprise a sizable minority, do not impact local, state and national politics across the nation, and do not shape the outcomes of presidential elections.

For all of the justifiable excitement over Sotomayor’s appointment, recall how the Republicans’ main line of attack was her often-repeated comment that she brought to the bench the perspective of a “wise Latina woman.” Both the White House and the nominee herself had to backtrack from this statement, as it raised the troubling notion — for the white-dominated media world — that Latinos may bring a set of experiences and perspectives otherwise lacking.

How can a traditional media that itself excludes Latinos, and that limits its signature political talk shows to white men, countenance a claim that a Latina has special insights about public policies?

Sotomayor’s comment hit a bit too close to home, which is why the media harped on it repeatedly, eventually forcing her to recant.

Such is the state of affairs as we celebrate Hispanic Heritage Month in 2009.