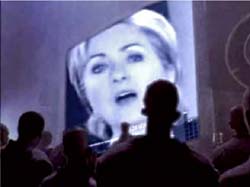 About a month ago, I was on a radio talk show (KALW-91.7 FM) to discuss the 2008 Presidential primary – when a caller predicted that this would be the “YouTube election.” Now that any web-savvy citizen can post a video online (or even create a mash-up video that satirizes a presidential candidate), elections will be decided less through conventional media buys – and more through the grassroots actions of political activists who may have no affiliation with a campaign. With this week’s release of the anonymous YouTube video lampooning Hillary Clinton as “Big Brother,” we know that the caller’s prediction was right. It’s a brave new world, and campaigns must learn to adapt.

For those who haven’t seen it yet, the video is a brilliant parody of Apple’s famous commercial from January 1984 – which introduced Macintosh computers to the world. I was six years old at the time, and a few months later my father bought us a Mac, which was our family’s first home computer. In the new video, Hillary Clinton is the “Big Brother” from the old commercial – while a woman with a Barack Obama t-shirt runs toward the large video screen, hurling a hammer at the last second to break the monotony.

The Obama campaign insists that they had nothing to do with it, and the author’s anonymity has only fueled more interest about the video. As for Hillary’s reaction, she replied to a group of bloggers that she’s “pleased” that the video is “taking attention away from what used to be on YouTube and getting a lot of hits – namely me singing ‘The Star Spangled Banner.’ Everybody in the world now knows I can’t carry a tune.”

Back in January, over a million viewers on YouTube watched Hillary Clinton sing the national anthem at a campaign event, and believe me – it’s painful to listen. While the clip was initially broadcast on television, it only picked up steam because average users could then just take the video and re-broadcast it on YouTube. Otherwise, we would have had to depend on large TV networks to decide which political gaffe is newsworthy.

The clues that this would happen were evident last year. Republican Senator George Allen would probably have been re-elected – if he hadn’t been so stupid as to call an Indian-American “macaca” while on tape. The filmmaker then posted the video on YouTube, and it soon became the butt of jokes on late-night comedy. The “macaca” moment allowed journalists to start snooping about Allen’s racist tendencies, and we soon learned what a twisted jerk he really is. If not for YouTube, we may never have had a Senator Jim Webb – and the Republicans would still control the Senate today.

The Internet has been around for over a decade, and in the last four years bloggers have made serious strides in how the media covers politics. But YouTube has taken the online medium to a new level. Blogs are good for political junkies who want to read the “inside” story, but there’s something about an online video that attracts more attention. Our society is more accustomed to watching the news than reading it, so YouTube is to the blogosphere as television is to newspapers.

Of course, there’s a difference between the “macaca” video that sunk George Allen’s career and the 1984 parody that reinforces what many people – fairly or not – think about Hillary Clinton. The lesson from “macaca” is that politicians must be careful what they say, which everyone can agree is a good thing. But the Hillary episode shows that even your statements or likeness can be manipulated to make a hilarious video. Unlike “macaca,” that’s something that a candidate can’t control.

And Hillary is only the latest victim of this phenomenon. John Edwards has Southern charm, but his vanity was displayed on YouTube in a less flattering light. Back in November, somebody put up a video of Edwards on YouTube where he combs his hair and looks in the mirror – probably in preparation for a TV interview. But the creator also added the song “I Feel Pretty” from the musical “West Side Story” in the background – to devastating effect.

Remember Howard Dean’s Iowa “scream” that killed his presidential campaign? While the television media was to blame for blowing it way out of proportion, Internet enthusiasts also played a hand. YouTube did not exist at the time, but a website called “Dean Goes Nuts” was created – where bloggers remixed Howard Dean’s speech with “Welcome to the Jungle” by Guns ‘N Roses, “Throw it Up” by Lil John, and even “Kokomo” by the Beach Boys.

But remixing and distorting someone’s statements or videos for political gain is nothing new. For decades, candidates have taken videos of their opponents and added music in the background for a powerful TV commercial. In 2004, for example, the Bush campaign took footage of John Kerry windsurfing to make a negative ad about him being a “flip-flopper.” The YouTube parody of Hillary Clinton as “Big Brother” or John Edwards and “I Feel Pretty” is just the latest incarnation of a very long tradition.

What YouTube does is allow any person who knows how to put up a video online to play the game – and get wide exposure. In the old days, only well-paid political consultants and the campaigns who hired them could do this – and they had to pay ungodly amounts of money to put such commercials on television. YouTube democratizes the political system, by letting grassroots activists drive the debate about how candidates get covered.

Although I don’t like Hillary Clinton and am a big fan of the latest YouTube video, I am very uncomfortable that it is anonymous. But there’s no question that the creator’s anonymity (and the fact that it was obviously not an amateur) has sparked more interest in it. I also believe the Obama campaign when they say that the creator is unaffiliated with their operation, and that they’re as clueless as we are as to who did it.

But anonymous hit-pieces – even if done artfully well – are not a good thing. If the 1984 parody had been displayed on television, campaign finance law would have required the creator to disclose its identity so that they can be held accountable. For now, the clip is probably harmless fun – but will it spawn more attacks on YouTube from sources who refuse to let the world know who they are?

It’s too soon to tell, but there’s one thing that we know for sure. The YouTube election has arrived.