Hillary, if you’re in to win, stop the war spin 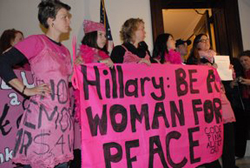 “Senator Clinton, we’re blocking your door, until you cut this web of war!” was the chant heard through the halls of Congress outside Hillary Clinton’s office last Tuesday, where activists with the women’s peace group, CODEPINK, asked Hillary to stop supporting funding for the war in Iraq. 50 activists entered Hillary’s office and effectively wove themselves into a web of pink yarn and ribbons to symbolize the senator’s web of deception and the innocent people—Americans and Iraqis—caught in it. The group asked Hillary to pledge to fund college scholarships and healthcare, an issue the senator triumphs, not bombs and destruction. Activists held banners that bared slogans such as, “Hillary: Be a Woman for Peace” and “It takes an Invasion to Raze a Village,” and donned pink slips with the “Cut the Funding” message. After being forced out of Clinton’s office, six women were arrested while blocking Clinton’s door.

Those arrested included three Bay Area residents—Heather Box, Leslie Angeline, and myself. We were compelled to urge Senator Clinton to take leadership from our representatives, Lynn Woolsey and Barbara Lee, and stand up for peace. New York resident and arrested activist Sonia Silbert captured this sentiment when she said, “As young women we’ve been inspired by the powerful women who have paved the way and we’ve all been waiting to vote for a woman for president. But we want a woman who stands for values we can be proud of: the values of peace and justice, and healthcare not warfare.” Heather Box also stated, “I am here to represent my friends that are serving in Iraq because they cannot be here- and they want to be here. They want to come home and they want to be taken care of when they get here.”

Some progressives may still be asking why activists would go after Hillary. Why not keep on the Bush administration or the other neoconservative powers that be? Hillary has admitted to making the wrong choice on Iraq, yet remains unapologetic and unwavering in her dedication to continue funding this grossly mismanaged and misguided war. She is calling for a cap on troop levels, but has not addressed a timeline for an end to the occupation. She has never met an Iraq war supplemental she didn’t like, and its doubtful she will vote against the $100 billion supplemental this spring. Hillary, if you are in it to win, you better stop the spin.

Hillary prides herself on listening. We want her to listen to the majority of the people in the United States (specifically over 62% of our nation’s women) who are calling for an end to the war in Iraq. We want her to listen to the majority of our troops in Iraq and to the Iraqi people themselves, 71% of whom are calling for a troop withdrawal within a year or less. We want her to stop funding the war, and to start talking about a real exit strategy, not just a troop cap. Are you really listening Hillary? Can you hear the young women of this country begging for better education and healthcare, not bombs and war?

Back in 2003, CODEPINK gave Hillary a pink slip symbolizing our disappointment after she voted to support Bush and the invasion into Iraq. Last year, CODEPINK activists in New York City started a national Listen Hillary campaign (www.listenhillary.org),
tracking her statements and bird-dogging her as she makes appearances
throughout the country. Though she was not in her office on Tuesday, the statement
was made to her staff that women are ready for a woman president, just not one who supports war.

The action at Hillary’s office was part of a week of peace demonstrations at the Capitol. The week started on Friday, January 26, with the construction of an Iraq war memorial on the Mall. The reverent memorial, “Walk in Their Shoes,” was a large plexiglass box filled with over 6,000 pairs of shoes individually tagged with the names of Iraqi civilians who have been killed in the war. Saturday’s sunny anti-war rally was staged next to this memorial and featured speeches from a wide range of speakers, including Congressional representatives Maxine Waters, Lynn Woolsey, John Conyers, and actors Jane Fonda, Susan Sarandon and Sean Penn. An estimated 500,000 demonstrators encircled Congress in a march that lasted over three hours.

Understanding that weekend marches aren’t enough to make change, over 1000 visiting activists stayed in DC through Monday, January 28, and lobbied 400 Congressional offices from 48 states. Peace lobbyists asked their representatives to commit to defund the war, investigate the war crimes and fraud executed by the administration, and prevent any aggression with Iran. CODEPINK activists converged in the Senate Hart building and dropped a series of pink banners and a giant pink slip that read “Stop Funding War!” from the inner balconies while chanting and successfully garnering attention from Congressional staff and stopping business as usual. After the banner drop, California activists met with legislative aides from the offices of Senators Boxer and Feinstein. Both meetings were so large—greater than 40 people—that the groups had to remain in the atrium of the building. During the meeting with Feinstein’s aides two parents who lost their child in the war spoke, and the group presented the staffers with a pair of children’s shoes tagged with the name of an Iraqi toddler who was killed in the war. It’s up to us to keep bringing the heart into the debate, and to ensure that our elected officials don’t forget the mandate for peace under which many of them were elected in November.

This week also marked the death of beloved lifelong activist and author Molly Ivins, who commanded us in her final column to take action: “We are the people who run this country. We are the deciders. And every single day, every single one of us needs to step outside and take some action to help stop this war. Raise hell. Think of something to make the ridiculous look ridiculous.”

Today, Monday, February 5, President Bush is expected to release his request for more funding for the war in Iraq. Activists around the country will begin the Occupation Project—a sustained campaign of civil resistance to ensure that their representatives will not support further war funding. So in the name of Molly and all of the lost lives from the war on terror, let’s give ‘em hell.