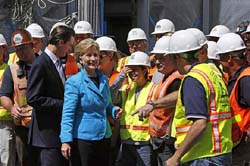 Until the past weekend, Hillary Clinton had done surprisingly well among white and Latino working-class voters earning under $50,000 annually. According to Clinton supporters, this backing is well-earned. Clinton’s standard stump speech attacks the Bush Administration for sending good-paying American jobs overseas, and she routinely talks about the Clinton Administration’s success in bringing economic gains to all income levels during the 1990’s. But as with other aspects of Clinton’s self-proclaimed “35 years of public service,” there is more to this story. For example, the Clinton Administration fought to enact NAFTA, the free trade agreement that soon shifted high-paying manufacturing jobs from the United States to Mexico. Senator Hillary Clinton has never called for NAFTA’s rescission, despite vaguely acknowledging its negative impacts. Further, the Clinton’s entered office in 1993 with the federal minimum wage at $4.25 per hour and left in 2000 with the hourly minimum at $5.15; a whopping eight penny increase in constant 1996 dollars. So what’s the key to Clinton’s working-class support? It may be that her connection to Wal-Mart, decried by progressives, is nonetheless seen as a positive by the millions of working-class voters who either work or shop at the nation’s largest retailer.

Hillary Clinton did not do well this past weekend, a result she anticipated when she stated on February 8 that “many of her supporters would be too busy working to break away from their schedules and spend the time to caucus for her.”

But through Super Tuesday, Clinton had done exceptionally well winning the votes of white and Latino voters earning under $50,000 annually. This is despite many viewing Barack Obama as the more progressive candidate.

How has this happened?

Many believe that Clinton has offered a more compelling economic message. This message is bolstered by voter recollection of the good economic times of the Clinton presidency, particularly as compared to the last eight years.

Columnist David Sirota argues that Obama is restricted from waging a more populist economic campaign by concern that the media will begin identifying him with Jesse Jackson. The idea is that if an African-American proposed the type of anti-corporate agenda of a John Edwards, the establishment press would ruthlessly caricature them.

Clinton could also be doing well among working-class voters because her actual record, and that of the Clinton Administration, is little known. And when one’s record is little known, a candidate is free to fill this blank slate with promises that conflict with past events.

Consider Dolores Huerta, who was all over the media from the Nevada caucus through California praising Clinton and bashing Obama. Huerta told the public that Clinton had always been on the side of working people, whereas she did “not even know” Obama.

But when an independent media reporter asked Huerta about how she explained her support for Clinton in light of Hillary’s support for the anti-worker NAFTA, her answer was curious.

Clinton’s alleged opposition to the biggest job exporting trade agreement in decades may be “fairly clear” to Huerta, but it is contrary to the historical record. And if Hillary Clinton always opposed NAFTA, it is odd that she doesn’t highlight this during debates or vow to revoke the agreement if elected President.

Obama can be faulted for not making sure voters know about Clinton’s strong support for NAFTA’s passage, but he has had to walk a fine line on a number of issues to avoid the media accusing him of “Hillary bashing.” So a better question is why manufacturing unions are not informing voters that Clinton’s stated concerns about outsourcing ignore the Clinton Administration’s role in contributing to this problem.

While a President’s control over income inequality is limited—such inequality rose dramatically during the Clinton Administration, partially fueled by technological advances and the dot-com boom—the nation’s leader can push to increase the minimum wage. Hillary Clinton wins votes arguing that workers deserve good wages, but between 1993-2000 the Clinton Administration raised the federal minimum by only ninety cents in actual dollars and by eight cents when adjusted for inflation.

Interestingly, Bill Clinton did not win a minimum wage hike until 1996, despite taking office with a Democratic-controlled Congress in 1993. It seems that raising the minimum wage for working people was not among Clinton’s top priorities, a fact few of today’s voters appear to recall.

Bill and Hillary Clinton launched their political careers in Arkansas, at a time when Wal-Mart was a growing giant and a powerful opponent of attempts to raise the federal minimum wage. A recent one-day news story showed Hillary Clinton at a Wal-Mart Board meeting (she served on the company’s Board for six years) sitting quietly while a company officer was bashing unions and worker rights.

Think the Clintons’ experience in Arkansas had something to do with their reluctance to raise the federal minimum even during a decade—the 1990’s—of spiraling housing and health care costs? Or was this another issue in which Hillary silently disagreed with her husband?

Keith Olberman may have inadvertently identified the heart of Hillary’s working-class appeal when he recently observed that Obama’s supporters were drinking coffee at Starbucks, while Clinton voters were shopping at WalMart. WalMart is the nation’s largest employer and the daily destination for millions of shoppers, a large number of whom are voters.

Whereas progressives think highlighting the Clinton-WalMart connection is a good strategy for shifting working-class votes away from Clinton, it may be a subtle reason for her unexpected success among this population.