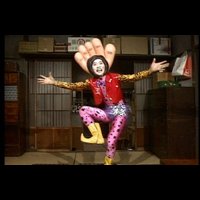 “Ex-Drummer” inaugurated the newly revamped Roxie Theater. The theater’s freshly painted walls and new seats with cupholders seemed to clash with the Belgian film’s “cheerful” depiction of rape, heavily trashed urban areas, and sudden violence. But no, Koen Mortier’s film held up the wonderful Roxie tradition of screening films guaranteed to piss off the staid. Music is the electricity that powers this film, from the engine that drives the film’s plot to the soundtrack to all the musical performances seen onscreen. The hard and fast songs that pepper “Ex-Drummer” have no truck with social niceties. Even a cover of Devo’s “Mongoloid” gets in the listener’s face and aurally dares the listener to avert their eyes.

At its best, “Ex-Drummer”re-purposes visual language to inventive effect. Usually visually forgettable opening titles become visually vital messages when they’re presented as faux bumper stickers, office signs, and even tattoos. Visually re-winding three of the main characters’ bicycle ride soon moves beyond bratty cleverness into effective revelation of those characters’ backgrounds.
Where director Mortier trips up is in failing to make the viewer want to care about learning these characters’ fates. Central character Dries unashamedly admits he’s an upper-middle class yuppie slumming for kicks among lower class self-identified losers. Dries’ fellow bandmates aren’t much better socially. The Feminists’ lead singer, for instance, gets off on brutally beating up women. Yet Mortier does nothing to make viewers overcome their better natures and actually enjoy seeing the film’s barrage of social offensiveness. Negative remarks about women, gays, and the mentally ill are offered without ever tempting the viewer to the social dark side. “Ex-Drummer”’s trendy nihilism eventually erodes viewer attention.
Tim League’s anthology film “Super Happy Fun Monkey Bash!” didn’t have to worry as often about retaining viewer attention. Except for a way overextended sequence involving a pie attack, the 2008 compilation of Japanese television’s bizarro ads, strange comedy, and extreme game shows made for oddly hypnotic viewing.
Briefly seeing Britney Spears, Jodie Foster, and even Governor Schwarzenegger shill snack food or home entertainment systems makes one wonder about Japanese companies’ awareness of these celebrities’ American cultural significance. But jaw-dropping is the best adjective for some of the all- Japanese ads. A lumber company using a naked woman to sell its wooden plank puts a new spin on the term “hardware.” However, unintentional weirdness is the best description for a short dramatic superhero commercial involving an instant ramen superhero who saves the day when hot water is poured into the bowl on his head.
The clips are presented without narration or even a smattering of explanation of Japanese cultural norms. The unaware viewer may naturally conclude the Japanese are berserk lunatics. Yet keeping concentrated and controlled while in incredibly stressful situations is a value familiar to American audiences. However, it should also be acknowledged that the makers of these Japanese shows seem oblivious that these demonstrations of will power often take flying leaps into the absurd. One sequence follows a guy living a normal day while getting continually whacked by shaving cream pies. Yet the guy’s “normal” routines quickly appear to be artificial setups for further pie attacks. Any humor is quickly lost to ad nauseum repetition. By contrast, “Super Happy Fun Monkey Bash!”’s climax makes more plausible use of the will power principle thanks to its use of trained actors and falling aluminum pans.
“Harrison Montgomery” starts off mining more realistic and grimmer territory. Its setting is San Francisco’s Tenderloin. Its characters include a badly indebted small time drug dealer and a budding artist trapped in an abusive relationship. Yet the titular character, a man obsessed with the secret messages in TV game shows, turns out to be the key to more hopeful lives for the film’s struggling charcters.
The film earns karma points on several levels. Filming in San Francisco, and particularly in the Jones Street area of the Tenderloin, highlights a part of San Francisco generally ignored in feature films. One can see footage of the Tenderloin’s Hotels Bond and Gaylord in this feature. Also, the film’s title role proved meaty enough to attract the interest and support of veteran actor Martin Landau. Not only did Landau agree to play Montgomery, but he executive produced the work and brought in veteran actor Diane Baker.
Where “Harrison Montgomery” starts to go astray is in its attempts to convince the viewer that these marginal characters lead unique and even magical lives. That would be a noble goal by itself. Yet the filmmakers also wanted to acknowledge the realities of the characters’ apparently dead-end lives. To that end, a combination of animated sketching and narrated backstory is frequently used to tell the viewer about the secret lives of apparently mundane characters. Not only does the effect feel like lazy story-telling, but the resulting portraits neither achieve heroic ordinariness nor fanciful originality. An African-American panhandler, for instance, turns out to be the literal descendant of African royalty. Only Montgomery can be described as a unique character.
The plotting also fails to surprise the viewer. The sure fire drug deal predictably goes south. Richie and the single mom eventually meet and bond with each other. The only real startling moment comes with Landau’s final scene. It ends with a visually beautiful image, but it also feels like an abrupt change in tone.
The performances generally do convey the points the script wants to make about the characters. Melora Walters’ single mom does want to have a relationship with a man who won’t consider her daughter a liability. But the newer actors fail to demonstrate their characters possess a life deeper than what the viewer sees onscreen. Only veteran actors Landau and Baker manage to convey the tender custodial relationship between their characters.
In the end, “Harrison Montgomery” winds up being a noble failure. It’s well-made enough to keep a viewer reasonably entertained. But it can’t be called memorable.
(The San Francisco Independent Film Festival continues at the Roxie Theater (3117-16th Street, SF) through February 19th before moving to the Shattuck Cinema in Berkeley. “Ex-Drummer” screens again at the Shattuck on February 19th. “Harrison Montgomery” screens again at the Shattuck on February 20th.)