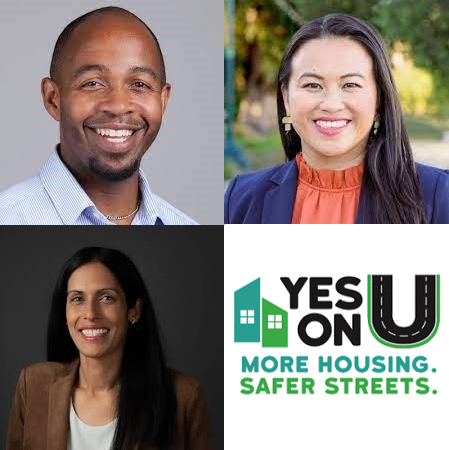 Which Way Will the East Bay Go?

Berkeley and Oakland are at a crossroads. But for different reasons.

Berkeley’s council majority has moved the city in a progressive, urbanist direction. The November election either solidifies this shift or sends Berkeley backwards. Oakland’s mayor’s race occurs amidst major questions involving the A’s stadium, rising fears about violence and crime and increased homelessness. Voters hope to elect a mayor who will successfully navigate these issues.

Here’s our analysis of many of the key election issues.

Terry Taplin’s election to D2 in November 2020 was a game-changer. It shifted Berkeley’s council from being notoriously anti-housing (which I describe in Generation Priced Out) to implementing a pro-housing, pro-bike paths and a broad urbanist agenda.

I am a big admirer of Kesarwani, who I have endorsed and donated to (Berkeley has a $60 donation limit). Kesarwani was not intimidated by homeowner opposition to sufficient new housing at the North Berkeley BART station. She champions housing at BART and throughout the city. Many yards with signs for her leading opponent, Elisa Mikiten, also had signs opposing “towers” at BART (Mikiten backed the 7-story plan).

Voters who like Berkeley’s current direction have an easy choice. Stick with Rashi.

Mark Humpert is running to replace Lori Droste. Droste set a high bar for integrity, hard work, policy brilliance, and people skills. She and her political allies believe Humpert is the best candidate to carry out Droste’s urbanist policies. His chief opponent is Mari Mendonca, who challenges the city’s need to comply with state housing mandates.

Berkeley also has Prop L, which would fund 1500 affordable housing units in Berkeley. Overall, Prop L brings $300 million for street paving and traffic safety work, $200 million for affordable housing and $150 million for other infrastructure needs. Unfortunately, real estate interests are opposing this measure which otherwise has broad support. Given the well funded opposition, reaching the 2/3 threshold for victory could prove difficult.

Two of the four leading candidates—Loren Taylor and Treva Reid —appear aligned with the policies of Mayor Libby Schaaf.  A third candidate, Ignacio De La Fuente, is so heavily funded by King Coal that you’d think he was running in West Virginia. Sheng Tao is the clear progressive in the race (See my story, “Sheng Thao Unites Oakland Progressives for Mayoral Run,” Nov 16, 2021).

The mayoral election occurs with the A’s stadium still up in the air. Oakland has had bad luck with its sports teams. The city made a terrible deal with Raiders owner Al Davis, and then saw his son move the team to Las Vegas. The Oakland A’s baseball team is controlled by one of the worst owners in professional sports.

John Fisher has completely botched plans for a new A’s stadium. He could have had everything he wanted for a stadium by rebuilding on the current site—but he instead chose to see how much public money he could extract before either getting a taxpayer-funded stadium on his terms or selling or moving the team.

The three leading candidates all pledge to help negotiate a deal they can support. But all have caveats.  These caveats reflect the project’s financial uncertainty as well as skepticism about the A’s commitment to building affordable housing.

Howard Terminal has evolved into a municipal nightmare. It will be a financial boondoggle, diverting Oakland’s economic resources into an area whose core facility is unoccupied 75% of the year.

I can’t see the council ever reaching a deal with Fisher.

I know the political risks for mayors’ accused of “allowing” teams to leave. But Oakland voters will not pick a mayor who they feel will give carte blanche to the A’s.

The mayor’s race is primarily about crime/public safety and homelessness. It’s unclear how a new mayor can meaningfully improve upon Schaaf’s record.

Readers of Darwin BondGraham of Oaklandside know that Oakland increased its police budget by nearly 18% from 2019-21. Claims that the progressive council “defunded the police” are false. Yet many voters will use this false belief to vote for a candidate other than progressive Sheng Thao.

Since homelessness emerged in 1982 the national Republican Party has blocked the affordable housing funding needed to end the crisis. Earlier this year the Republican Senate stopped a huge homelessness funding plan in Build Back Better (Senator Manchin prevented 50 Democratic votes but no Republican supported it).

Republicans know their inaction shifts blame to Democratic mayors. So the public blames mayors from cities like Oakland for not “solving” a crisis whose solution requires massive increases in federal funding that Republicans block.

One way to help alleviate Oakland’s homelessness crisis is passing Prop U. Prop U brings $350 million for affordable housing,  $290 million for transportation and $210 million for infrastructure. Brooke Levin, a longtime activist who led the successful Measure Q campaign in March 2020 to fund parks and homeless services (she is also my cousin) believes that “without a new infusion of bond funds there is no other source of funding to address these needs.” Trust Brooke on this.

Those concerned about homelessness should also back Prop V, which expands tenant protections under the Just Cause for Eviction Ordinance (keeping people housed reduces homelessness). And dynamic public interest attorney Janani Ramachandran is running in Council District 4—she will make tenants rights and affordable housing a priority (I have endorsed her).

Will Oakland Stay the Course?

I suspect most voters have yet to make a decision. Many in Oakland are understandably more focused on Democrats keeping the House and Senate than on the city’s mayoral campaign. The three leading candidates are still in their first council terms. All lack citywide name recognition

Schaff is backing Taylor while labor is going all out for Thao. Reid is only in her second year on the council and lacks the fundraising and political connections of her rivals. De La Fuente has failed in prior mayoral races and Oakland is not electing the champion of King Coal.

In light of Councilmember Rebecca Kaplan’s likely election to the Alameda County Board of Supervisors, expect Taylor or Thao to run for that citywide seat if they lose the mayor’s race.

I’ll hold off making a forecast until my November 7 election predictions story. But when you have three “moderates” and one “progressive” in a ranked choice voting system, the path to victory is clear.