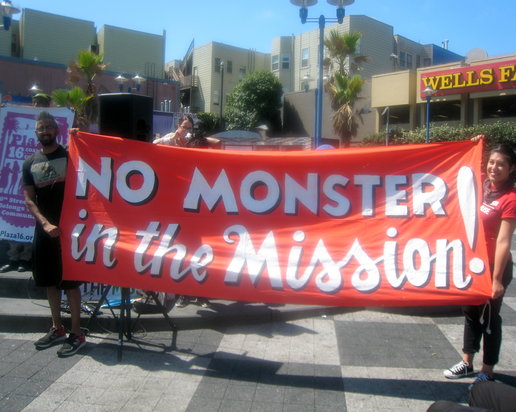 A political earthquake just hit San Francisco when, amid much controversy, plans for construction of 331 high-end rentals and deluxe condos in the heart of San Francisco’s working-class Mission District collapsed.

Designed for the busy neighborhood transportation hub of 16th and Mission streets, the ten-story housing complex by Maximus Real Estate Partners, would have been the largest ever built in the history of the neighborhood.

Yet, it all came down before it ever went up.

Not because of an “Act of God” or the “San Andreas Fault,” but largely because of almost two years of community protests at the proposed construction site, packed permit hearings and even a very large occupation of city hall.

Maximus, itself, suggests “the community opposition became aware that their efforts could cause (Maximus) to fall out of the picture.” Pointing the finger elsewhere, Maximus doesn’t want to take the blame for the deal falling apart after they failed to meet a contract deadline with the landowners, the Jang Family Trust.

Monster in the Mission

Dubbed very effectively by activists as the “Monster in the Mission,” the luxury plan took a drubbing in public opinion. Why?

Because none of the premier accommodations would have been affordable for low and middle-income local residents who currently face, according to the Plaza 16 coalition, “soaring rents, increasing evictions and an onslaught of high-end housing.”

That’s why, at 12 noon, Monday, August 24, on the very same corner location of the investors’ contrived and far-removed “Monster” recipe for upscale living, there were more authentic, local neighborhood voices celebrating its implosion.

When asked if she was happy about the Maximus deal falling through, she leaned forward, placing her hands on my shoulders, “Are you kidding? I’m thrilled!”

After a few moments of smiling, she quickly added “It shows activism pays off. Now we’ve got to get back to working for more affordable housing.”

It was this gritty determination that was very much on full display as rally speakers spoke of more “Monsters” that must be taken on, mentioning specifically the “Beast on Bryant St.,” a nearby luxury condo private development on land that is otherwise eligible for federal funding of 100% affordable housing.

So, Plaza 16 coalition representative Andy Blue told me, “The ‘Monster’ is just one victory in a long struggle against very powerful financial interests.”

As San Francisco developer Eric Tao of AGI Capital frankly admitted, “having a site in the Mission that you can develop housing on, it’s gold. I don’t care what the market’s like. Even if the market’s at its worst, that’s gold because everyone wants to be in the Mission,”

Of course, by “everyone,” Tao is referring to those paying top dollar.

These profit impulses are driving the dispute between outside investors and the mostly Latino families, youth, artists and politically active residents in the sunny, warm Mission, where all the broader class, social and financial conflicts of our nation are being played out.

Currently, there are about 500 housing spaces approved for construction in the neighborhood but, so far, only 34 affordable that would be below San Francisco’s extremely inflated market rate.

This is an even worse percentage than the 627 housing units built in the Mission since 2009 when the San Francisco Business Times reported there were 9.6 percent affordable for low-income residents.

These disturbing numbers stoked the fears and anxieties of neighborhood residents and ignited a heightened level of activism.

And now, since the fall of Maximus (not to be confused with the far more imposing Roman politician and general), there is more optimism.

It is evident in the smiling and proud faces of encouraged activists. 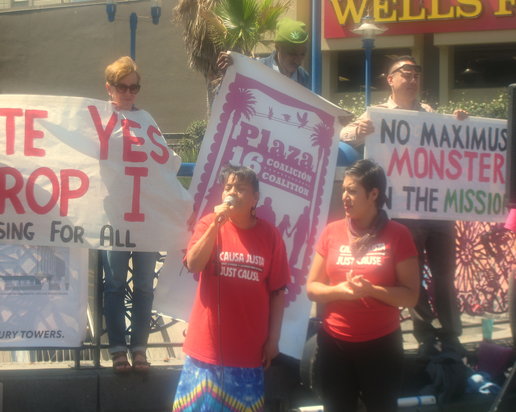 But Maximus is Not So Happy

Claiming to have already spent eight million dollars, Maximus has filed a lawsuit attempting to get their money back from the Jang Family.

The lawsuit charges that the Jang’s had another developer in mind who was offering more money and that was an incentive to get Maximus out of the picture. But, in essence, Maximus is mostly whining about the extensive public debate that they allege sabotaged the whole project.

Such drama and intrigue between wealthy investor and rich landowner is not uncommon, but Plaza 16 activists want no part of it.

The intramural quarrel between Maximus and the Jang’s over upscale property dollars and development is not our fight, protestors insist.

Plaza 16.org leader and Mission neighborhood parent Bianca Gutierrez emphasized this by telling the media that “we are hopeful that the Monster has been slayed, but we are not interested in another high-end developer proposing more of the same.”

Instead, the coalition wants Mayor Lee to purchase the “Monster” site from the Jang Family and to develop it into 100% affordable housing.

In fact, the city does dedicate tax money generated through its Housing Department’s “real estate activities to the development of affordable housing.” And, Mayor Lee has agreed to set aside around $250 million from that fund.

Housing activists tell me there is a definite and desperate need for public funds as an alternative to private development that pushes people out. However, I am also told, that the lowly amount suggested by the mayor is insufficient and on this issue, activists again hope for public support to make the difference.

Already, some city elected officials have called for the mayor to double the expenditure to support construction of affordable housing.

This is not an issue that is going to be solved anytime soon. Too much money can be made. As developer Tao says with great anticipation, San Francisco real estate is like gold.

But displaced residents have seen first-hand the unsavory side of the modern golden era and how it is ushering in a new era of speculators and rogues.

Activists are, therefore, looking forward to Prop I, a November ballot initiative that will put an 18-month moratorium on virtually all development and demolition in the Mission with exceptions made only for affordable housing, until such time as a master plan can be developed that addresses the urgent issues of mass evictions, displacement and gentrification.

Fair-housing advocates call it “a Pause for a Plan.”

Along with obtaining city funding for affordable housing and fighting against high-end developments such as the “Beast on Bryant,” organizers say Prop I is the next big step to slow down the “bleeding of displacement.”

With renewed confidence, the community activists assembled at 16th and Mission seemed ready for taking it all on. You could see it in their eyes and hear it in their voices as several assured me “we are ready for the long haul. It’s their investments, but it’s our homes!”

Carl Finamore still lives in San Francisco, just barely, and is Machinist Lodge 1781 delegate to the San Francisco Labor Council, AFL-CIO. He can be reached at local1781@yahoo.com