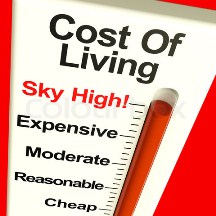 Ever since fixing school food became a trendy issue a few years ago, not a week goes by that I don’t get asked The Question. It comes from students, from parents, from school staff, from people I meet at parties who discover I know something about school food. Invariably, the person asking The Question has just read a riveting report on how a school district somewhere is raking in big bucks by serving every student a free breakfast in the classroom, or seen a TV news report on how another district just put salad bars into every elementary school, or listened to an interview with a “miracle worker” who has brought back scratch cooking at schools for less than the cost of processed food. The Question is always, “Why can’t San Francisco’s schools do this?”

One of the many ways in which school districts differ in their ability to provide healthy and tasty fresh meals to their students is labor costs. Although the government payment for a free school lunch is set by Congress at the same rate throughout the lower 48 states (with Alaska and Hawaii receiving slightly more), labor costs vary widely from state to state, even from community to community.

This chart (in Excel or pdf) shows salary ranges for the lowest paid cafeteria worker job at 46 school districts around California. At first step, these jobs may pay less than $9/hour, or more than $14/hour, for similar skills and duties. As workers advance up the salary steps, per their union agreement, some may reach a top step of less than $12/hour, while others at top step earn over $19/hour.

In this comparison of almost 4 dozen California school districts, San Francisco has the third highest first step base salary, paying $14.10/hour to those hired since July 2011; only Palo Alto ($14.28) and Garden Grove (where food service workers are hired in at second step of $14.88) pay more.

At $19.71/hour, SF has the highest base salary at top step, almost $2.50/hour higher than the next highest paying districts and more than $8/hour higher than the lowest paying district. At the start of the current school year in August 2012, about 30% of San Francisco’s “student nutrition workers” (as this position is called) were earning $19.71/hour, while about 10% were earning $14.10.

San Francisco pays its cafeteria workers more than other school districts because SF has such a high cost of living, and with most entry level workers doing only a 3.5 hour shift, it is unreasonable to expect them to commute in from a possibly cheaper outlying community for such a short work day. People have to earn enough to be able to live, but it does mean that SF is limited in the number of workers it can afford to hire.

This plays out in several ways in SF cafeterias. It means students may wait in line longer to get their lunch, because nearly every elementary school has only one cafeteria worker, thus only one line for food service and payment.

It means that most elementary schools are not likely to ever get salad bars. As Student Nutrition Services discovered when salad bars opened in about a dozen elementary schools a few years ago, the tongs that students are supposed to use to serve themselves are hard for the youngest students to handle. Some of them give up and just reach into the bin with their hands to grab some cherry tomatoes or baby carrots, a clear Health Code violation. A properly run salad bar for this age group requires adult supervision, both to help those who have trouble serving themselves, and also to restock the tomatoes and carrots when they run low.

However, the lone SF elementary school cafeteria worker must be at the end of the lunch line, to make sure the students properly use the Point of Sale terminal to record their lunch as free, reduced or paid. Failure to properly record lunches is grounds for government payment being withheld if it is observed during one of the reviews which the California Department of Education regularly performs; this was one of the infractions that resulted in the state withholding from SFUSD $11 million in government funding for over 8 months, a few years ago.

Thus, placing a salad bar in every elementary school would require hiring an additional worker for each site, something for which SFUSD’s Student Nutrition Services, already running a $2 million deficit in 2011-12, has no budget.

It also means that it would be harder for SF to generate the kind of positive cash flow from an in classroom breakfast that some other districts with lower labor costs have realized. Currently SF cafeteria workers have about 60 minutes to complete breakfast service for the few dozen students who come to the cafeteria, and who use the Point of Sale terminal located there to pay for their meal.
Packing insulated bags with enough meals to feed hundreds of students for a universal in classroom breakfast, delivering the bags to a dozen or more classrooms, retrieving the bags, and recording every student who chose the meal so that they are properly claimed for government payment, cannot be accomplished here without adding additional labor.

Lemon Grove School district in Southern California pays between about $3-6 per hour less to their cafeteria workers than SF pays, and yet they still rely on “teachers, staff, students or parent volunteers [to] bring breakfast to classrooms in insulated bags”, according to California Watch. This saves money for Lemon Grove, although not as much as in Compton Unified, where labor costs even less than Lemon Grove, and where California Watch reported that students both bring the insulated bags of breakfast from the cafeteria and also return the empties, saving even more on labor.

A 2011 article from The Bay Citizen, which also ran in the New York Times, describes a classroom breakfast at an Oakland school, where volunteers are also deployed. “At Melrose Leadership Academy in East Oakland, every day, the school serves about 200 free breakfasts to its 285 students. After Melinda Ayadi gave a lesson about the alphabet recently, each of the 25 desks in her classroom held a serving of cereal, graham crackers, milk and a nectarine. Parent volunteers had set up the breakfast, which was provided by the school cafeteria. By 9 a.m., the kindergartners were spooning Froot Loops.”

The regular use of volunteers to perform what should be the duties of a paid worker is specifically prohibited in SFUSD’s agreement with SEIU Local 1021, the union representing SFUSD cafeteria staff. Section 11.3 of the agreement states “The District shall not utilize unpaid volunteer, GA workers, SWAP or GAIN workers to permanently replace vacant bargaining unit positions.” So while schools in Oakland, Compton, or Lemon Grove may be able to turn a profit on breakfast in the classroom because of a combination of lower hourly wages for cafeteria workers and the judicious use of student and parent volunteers, SFUSD does not have those options.

Government meal program options like Provision 2, that feed all students for free in exchange for eliminating the claiming requirement, are only feasible for schools with 85% or more low income students; SFUSD’s average is about 60%. Feeding all students free becomes costly with fewer low income students, because the school district must pick up the cost of feeding the children who do not qualify for free or reduced price meals.

I asked someone I know at a leading anti-hunger organization if she could point me towards any studies of school districts with around 60% low income students, as SF has, that have been able to afford to do a breakfast in the classroom program using only union labor, not students or volunteers. Unfortunately, she was not immediately able to identify any.

This chart is not intended to present a complete picture of all school cafeteria labor costs in California. It does not include benefits, longevity pay or differential pay for which workers may qualify. It excludes school districts, like San Mateo-Foster City School District, that do not put salary information for cafeteria workers online. Others, like Long Beach Unified, were excluded because the most current information was over4 years old, or because it was unclear what the hourly rate was (like Bakersfield City School District). Other notes on the chart detail the limitations of its information.

Still, examining first and top step base salary for entry level workers does provide one data point for what a school district’s overall labor costs are relative to other districts. With salary levels at the top of the heap, SFUSD is at a clear disadvantage when it comes to being able to offer labor intensive meal programs within the tight confines of uniform federal meal funding.

California Governor Jerry Brown has been quoting Aristotle to explain the rationale behind his new proposal to send more money to schools with higher numbers of disadvantaged students. “The worst form of inequality is to try to make unequal things equal”, said the ancient Greek philosopher, and while Gov. Brown applies that reasoning to education funding, he could just as easily be talking about school meal funding.

Why is it so hard for Congress to grasp that school meal programs in higher cost of living places like San Francisco need to be funded at a higher level than, say, Wichita Falls, Texas? Maybe they think the “fair” thing to do is to just pay every school equally for each free meal served, but as Governor Brown said in his State of the State address on January 24th, “Growing up in Compton or in Richmond is not like it is to grow up in Los Gatos or Beverly Hills or Piedmont. So we recognize that. … It is fair. It is right. It is just…This really is a classic case of justice. To unequals, we have to give more to approach equality.”