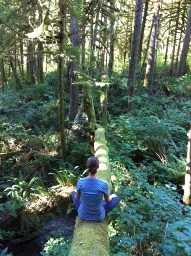 The sun is barely beginning to rise outside and the sky is that color, sort of a thick, glowing gray, like somebody threw a wool blanket over a lamp.

I don’t need to wake up for another couple of hours and yet here I am, 6:00 a.m., already on my second cup of tea and a gluten-free bowl of cereal. Why? Well, for one I told a friend I’d give the gluten-free thing a try; see how it makes me feel. Truth be told, I completely forgot about it last night and was already half-way through a delicious chocolate chip cookie before I remembered, nearly choked, and spit the rest out. So, so far, not making me feel awesome.

And for two, after all of the talks I’ve listened to from Dr. Wayne Dyer on creativity, I know by now that if something wakes you in the middle of the night, no matter how tired you are, you better drag your sleepy butt out from under the covers and sit with it.

According to good old *Wayne there is an almost magical hour in the middle of the night—somewhere around 3-5 a.m., when you are your most creative; when you are the closest to Source, or God, or the Universe, or whatever else you want to call it, that you will be all day. This is a time when most people get up, go to the bathroom, maybe get some water; but my man *W suggests that you get up, put your feet on the floor, and meditate. As the poet Rumi said, “The morning breeze has secrets; don’t go back to sleep.”

What is the Universe trying to tell you?

After my brief 5:30 a.m. meditation, I discovered that the Universe was trying to tell me two things: 1) I needed to use this early morning brain fog to my advantage and write this down before my mind had time to truly start thinking about the day, and 2) that I was hungry.

During my meditation it was clear to me that that was precisely what I needed to write about today: meditation.

Now you’re a progressive bunch here in California—I’m sure you know what meditation is, you know all about the benefits, you know about various practices, hell, you’re probably meditating while you read this, floating two feet in the air.

But for those of you who don’t know, here is the most basic rundown you’ll probably find on the web: the practice of meditation is the practice of actively making yourself thoughtlessly aware. Of course there is much more to it than that—there are various types of meditation, some with mantras, some with movements even—but the ultimate goal is the same: a state of thoughtlessness, of complete peace, and connection with the Life within and without you (which is really one and the same), while still being aware.

Of course this is probably easier said than done. According to research, the average person has about 60,000 thoughts per day—many of them largely the same as the one before (Did I leave the iron on? Did I forget to feed the dog? These pants make me feel fat. I wish I’d ironed these pants too. Did I leave the iron on…?) and quieting this constant chatter might seem nearly impossible at first. But over time and with regular practice, you will start to notice little “gaps” in between each thought. As you keep practicing, this little “gap” will get longer and longer. Of course then your brain might do this funny thing where it says, Hey, did you see that? That gap was huge! I’m so good at meditating! At which point, you’re back to thinking. But the important thing to remember here is this: thoughts are not bad. Don’t get mad at your thoughts, for that will just send you further into your own head. Just notice them; watch them pass by like leaves blowing in the wind.

When I was just starting out in meditation, laughter really helped me. When I found myself thinking, then getting mad at the thinking, then thinking about how I shouldn’t be getting mad at the thinking… Well, it really helped me just to notice how silly it all was and actually physically smile or laugh. When you take the pressure off of yourself, you’ll naturally invite the meditative state. And if not? Well—so what? So maybe you don’t go into meditation today. It’s not going to kill you. What’s more frustrating is sitting there for an hour trying to force your brain to stop working. When you realize you know what, maybe I don’t get into meditation today and that’s not the end of the world—when you detach from the outcome—well, that’s usually the moment you’ll start sinking into it.

Another thing that really helped me when I was just starting out was going to a group meditation. I started doing this years ago with a group in Austin. These people became like family to me—they even came to my college graduation—and though I don’t see them as often as I would like to now, each and every time I go back, it is as though we were never apart. If you’re interested in finding your own group in the Bay Area, I recommend you join Meetup.com and list meditation and/or spirituality as an interest. This is a great resource for meeting like-minded folks in your area and trying out various groups/meditation techniques to find the one that suits you.

What’s the point of meditating in a group? Well, like I said in my first post, it’s just the vibes, man. When you’re meditating in the same space, or even at the same time as others, there is a very real shift in energy. It makes it easier. That’s why I love what my homies, *Deepak (Chopra) and Oprah are doing starting March 11: hosting a world-wide 21-day meditation challenge for free! I’m doing it, *Deepak’s doing it, you should do it, and spread the word. I know I might be crossing over into hokie-town when I say this, but I truly believe that the more people who do this together the better! We can shift the energy of the planet if we work together; and it starts with you.

*I’ve listened to so many of their talks, I feel like we’re BFFs. I can totally call them by their first names—even if they don’t know mine.

So seriously, sign up today, and join me in 3 weeks of meditation starting March 11.