Health Department Under Fire Over Bedbugs 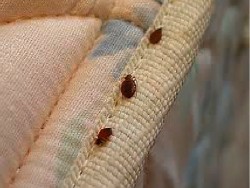 Bedbugs are not new to San Francisco, and anyone who works with SRO tenants in the Tenderloin will admit that it’s the bane of their existence. But a hearing at the Board of Supervisors’ City Operations & Neighborhood Services Committee Monday proved how inadequate San Francisco has been at dealing with them – with the Health Department being the primary designated agency responsible. A Bedbug Working Group of stakeholders was there to present recommendations after studying the issue for months, while Health Department representatives defended the protocols they have now. The verdict? The City is unduly reactive to complaints when it should be proactive and preemptive – and while some of the Health Department policies look good on paper, anecdotally we hear reports that inspectors are not putting them to practice. Supervisor Jane Kim is working on legislation based on the Working Group Recommendations, which could transform what has been one of the City’s most intractable problems in the past decade.

“In my 26 years doing code enforcement in San Francisco,” said Chief Housing Inspector Rosemary Bosque, “I have never seen a public safety hazard like bedbugs – especially in SRO hotels.” But because the Department of Public Health has primary jurisdiction on eradicating bedbugs, the Department of Building Inspection can only cite for bedbugs if other code violations are found. As a result, DBI increasingly refers complaints that are exclusively about bedbugs to the Health Department each year – with 293 cases in 2010.

Bedbugs are extremely difficult to treat, because it requires full cooperation by landlords and tenants alike – with both parties fully educated on how to address it. Three separate treatments every ten days are essential to eradicating, and treating one SRO unit for bedbugs is inadequate without treating adjacent rooms – or else the bedbugs will come back. In other words, preemption – not reaction – is the key, and should be the focus on City resources that enforce violations.

But that’s how the Health Department – which only has two Inspectors assigned to the City’s more than 500 SRO’s – appears to handle the problem. When asked by Supervisor Kim why such a low number of Inspectors, Environmental Health Director Rajiv Battia said it was an “adequate number,” based on the “service level we are providing.”

What is the service level they are providing? Responding to tenant complaints, most of whom have already gone to other agencies after waiting for months to treat the problem. In other words, the Health Department reacts to a problem – which everyone agrees needs to be treated proactively.

“We do proactive inspections in only a subset of SRO’s,” added Battia – most of which are master-leased hotels run by non-profits. In contrast, the Department of Building Inspection conducts regular room-by-room inspections – where the Health Department is invited to go jointly with DBI. But as Battia admitted, “it’s not our usual practice to co-ordinate” – only going in more intensive cases. As the Bedbug Workgroup wrote in their report, the Health Department rarely joins DBI in these room-by-room inspections.

The Bedbug Workgroup is a group of 14 tenant advocates, property managers and pest control operators, assembled by Supervisor Kim, who have met weekly since January to study the City’s effectiveness on bedbug enforcement. In their report (which can be viewed here), the Workgroup has suggested concrete proposals – such as (a) specific fines for landlords who do not even have a bedbug protocol to prevent or treat infestation, (b) enforcing codes – rather than make recommendations, (c) better co-ordination between agencies, (d) look at what New York has done as far as mandated training for property managers and (e) possible state legislative fixes on regulating pest control operators.

“We do not feel that two inspectors for 530 SRO’s can be called adequate,” said Jeff Buckley of the Tenderloin Housing Clinic – who chairs the Bedbug Workgroup.

Brad Bishop, who runs Sleep Tight Pest Control and serves on the Bedbug Workgroup, had some strong criticism – and solid ideas – for the Health Department’s practice. “I alone can come up with 400 units that have bedbugs,” he said, “and we’re a small company. I believe that we should ask all pest control companies that whenever they find a bedbug infestation, they should refer them to DPH. I’ve seen DPH do inspections without finding bedbugs, when our company went out and did find them.” Instead, DPH waits for tenants to complain — many of whom are struggling with the stigma of bedbugs, harassment by landlords and fears of retaliation.

But probably the most obvious recommendation coming from the Bedbug Workgroup is that the Health Department have a clearer threshold for actually citing a unit for bedbugs. Just like a Health Inspector is not required to see a live rat before issuing a Notice of Violation for rodent infestations, symptoms of a bedbug infestation should be sufficient to cite units for bedbugs. If we need to be proactive not reactive, it appears like an obvious solution.

In his presentation, Dr. Rajiv Battia claimed that it wasn’t necessary for Health Inspectors to find a live bedbug (apparently, corpses of dead ones are okay) – but ample public comment contradicted what happens in practice. “I went along with an inspector, who said she was not going to write up for bedbugs unless she saw a live one,” said Richard May – a Workgroup member who works at the Housing Rights Committee. It was consistent with what others testified at the hearing, with public comment from all over the City.

Probably the best testimony came from a former client of the Homeless Outreach Team (HOT, a Department of Public Health program that places homeless people in various private SRO’s.) He directed the crowd to his YouTube channel – where he videotaped the bedbug infestation in his room. Ironically, the room he documented had been approved by the Health Department for him to stay.

Following up on this week’s hearing, Supervisor Jane Kim plans to propose legislative changes to the Health and Housing Code. It won’t be the first time the City has tried to address the bedbug epidemic, but one thing has become clear – policy procedures have no teeth if they are merely advisory, and loopholes need to be closed to get real results. Otherwise, bedbugs will keep traveling from one room to another – to the frustration and consternation of all involved …