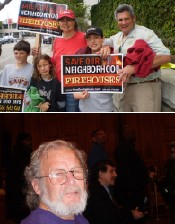 At 2:00 p.m. on Tuesday, June 16, I approached City Hall on my way to the Beilenson Budget cut hearings. At McAllister and Van Ness, a woman surrounded by three pre-teens waved a red sign. Her male companion exchanged triumphant hoots with passersby in cars. He was a firefighter. She was his wife. They withheld their names, stood proudly for a photo, then swooped up the kids. “We’re off to a Little League game.”

They had just left a roiling crowd of firefighters who, fresh from a Civic Center Rally attended by Mayors Gavin Newsom and Willie Brown, stormed the rotunda’s marble staircase to the Board Chamber doors. Shouts of “Let us in!” stunned SEIU and Health and Human Services organizers, standing quietly in line outside. President David Chiu asked Deputy Sheriffs to quell the noise. The disturbance that one observer described as “frightening” set a combative tone that poor people and advocates spent the afternoon defusing. But many speakers voiced respect for Police and Firefighters with, whom some work closely …

Activists and recipients alike petitioned Supervisors to reknit the badly torn safety net through an Interim Budget transfer to City Departments of $82 million in potential Mayoral budget gifts to Police and Fire salaries.

Ed Kinchley, SEIU 1021, San Francisco General emergency room social worker urged “a balanced approach to this budget. Every day, I deal with people who need a place to live, help with substance abuse, mental health issues … I see the suffering every day of people who don’t have enough services. I don’t think it’s okay to cut those services further. I implore you to share the pain, but also share respect for everybody doing valuable work for this City.”

The Health Department, Human Service Agency, Violence Prevention Services, and The Department of Children, Youth, and Families (DCYF) which serve San Francisco’s poorest, most vulnerable take the brunt of budget cuts (48%) while “Public Safety” workers — Police, and fire fighters along with top salary executives, and some Mayoral staff — get raises and no layoffs.

Said SEIU advocate Sarah Sherburn-Zimmer, “Public safety is more than just whether a fire truck will come out when something happens. It’s about whether people will have real services.”

Director of the Harm Reduction Therapy Center, Jeannie Little, spoke of responsiveness to addiction by her “treatment on demand” program as public safety. “Crisis prevention folks who never see a police car or SF General” conduct “dozens of 5150 evaluations every month,” stopping problems before they start.

Said Laura Guzman, Director of Mission Neighborhood Health Clinic, “The cut to Caduceus Outreach means we are cutting the only program to homeless adults with serious mental illness (who) never will access the Department of Public Health mental health programs. “

Homeless programs are hit hard with: (a) Closure of Shelters during daytime, and (b) Closure of the only Homeless Drop-In Center.

Tenderloin Self Help Center Program Manager, Elvis Bird, described many services lost, most importantly, the only Tenderloin public restroom. “If people don’t have a restroom (to use) they will do it on the street. I’ve seen it myself.”

Noted Laura Guzman, “We are cutting … the oldest drop-in center in the City that serves up to 350 people per day.” Large reductions in successful job-training and placement programs for formerly homeless people.

CLOSURE OF THE SRO COLLABORATIVES

Chris Strayhorn stated, “Period. Point blank. If poverty, homelessness, and mental health were a fire, this city would be in an inferno” … “Being a Julliard graduate that can’t get a job in San Francisco hurts. Rather than a GA check, Central City SRO (gave) me an opportunity to … be a part of my community. We’re … acrobats in this City. If you take our funding, it’s like our safety net.”

Said Laura Guzman, “We’re cutting SRO Collaboratives that are homeless prevention to the most vulnerable SRO tenants in the City. Those cuts are untenable.”

Luis Barahona, Jamestown Community Center activist with Mission Latino Youth and Families, observed, “All departments — DCYF and the Human Services Agency, have taken a 25% cut. The Police and Fire Department got 5 or 6% budget increases.”

“Last year there were seven murders in the Mission — young kids — one from our program.” We asked parents, ‘What do you want in response to these shootings?’ They said, ‘Extended hours,’ (Monday through Thursday ’til 8:00; Friday ’til 10:00), ‘and to give every kid a ride home in one of our vans.’ A 25% cut could end extended after-school Program hours.

“We’re not here to fight the Fire (or) Police Department. We would like to partner with them — figure how to share the pain.

“Many don’t live in the City. If their community leaders said, ‘We’ll cut your schools; all programs your children use; community services, but we’ll increase Fire and Police salaries,’ would they not be in the same place — trying to ensure that their kids and their families get services they need?”

“We are all in this together.”

The Interim Budget passed 7 to 3.