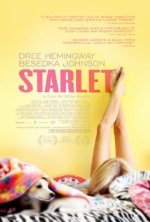 FIRST OFF – LETS START WITH THIS: “Starlet” is not what you might think – it’s a cute little doggie. That’s who the Star really is.

But, like magic – one of the girl’s wrangles herself in an old ladies house. She hangs around the poor old soul – who is barely holding on to her house. But Lo and behold – they seem to be attracted to each other like magnets. Except for this- the Girl takes money away from the sweet old women. If it were not for the super acting – I would have left the Theater.

Just keep in mind that the film is really for Adults only. There is much nudity as the men do everything possible to the girls during the filming. Everything shows – and everyone is bouncing around with everybody.

The ending of the film is rather strange. It involves the older woman. She wants to see her husband’s grave before leaving for Paris with the young girl. Something strange goes on between the Blonde girl and two gravesites. Now, I don’t know what that means, but it looks to me like the girl who is alive, may actually be the daughter of the deceased girl.

The movie does take off near the end – but bores in the beginning. The Actors are good –
They do a great job of looking and sounding good, but some moviegoers may avoid it – however – right now it is playing in San Francisco. You won’t be able to forget the Doggie (Starlet) – that’s the actor that should win an academy award.

THIS IS A NON-VIOLENT STORY ABOUT TWO BOYS AND THEIR FIRST CRUSH. What the wonder is that neither boy gets bullied or bashed. That’s unique!

It’s 1970’s and Pim, a fourteen-year old boy, lives with his mother on the Belgian coast. Pim falls in love with a seventeen-year-old. He is Gino. Both boys develop a sexual relationship. Most don’t last very long.

Gino’s mother tells Pim that Gino has found a girlfriend. Pim is crushed. Gino and the girl move to Dunkirk. There was much pain and angst in between time – but Gino still has deep feeling for Pim. And they do get back together.

Now Playing in San Francisco and other Landmark Theatres.

It’s the 1980’s. They are all young and they all want to learn all about acting. Rory, one of the College students is not sure of his sexual identity. He really is emotionally twisted. Then there is the over stated flamboyant (Zachary Isen) who is gay, is a Bitch, and drinks too much. This director of the play is way over the top. Zachary’s role in this twisted story is almost taken from the pages of La Gage Aux Follies. The performers are really quite good though – it’s the material that doesn’t stick to the frying pan.

The Good part is the tidbits of music throughout the play. The Actors even sing a little. The Group sing” Edelweiss” in the play, and they have great talents to show. It’s Gay and the story has a good backbone – but unfortunately the meat doesn’t stick to the ribs. I was looking forward to a story that would knock us out. But hold on. There are definitely remarkable moments in the show. I think that with some tinkering “Slugs and Kicks” would be a certifiable crowd-pleaser.

Altogether the show is tangled, but it does wave over the stage with an authentic atmosphere. Here are a few words to remember – Rory says: “I don’t touch my Penis!” O.K. – we’ll accept that. This is nice also: “I’m a person who likes your knee!” Now you can figure that out when you see the play at the Thick House on 18th Street and Arkansas.

Pal Joey the Stage Play is bright and charming in this revival. And it’s the feel good stage play right now. It’s humorous and Funny’ – and it sure as heck is laugh-out-loud charming.

At the beginning the play may have had some slow moments in the beginning, but the Rodgers and Hart Musical has become a world-wild entertainment that is still brilliant. It sure is great fun to hear the old songs again – especially with the talented cast now playing at the Eureka Theatre.

Here are a few of some of the wonderful songs from Pal Joey: “I Could Write a Book!’” – “Bewitched”. Love this little Ditty – “”Plant You Now, Dig You Later” and this cute one – “In Our Little Den of Iniquity”. There are plenty more to keep you interested in this perfect fall production.

Right from the beginning, you get the thrill of live theatre. This show is so cool to watch and absorb, and is lovingly constructed. The music continues to teem with authentic atmosphere. I became thoroughly enchanted.

The Actors are perfectly wonderful. Would love to sing along with the show – but, we can’t. It’s almost cinematic. They sure are ready for their Close-Up!

The Phenomenal actors are: Michelle Cabinian – Chloe Condon – Deborah Del Mastro – Ryan Drummond – Courtney Hatcher – Bryn Laux – Ashley Rae – Brendon North – Johny Grenberg – Tony Panighetti – Becky Saunders and Alex Shafer. So much is going on that you think that you are watching “A cast of thousands.”