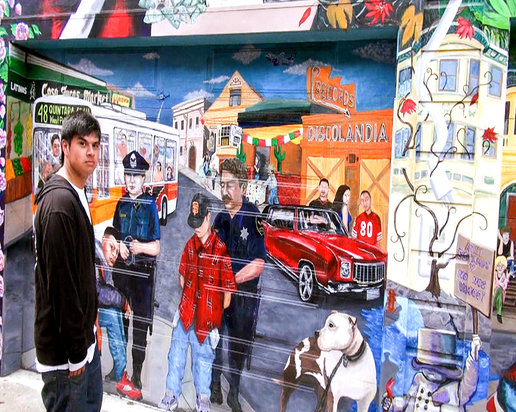 Alexandra Pelosi’s San Francisco 2.0 is on HBO on September 28, and the forty minute documentary is often entertaining. But in her zeal to prove that the “tech invasion” is destroying the city, Pelosi promotes outright falsehoods and ignores facts. Instead of offering a powerful message about San Francisco’s future, the film becomes its own self-parody, echoing the horror films that start the documentary.

Pelosi begins by highlighting San Francisco’s “tradition of noncomformity,” with the Beats, hippies, gay activists, and others all sharing a “spirit of anti-materialism.” The rest of the film accuses the “tech invasion” and “digital Gold Rush” of wrecking what Pelosi believes is the city’s anti-materialistic essence.

Her framing of the film tells us from the start that it will be driven by nostalgia, not reality.  It has been many decades since a “spirit of anti-materialism” governed San Francisco. And one could ask whether it ever dominated; the hippie era coincided with the SF Redevelopment Agency’s money-driven displacement of thousands of low-income South of Market residents, and the destruction of SROs and other affordable housing (as well as its ouster of African-American families from the Fillmore).

Pelosi grew up in the City and knows the very materialistic wave that swept San Francisco during the “Manhattanization” of the 1980’s. This was then followed by the even more materialistic mid-1990’s dot com boom. Yes, San Franciscans like to think of themselves as “anti-materialistic,” but the reality—as demonstrated by the pre-tech gentrification of many neighborhoods and longtime high rents and living costs—has long said otherwise.

But putting aside the zeal for real estate profits that preceded tech, there is no doubt  that San Francisco is, as Pelosi notes, “in the middle of a pretty drastic makeover.” And much of this makeover is for the worse. Pelosi’s claim that she “barely recognizes my hometown” is a stretch, but assessing San Francisco’s upscale transformation and the city’s response would make a great documentary.

That’s not the film we get. Instead, we hear from people bemoaning how tech has turned a once affordable and diverse city into a playground exclusively for the white rich. The film offers no evidence that current San Francisco elected officials see this as a problem.

The Truth About Mayor Lee and Public Housing

For example, Pelosi interviews an African-American woman in Hunters Point who claims the big tech companies are taking over her neighborhood. The woman points to a new building and says that the city is “taking all the projects down and moving rich white people in.” She says that the city is not making new housing “available for people like us to live in. They are throwing it in our face…Hey, you can’t stay here cuz you can’t afford it.”

That statement confirms Pelosi’s claims about the city’s complicity with tech’s nefarious agenda, but it simply isn’t true. Mayor Lee and San Francisco are not tearing down public housing projects and replacing low-income tenants with “rich white people.”  To the contrary, Lee has led the city to ultimately spend hundreds of millions in public funds to rebuild public housing for low-income tenants.

Pelosi included these inflammatory statements about transforming public housing into buildings for the rich without confirming their accuracy. The facts have been widely reported in the national media, which highlighted San Francisco’s effort to “rehab old housing projects and provide social services for residents in a city where property values are skyrocketing.”

But disclosing San Francisco’s leading role in preserving  low-income public housing  did not fit the film’s thesis. So the facts were replaced by misinformation.

Sadly, that fundamental dishonesty underlies San Francisco 2.0. Pelosi was so driven to portray today’s San Francisco as anti-poor that any facts contravening this thesis were omitted.

Similarly, Art Agnos, who has a larger role in the film than Mayor Lee, claims that “we aren’t building alternatives for people who want affordable housing.” That’s another false statement that Pelosi could easily rebutted but did not.

Pelosi continually allows people to define tech’s negative impacts without reference to facts, or as to whether the experiences they report are typical in the city.  One would never know from the film that evictions, displacement and rising rents were major problems in San Francisco years prior to tech’s 2012 arrival.

This selectivity of interview subjects and absence of facts results in an extraordinarily manipulative method of filmmaking. A different director could have interviewed a different set of people and gotten an entirely different response. That’s what separates a “documentary” from a political campaign film, which San Francisco 2.0 resembles.

A Narrow View of SF

The film also covers a very narrow part of San Francisco. Once again, we have a take on a “changing San Francisco” focused on Valencia Street and similar areas as emblematic of the city’s transformation into play space for tech workers. In 2014 I argued, “Putting aside the fact that Valencia became a hotbed for bars and restaurants prior to the 2011 tech boom, a very different portrait would result if the media sought to depict a changing San Francisco by measuring the transformation of Clement Street. Or Irving Street. Or Ocean Avenue.”

Pelosi ignores these latter areas. She instead follows the well-trod course of using the Mission District—along with Dogpatch, which has also undergone dramatic transformation—as the backdrop for her story. She promotes the story of Valencia Street’s $56 hamburger as if that were simply the going price for burgers in the tech-dominated Mission. (Pelosi lives in Tribeca, so knows hyper gentrification well).

The film’s geographic narrowness is matched by its demographic homonogenity. Chinese-Americans make up 33% of the San Francisco electorate and include the city’s mayor, two Assemblymembers, and three Supervisors Yet Pelosi interviews fewer Chinese-Americans than current and former editors of Salon.

Where is the Tenderloin?

There is no footage of the Tenderloin in San Francisco 2.0 even though Pelosi spent over two hours on multiple occasions filming me for this project and walking through the neighborhood. Nowhere in the film does she tell viewers that there is one San Francisco neighborhood—the Tenderloin—that is an exception to the city’s gentrification trend.

Pelosi told me she wholeheartedly agreed that Twitter’s move to Mid-Market did not gentrify the Tenderloin. This exculpation of tech wrongdoing apparently conflicted with her thesis, and the film omits any discussion of the Tenderloin entirely.

As I note in my book, The Tenderloin: Sex, Crime and Resistance in the Heart of San Francisco, the Tenderloin is often left out of books on the transformations of San Francisco because it doesn’t fit the story line of inevitable demolition, displacement and mass evictions. Pelosi told me that this was a story that needed to be told, but I guess she was not referring to her film.

Pelosi succeeds in showing tech folks as stereotypically arrogant, entitled, hipsters wannabees (depictions regularly seen on HBO’s Silicon Valley ). But if your understanding of San Francisco’s economy came only from this film, you would think that tech workers dominate the city instead of being roughly 7% of the workforce I kept waiting for Pelosi to make similar fun of other wealthy people —what I previously called “the missing war on lawyers and doctors”—but it never happened.

Ultimately, San Francisco 2.0 misses the big picture. It ignores that the rising real estate boom which her film implies is uniquely impacting San Francisco is actually having similar impacts on rents and evictions in Los Angeles, Portland, Seattle, Chicago and other cities across the nation. It also ignores the unprecedented efforts  San Francisco is taking to address the downside of the economic boom are entirely ignored.This ranges from spending millions to purchase small buildings whose tenants are facing eviction to the $1.3 billion affordable housing trust fund passed by voters in 2011.

The film describes the damage caused by the Ellis Act, but does not explain that the high point of Ellis evictions was years before the recent tech boom. While it’s great that she includes the Ellis Act crisis, since she has not previously explained that over 100,000 tenants are protected by rent and eviction controls the context of the Ellis Act is likely to be lost on most viewers. Nor does she note Mayor Lee’s huge increase in funding for Ellis eviction legal defense, or the city’s efforts to change state law to prevent such evictions.

We can all share San Francisco 2.0’s  sadness over rising housing costs that have made the city much less affordable. But it too often relies on a nostalgia for an affordable San Francisco that has been gone for decades.  Artists and writers were being displaced from the city well before the recent tech boom.

Art Agnos bemoans that he could not currently afford the Potrero Hill house he bought in 1972, a claim that most Bay Area homeowners who bought in the 1970’s could make well before tech’s arrival. While we look back at that era as the good old days, when  oldtimers during the Joe Alioto or George Moscone days were asked about 1970’s San Francisco they also felt that the city’s best days were in the past.

Randy Shaw is Editor of Beyond Chron. He is also Director of the Tenderloin Housing Clinic, San Francisco’s leading provider of permanent housing to homeless single adults and for legal representation to tenants facing Ellis Act evictions.