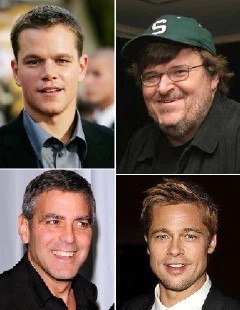 As I wrote after seeing the U.S. premiere, Michael Moore’s Capitalism, A Love Story, is a must-see movie and his most powerful and politically fulfilled work.
Moore thought so as well, and engaged in a media blitz to encourage a massive turnout to the 962 theater opening on the October 3-4 weekend. Moore argued that a top-grossing film critiquing capitalism would send a powerful message to Wall Street that the public is fed up with its greed. But this expected rush to theaters did not materialize. In fact, according to box office sources, Moore’s new film did less than half as well per theater than Sicko, his previous movie. Overall, Capitalism, A Love Story finished a disappointing sixth in its opening week, tied with Drew Barrymore’s roller derby film, Whip It. This past weekend, Moore’s film fell to ninth. There are many possible reasons for this. Did Moore overestimate the popular base for a movie that fundamentally critiques a system that most Americans support? Or has the popular anger that fueled attendance at Moore’s anti-Bush Administration films diminished with President Obama’s election, so that the public no longer sees attending a Moore film as politically and psychologically necessary?

Michael Moore’s new film opened in nearly 1000 theaters, the largest coverage in his history and more than double the venues that showed Sicko. But opening weekend revenue for Capitalism, A Love Story only slightly exceeded that generated by Sicko in only 441 theaters. And the film fell to ninth in its second week. Why did this powerful film that generated largely positive reviews not do better?

The Nature of Moore’s Audience

First, Moore’s primary audience is not teenagers eager to see the new date film on its opening weekend. Nor is it the under 12 crowd who packed theaters to see Cloudy With a Chance of Meatballs.

Moore’s core crowd — activists, progressives, union members — are not the type of folks who feel compelled to see a movie the first weekend it opens. I spoke to several progressive activists last week, and none had yet seen the film though all intended to do so.

So Moore may have simply misread his audience’s need to see his movie on opening weekend. He also overestimated his ability to get people to theaters by framing attendance as a political act.

Moore’s Systemic, Rather than Targeted, Challenge

While Moore aptly describes his new film as the fruition of his prior works, there is a difference between a film attacking a nonsensical war (Fahrenheit 911) or the nation’s health care system (Sicko) and one that directly attacks the capitalist system. Alex Vitale, a Brooklyn College sociologist, suggested to me that so many potential moviegoers are implicated in capitalism that they could feel less comfortable rushing out to see Moore’s new film.

In contrast, few attendees of Moore’s brilliant anti-Iraq war film felt they were part of the system that led to that nightmare, and in fact millions opposed the U.S. invasion from the start. Similarly, there is vast public anger at the nation’s health care system, and people could rush out to see Sicko without feeling implicated by the outrages Moore depicts.

Moore tries to avoid this problem by attacking Wall Street and the ruthless exploiters of capitalism, rather than small capitalist businesses or even the large but more socially conscious corporations that created good, middle-class auto industry jobs for Moore’s father and those of his generation. But Moore’s provocative use of the term “capitalism” in the film’s title may have left many who would agree with its message feeling less compelled to rush out and see the film.

The nature of Moore’s audience and the systemic challenge to capitalism aside, President Obama’s election is likely the biggest factor in the less than hoped for opening attendance. Few Democrats or independents feel the sense of hopelessness and rage that compelled them to spend a couple of hours watching Michael Moore tear President George W. Bush apart.

Moore did not have to hit the airwaves or the blogosphere to convince people that seeing Fahrenheit 911 or Sicko was a political act — folks were already desperate for ways to show opposition to the Bush Administration. But Capitalism, a Love Story is targeted not at the current President but at the more amorphous “Wall Street,” so the link between movie attendance and social change activism is less clear.

The fact is that public anger at Wall Street has been obvious for some time. People could understandably question why this point had to be reconfirmed by attending Moore’s film on opening weekend.

While Michael Moore’s efforts to dramatically increase his Sicko audience through a film critical of capitalism may fall short, his ambitions stand in sharp contrast to that of Hollywood’s many other “liberal” filmmakers and actors. While these folks regularly pat themselves on the backs for their donations to one cause or another, even the most progressive — such as George Clooney, Matt Damon, or Brad Pitt, each of whom can make whatever film they want — are fostering a culture where films are largely escapist fantasies that avoid truly telling it like it is.

Many Hollywood actors, producers and directors may define themselves as political progressives, but, unlike Michael Moore, they do not use their films to make a difference.

So get out and see Capitalism, A Love Story to send a message not just to Wall Street, but to the movie industry. Michael Moore should not be the only filmmaker with a progressive message that can open a movie in nearly 1000 theaters, but unless this film does well, he could be the last.