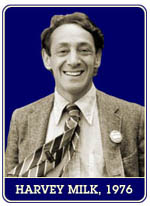 I wasn’t around when Harvey Milk was Supervisor, but he’s always on my mind when I go to City Hall. Whenever I walk through the metal detectors, I think about how Dan White snuck through a basement window of that building with his revolver to assassinate Milk and Mayor George Moscone. Whenever I climb the opulent staircase in the rotunda and look up at the ceiling, I’m reminded of the spirit that Harvey brought to this building – despite its radiance, City Hall is the “People’s House” where neighborhood folks and everyday people can still have their say. Today marks the 28th Anniversary of Harvey Milk’s death. Tonight at 6:30 p.m., long-time supporters and community activists will hold an annual candlelight vigil at Castro and Market to commemorate his legacy. There’s no better time than now to reflect on what that legacy is.

Harvey Milk had only one successful run (out of four tries) for public office, and only served as Supervisor for eleven months. As Supervisor, he only authored two pieces of legislation in his tenure – a non-discrimination law for gays and lesbians, and a “pooper-scooper” ordinance. But Harvey also believed that a true function of public officials is “not just to pass laws and approve appropriations — but to give hope.” Despite his brief political career, Harvey Milk’s message of hope has persevered for decades and inspired generations of progressive activists. It is why he deserves the respect and attention that he gets today.

It’s too simplistic to say that Harvey was the first openly gay elected official in America – and that this accomplishment gave hope to the “young boy in Altoona, Pennsylvania.” Harvey came to San Francisco in 1972, and in many ways, he was in the right place at the right time for someone of his charisma to emerge as a leader. With the Stonewall Riots of 1969 (and the Compton Cafeteria Riots of 1966), queer people were beginning to rise up and assert their identity proudly and openly. The Castro was the new gay mecca – and Harvey’s camera store on Castro Street became the hotbed of grass roots organizing for a growing and exciting community.

The queer community in San Francisco had existed long before Harvey came along. In 1961, Jose Sarria, furious at police harassment of gay bars, became the first gay man to run for Supervisor. For decades, gays and lesbians had been involved in city politics, as they supported and helped elect “gay-friendly” politicians. But Harvey was one of the first to insist that supporting our straight allies was not enough — “no matter how good our friends may be. A gay official,” he said, “is needed not just for our protection, but to set an example for younger gays that says that the system works.”

Although every LGBT political leader today uses the name Harvey Milk and quotes him when they run for public office, back in the Seventies he was not well liked among the City’s gay and lesbian elite. To them he was too confrontational, too dangerous, and too radical. In fact, Harvey helped found the San Francisco Gay Democratic Club (now called the Harvey Milk LGBT Democratic Club) because the city’s more mainstream political organizations wouldn’t endorse him.

One lesson that Harvey taught the queer community was that if you support other community struggles, those groups will come around to support you as well. As President of the Castro Valley Association (a coalition of gay-owned businesses), Harvey organized boycotts and pickets in support of many of the city’s largest unions. Much to the surprise of the city’s professional politicians, he later won the enthusiastic endorsement from the Teamsters and the Longshoremen’s Unions when he first ran for Supervisor.

It’s a lesson that the LGBT community has taken to heart in its recent struggles. For example, in 2005, Equality California was trying to get the state legislature to pass marriage equality. When the United Farm Workers announced a boycott of Gallo wine due to unfair labor practices, EQCA joined forces behind the boycott – even though this issue was not directly “relevant” to their agenda. One week later, the UFW endorsed marriage equality, which pushed enough Democrats in the legislature to come around and vote for it.

Harvey was also a staunch progressive on economic issues – his speeches outlined his plans to bridge the deepening divide between the haves and the have-nots that political “machines” across the country were creating. Before his death, he proposed a rent control ordinance for San Francisco to deal with skyrocketing rents and runaway gentrification. It’s an issue that the City still faces today – especially in the Castro – as fewer working-class people are able to come to San Francisco, and many more are being forced to leave. As the queer community grapples with mass displacement today, they should be reminded of where Harvey stood on this prevalent issue.

As Randy Shilts, author of The Mayor of Castro Street, wrote about Harvey: “Even if he did not move society the great length toward understanding and acceptance of homosexuality, he spent the last years of his life clinging tenaciously to the naïve notion that one person could change the world. Because he so dumbly believed he could change the world, Harvey Milk did.”

EDITOR’S NOTE: Paul Hogarth is an active member (and former officer) of the Harvey Milk LGBT Democratic Club. The opinions stated in this article are his own individual opinions. Send feedback to paul@thclinic.org