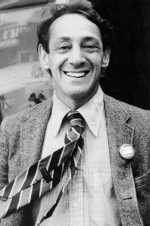 Imagine a sixth grader’s class presentation on Martin Luther King being nixed by a school principal because he feels that it’s part of “religion education” and since King was a Christian, parents need to sign permission slips for their kids to see it.

That might seem far-fetched, but it’s not much different than what happened in Ramona, California when sixth grader Natalie Jones prepared her Independent Research Project presentation on Harvey Milk, the out gay San Francisco supervisor who was murdered in 1978. His life is the subject of a movie starring Sean Penn in the title role. Jones was inspired by the film to do her presentation on the gay rights leader.

The day before she was to show the project to her fellow students, the school principal informed her that it was “sex education,” because it was about a gay man. Natalie’s mother was then told by School Superintendent Robert Graeff that kids in her daughter’s class would have to get permission slips signed by their parents in order to watch it.

Natalie’s mother, Bonnie Jones, was not happy with the decision. “This whole thing is unbelievable,” she told the North County Times. “First, my daughter got called into the principal’s office as if she were in some kind of trouble, and then they treated her presentation like it was something icky. Harvey Milk was an elected official in this state and an important person in history. To say my daughter’s presentation is ‘sex education’ because Harvey Milk happened to be gay is completely wrong.”

“They illegally censored student speech protected by the First Amendment and the California Education Code,” Blair-Loy explained. “Writing or talking about a gay historical figure who advocated for equal rights for LGBT Californians is in no way the same thing as talking about sex, and school officials should not pretend otherwise.”

The ACLU wants the school district to apologize to Natalie and give her a chance to make the presentation before all of the students in the independent research project, or they just might take the whole matter to court. So far, there’s been no apology, but the district and the ACLU are talking. Natalie eventually got to show her powerpoint presentation in the school lunchroom to students who had signed permission slips.

“This school completely overstepped its bounds in trying to silence Natalie Jones by shunting her presentation off to a lunch recess time and misusing a school policy to justify requiring parental permission to see it,” said the ACLU LGBT Project’s Elizabeth Gill.

By the way, Natalie received 49 out of 50 possible points for her report. School officials deserve a zero.

Tommi Avicolli Mecca is co-editor of Avanti Popolo: Italians Sailing Beyond Columbus, and editor of Smash the Church, Smash the State: The Early Years of Gay Liberation, which will be published in June by City Lights Books. His website: www.avicollimecca.com