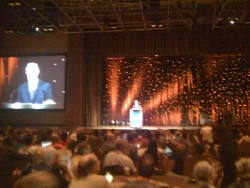 Netroots Nation concluded this weekend in Las Vegas – with appearances by House Speaker Nancy Pelosi and Senate Majority Leader Harry Reid, dozens of panels and workshops and a rousing Keynote by Senator Al Franken that renewed hope for liberal bloggers. If there’s one major frustration leading into November, it’s the U.S. Senate – where Republicans have obstructed practically everything that passed the House. Reid came to the Conference on July 24th – right after announcing we “don’t have the votes” for comprehensive climate change reform this year, only adding insult to injury. One panel on filibuster reform suggested we’re in a constitutional crisis, but Reid himself wouldn’t commit to any specific solution. But rather than give up, Al Franken reminded the netroots that Senators elected in 2006 and 2008 with their help are a “coalition of the impatient” – and represent a new generation of more progressive Democrats. Bloggers are needed this November to add to their ranks, in order to change the Senate.

“The Senate sucks and I mean that literally,” said Congressman Tom Perriello (D-Va.) at a panel on Saturday. “It sucks the energy out of everything progressives do.” For years, House Democrats have joked that House Republicans are the “opposition” but the Senate is the “enemy” – and it’s easy to understand why. Since January 2009, House Democrats (with practically no support from Republicans) have racked up an impressive list of accomplishments – only to see few of these become law because of the Senate.

Even the successes we’ve had (e.g., the federal stimulus, health care reform and Wall Street reform) were watered down in the Senate by right-wing extortionists like Ben Nelson, Susan Collins and Joe Lieberman – leaving a bitter taste in everyone’s mouth. This made pronouncements by Reid, Pelosi and President Obama (who sent a video message to the conference) about all that we’ve accomplished feel a little insulting. Voters are still angry like they were in 2006 and 2008, but now there’s a legitimate danger that they’ll blame Democrats who are “in power” – which is infuriating.

To her credit, House Speaker Nancy Pelosi acknowledged how much the Senate has been a problem – and it was apparent in her tone how upset she was. “We don’t know what can pass the Senate … ever,” she complained. “Think of all we can do without obstruction of Republicans in the Senate.” Referring to Harry Reid’s pronouncement that there aren’t enough votes before the November election to pass climate change reform, Pelosi said: “this is not something the Senate can walk away from. Time is running out.”

When Reid addressed the conference a few hours after Pelosi, a group of undocumented college students held a silent protest in front of the stage – dressed in caps and gowns, and calling on the Senate to pass the DREAM Act. Reid acknowledged the DREAM Act is a compromise of what’s really needed – comprehensive immigration reform – but said “I’m not going to do the DREAM Act if I don’t have 60 votes.” In fact, it was his refrain through the discussion on all issues – health care reform, climate change legislation, etc.

The Senate Rules require 60 votes to end a filibuster, and Reid complained that Senate Republicans have made “sixty the new 51” by simply announcing that they’ll filibuster everything. But these are effectively preemptive filibusters – killing legislation before any debate starts (let alone ends), and Reid replied that you “can’t make people talk” once it’s clear we don’t have sixty votes for cloture. But what he failed to address is that Democrats like Blanche Lincoln and Ben Nelson actively colluded to filibuster.

Reid doesn’t have the same excuse that Democrats in the California state legislature have – where the State Constitution clearly requires a two-thirds vote to pass the state budget. “The text of the U.S. Constitution says nothing about the filibuster,” said Mimi Marziani of the Brennan Center for Justice – at a panel discussion right after Harry Reid’s speech.

The Constitution allows each house of Congress set their Rules, and the Senate requires 60 votes to bring anything to a vote. “But just like laws Congress passes can be found unconstitutional,” said Marziani, “so can particular Senate Rules. Today’s filibuster does not promote debate – it merely blocks debate. That was not intended by the framers.”

In fact, Common Cause plans to file a lawsuit challenging the 60-vote requirement – on behalf of Senator Tom Harkin (D-Iowa) as a plaintiff. But no guarantee that succeeds. Ed. Note: Harkin’s office has informed me that he is not a plaintiff in the suit, although he supports filibuster reform and is aware of the legal approach.

When asked about filibuster reform, Reid said “I’ll drink to that” and held up a water bottle – but only said he’s “looking into” specific changes. Meanwhile, other Democrats in the Senate are pursuing concrete alternatives. Missouri’s Claire McCaskill wants to end “secret holds” – where Senators can anonymously say they intend to filibuster a bill. Michael Bennett of Colorado’s a proposal that would require Senators who filibuster to actually stay on the Senate floor and do so – or a lack of quorum kills the filibuster.

But changes to the Senate Rules can only pass by a two-thirds supermajority – unless they are introduced at the start of a new Congress. New Mexico Senator Tom Udall addressed the panel, and said he would propose a filibuster reform measure in January.

Of course, my obvious question was – why didn’t the Senate take up filibuster reform in January 2009? The Republicans had already planned to be total obstructionists, and in fact Democrats had complained about it in 2008 – when they were already shattering filibuster records.

“We were under the myth that we had a filibuster-proof Senate once we got 60 votes,” said Udall. “I remember asking about it, and was told not to worry about it because we’d have 60 votes once Al Franken got seated. Well, we found out what 60 votes got us.”

Newer Senators: The “Coalition of the Impatient”

Tom Udall is a freshman Senator, elected in 2008 when the netroots played a vital role in helping Democrats win and expand their majority. In fact, every Democratic Senator pushing filibuster reform is either of the Class of 2006 or 2008 – suggesting a sea change.

Senator Al Franken was the Keynote Speaker on the final night of the conference, and connected with bloggers more clearly than Pelosi or Reid did. “I’m not telling you to be patient,” he said. “That would be hypocritical. But now, Republicans want to undo everything we have done. No matter how frustrated you are, you can’t check out now.”

Franken hit on a point that made it obvious how the blogosphere cannot give up on the November elections. “We have a lot of Democratic votes in Congress,” he said, “but we don’t have enough progressive votes. And I’m not satisfied.” Effectively, the theme of the whole convention had been – we need more progressives, not necessarily more Democrats.

Since 2006, Democrats have netted 14 seats in the Senate – and the newer Senators are keenly aware that the netroots helped them get there. Unlike Harry Reid and other more senior Democrats, they are more willing to challenge the status quo and be combative against Republican obstruction. Sherrod Brown, Bernie Sanders, Jon Tester, Jim Webb, Sheldon Whitehouse, Jeff Merkley, Kay Hagan, Mark and Tom Udall, Claire McCaskill and Franken are the “Coalition of the Impatient,” he said, and they need reinforcements.

Democrats had been a minority in the Senate for so long, that people like Harry Reid just don’t know how to be in charge. That’s why it is so important to elect young blood to change the culture of the Senate, and Franken’s speech brought hope to the audience.

“I had decided to stop contributing money to political things,” said a blogger that night on Twitter. “Al Franken has changed my mind.”

Paul Hogarth took extensive tweets during various speeches at Netroots Nation, which you can follow at @paulhogarth.