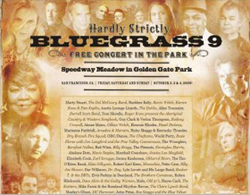 This weekend, one of the Bay Area’s best music festivals returns for a 9th time to Golden Gate Park, Warren Hellman’s “Hardly Strictly Bluegrass Festival”. Unlike the recent, high-priced Outside Lands concerts, this perennial favorite is free folks, as most outdoor events should be. “HSB” as it is now affectionately known, began in 2001 as just “Strictly Bluegrass” and since its initial conception, the festival has been sponsored and subsidized by San Francisco venture capitalist Hellman. The first festival originally featured only bluegrass musicians. By 2003 however, artists from other genres were invited and the “Hardly” was added to reflect the expanded scope. Lyle Lovett’s Large Band and John Prine will open the festival, and HSB regulars Emmylou Harris, Buddy Miller, Ralph Stanley, Mavis Staples, Ricky Skaggs as well as Hellman’s band, The Wronglers also return. Interestingly, actor Steve Martin and his Steep Canyon Rangers will also be on hand, as will Neko Case and MC Hammer.