Harding Feud May Be Resolved Soon 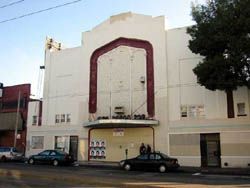 Although the Board of Supervisors has yet to hear a formal appeal of the planned demolition of the Harding Theater, it may be saved anyway. Yesterday, in a highly technical session, the board decided to continue the matter for the fourth time, though only for one week, to allow the Planning Commission to better prepare for the hearing. When asked if they were prepared to defend the negative declaration, which finds the property in compliance with CEQA, staff in charge said that they had not planned to defend it at the meeting, because they expected the compromise to come through and because the original plan did not take the history of the building into account. Peskin then suggested the hearing be continued for a week to allow Planning to prepare and said that if the negative declaration were to be rescinded, “We would deal with a cleaner record which would recognize the historicity of the project.”


Last month the hearing was continued at the request of both parties, to allow them to work out a compromise which would preserve the main theater space and allow nine housing units. Yesterday they opened with sniping. Arthur Levy, representing the CCP, said “The proposal is basically an alternative project … which ought to be reviewed at the Planning Department level.” James Reuben, attorney for the developers, said their proposal was acceptable to 90% of those concerned and said that “we are trying, and I think my clients are suffering, to act in good faith.” Reuben eventually agreed to go back to Planning for a new negative declaration, if they could guarantee a faster process. However, when the city attorney confirmed that rescinding the declaration would also rescind the conditional use permit, Reuben agreed to a one week continuance to allow time for more discussion with his clients.

This is not the first time that the appeal for the Harding has been continued (it has been on the board’s agenda since February) but it may be the last. CCP lawyer Arthur Levy took the continuance, and the planning staff’s reticence, as a sign that the Planning Department was unwilling to back its approval of the project, saying “That neg-dec is dead, gone.” He added that negotiations could not move forward until the developers included “restrictions on demolition” and “opportunity for community use” in their plans. Levy felt that if the theater was not formally protected for a set span of time it would still be in jeopardy and said that “you’d see condos there in five years.”