Guns, Parents and Sandy Hook: Time to Take The Bullet 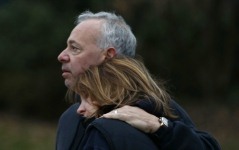 On Saturday afternoon, a grim state official, Connecticut Chief Medical Examiner Wayne Carver revealed to the world that the primary weapon used on the Sandy Hook school victims was not a handgun but rather a long gun, a Bushmaster .223 assault rifle, a formidable killing machine eschewed by most hunters, unwieldy for self-defense, similar to weapons used by our soldiers in Afghanistan and the weapon of choice of the Beltway snipers. The 26 victims inside the school, Carver announced, were dead from three to eleven wounds each.

All of the children killed, he said, were first-graders, although he cautioned reporters that the Connecticut State Police would have to confirm the age of the youngest victims. “I’ve been at this for a third of a century and my sensibilities may not be of the average man but this is probably the worst I have ever seen or the worst I know of any of my colleagues have ever seen,” Carver said. “The bullets,” he said, “are designed in a fashion that the energy is deposited in the tissue so the bullet stays in.”

It was all perfectly legal for Nancy Lanza, the first victim and the mother of the alleged shooter Adam Lanza, to have purchased and possessed the rifle, as it was legal for her to own the two handguns which also were found at the scene of the crime. Although Connecticut, like other states, has a regulatory gun scheme, and although it has a form of gun “control,” state law does not require permits or licenses to purchase or to carry rifles or shotguns. Nancy Lanza loved guns, her friends told the Times, and would talk about her collection at local bars.

The shootings at Sandy Hook Elementary are first of all a tragedy of families, of the parents and grandparents who now are enduring the darkest moments of grief; of the moms and dads who brought home from the shattered school their young sons and daughters, survivors before they even understand what the word means; of the brave teachers and school administrators who saved their students, some sacrificing their own lives to do so; and of the lifeless little bodies left behind in a place of learning, a place of imagination, an elementary school.

We know now that some of the adults in that school Friday took bullets for their students and that many others were prepared to do so. This is not a unique expression of bravery and courage in the line of fire. We saw the same thing 13 years ago at Columbine High School — the loving memory of Dave Sanders lingers on to this day. And is there a grieving parent today in Connecticut who would not in a heartbeat have traded places with his or her slain child? The possibility of that form of sacrifice is the essence of parenthood, isn’t it?

Whatever else it means, Friday’s tragedy is just another awful reminder of the disconnect that exists in America between the lengths to which we as parents (and teachers and school administrators) are always willing to sacrifice for our children when the bullets are flying and what we all are always unwilling to sacrifice for our children when the guns go silent. We rush to protect our kids from imminent death by gunfire but are content to allow thousands upon thousands of our children to die each year as a result of gun violence.

It would be foolish to contend that the massacre at Sandy Hook is a tipping point in America’s raging debate over guns. The near-murder of a congresswoman by a raving lunatic in 2011 didn’t move the needle. Neither does the fact that gun violence kills 10 times more Americans each year than died on September 11, 2001. As Elspeth Reeve wrote Friday at the Atlantic Wire, the National Rifle Association is gaining, not losing, ground even as we mark one mass shooting after another. Just ask George Zimmerman, the man who killed Trayvon Martin.

But it also would be foolish to dismiss the idea that the Sandy Hook shootings won’t change something. Our nation’s inability to protect our school children from gun violence is not just a basic failure of law and government. It’s a personal failure on the part of every adult — and especially every parent — in America. Nancy Lanza’s love of guns may have given her disturbed son an opportunity to use an arsenal of weaponry to slaughter a classroom of first-graders. But we all have enabled that love of firearms, have nurtured and protected it, at a terrible cost.

Just three days before the slaughter at Newtown, a noted federal judge, 7th U.S. Circuit Court of Appeals Judge Richard Posner, struck down Illinois’s concealed carry ban, the last in the nation. Citing recent United States Supreme Court precedent in the Heller and McDonald cases, Posner declared that the ever-broadening individual rights under the Second Amendment need not concern themselves with casualty counts. On Friday, out of respect for the dead, the flags at the United States Supreme Court were ordered flown at half-staff.

The most famous and powerful parent of them all, President Barack Obama, understood immediately what the Connecticut school shooting meant. Somehow more symbolically than the Aurora shooting or the Wisconsin shooting or the other Wisconsin shooting. Somehow more politically than the Tucson shooting or any of the other acts of gun violence which have unfolded upon this president’s watch. No one who watched his remarks Friday, watched him wipe away the tears, heard the choke in his voice, can plausibly contend otherwise.

The president teared up when he talked about the lives the young victims would never get to live. No doubt he reflected, too, upon the pain and anger he would feel if his own girls never came home from school one day. I suspect that every parent in America teared up Friday with the same thought. What if it had been my kid? What would that frantic drive to school be like? What words would the police officer use to tell me my child was dead? What would life be like on the day after I sent my child to school and had to pick up that child at the county morgue?

These are emotions, raw and powerful, and if the president can ever harness them, can ever direct the shock and outrage that tens of millions parents felt this weekend, then what Obama called “meaningful” gun reform wouldn’t just be possible — it would be inevitable. The NRA is a mighty thing. But as mighty as it is, it is no match for the political power of the “parent lobby” in this country. If we parents ever decided to take a stand between our children and the gun lobby, we would perhaps be shielding thousands of our kids from the deadly bullets yet to come.

This piece first appeared in theatlantic.com