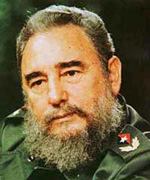 As the midterm election draws closer, the Bush administration and prominent members of his Republican Party are split over the treatment of illegally detained suspected terrorists. Recently, George Bush admitted to secret CIA prisons overseas while he ordered detainees transferred from those facilities to Guantanamo Bay, which has been at the center of heated debate over whether or not the prison facility should be closed with the administration declaring its opposition to the United Nations, and others. However, notwithstanding the scandal over the treatment of detained suspects, Guantanamo would undoubtedly serve as the kickoff for an “invasion” of the Republic of Cuba. Here’s the probable scenario.

Following the Spanish-American War. the US granted Cuba independence but retained permanent ‘ownership’ of the Guantanamo Bay naval base as well as becoming the major ‘investor’ in the island economy. Commonly referred to as Gitmo, the base can only be returned to Cuban control if both countries agree.

Prior to 1959, Fidel Castro had visited the United States to obtain funding for his revolution from those who had escaped the island nation during the dictatorship of Fulgencio Batista. It was Castro’s original intent to establish a democracy in Cuba, but official financial assistance from the US was nonexistent since the US government backed Batista, even though the late President Dwight Eisenhower imposed an arms embargo.

Guided by the influence of Ernesto ‘Che’ Guevara, Castro sold out the Revolution and sought financial assistance from the former USSR, and democracy was exchanged for financial backing and a promise of Communist rule for Cuba. Once Fidel Castro assumed leadership of Cuba, US economic domination of the island economy ended. From the 1940s through the early 60s, US corporations controlled or owned outright vast interests in banking, mining, sugar plantations, OIL PRODUCTION, and much more. Native Cubans also possessed considerable holdings, most notably in the form of ranches and farms.

Economic sanctions were imposed by the late President John F. Kennedy in October 1960 and continue to remain in place, with the United Nations still calling for the end to the decades-old embargo. Currently, medical supplies and food can be purchased from the US, but the Castro government must pay in advance. It’s estimated that the cost of the embargo, recently tightened by George Bush, costs Cuba nearly $2-billion a year.

On July 31, Fidel Castro ceded power to his younger brother, Raul, to undergo surgery for intestinal bleeding. Under Communist rule, the nation maintains strict media blackouts; additionally, Cuban citizens are reluctant to talk with outsiders for fear of being turned in by neighbors as suspected dissidents. The result of this policy has fostered an overabundance of speculation except for information freely offered by Fidel’s allies like Venezuela’s President, Hugo Chavez, also an ardent foe of the Bush administration.

Raul Castro ordered the military on a full alert in early August fearing a US invasion of the island. Anita Snow from Associated Press quoted the younger Castro declaring “We could not rule out the risk of somebody going crazy, or even crazier, within the U.S. government.”

Michael Langan of Agence France Presse quoted Cuba’s Council of State vice president Carlos Lage calling the US a “morally decadent empire” in a speech he delivered during last week’s Non-Aligned Movement (NAM) conference held in Havana. Fidel Castro was not well enough to attend last week’s NAM, which was founded in 1955 as the Third World alternative to aligning with major Cold War powers.

Lage was also quoted in his pointed attack on the Bush administration calling US policies fascist and that “The real story has been growing domination by one nation that unscrupulously applies economic and political pressure, and believes it has the right to invade any country to achieve its objectives, and which is leading the world we share to its own destruction.”

WHY GUANTANAMO FOR AN INVASION?

Even though the Bush administration has denounced speculation of a possible invasion of Cuba, recent covert acts and speeches point to a planned scenario. An additional $80-million in funding is being made available to “dissidents” INSIDE Cuba, while the administration plans to violate international law by increasing its Radio-TV Marti broadcasts using a privately-owned plane to fly closer to Cuban air space in an attempt to overcome blockage of the signals.

While Cuban MiGs could be ordered to shoot down the private flight if it appears that it has strayed into Cuban air space, Raul probably would not repeat the 1996 shootdown of the two Brothers to the Rescue Cessnas, an incident that is still being investigated by the US. Additionally, since the US has sufficient fighters that could accompany the Marti flights, and given that it appears Cuba not longer has a functional air force as a result of the breakup of the USSR that had heavily invested in Cuba, especially with weapons of war, this is a scenario that is unlikely to occur.

A repeat of the April 1961 failed Bay of Pigs invasion is also unlikely to occur. The Cuban immigrants in Florida who have opposed the Castro regime have grown old along with Fidel and Raul, and the younger generation of South Florida’s Cubans lacks the militant attitude of the older generation. Additionally, the Bush administration would be unable to justify such a scenario as a RESPONSE without a Cuban overt action.

A naval intervention, or alleged attack, is also unlikely since it appears Cuba doesn’t possess a naval force, unless you want to consider fishing boats as war weapons.

So why Guantanamo Bay?

Fidel has repeatedly threatened an attack on the base to force its closure. With the Bush administration funding dissidents within Cuba, a clandestine order could be issued that requires the dissidents, in order to keep receiving the funding, to fire near or at American troops at Gitmo. George Bush could then declare, using Fidel Castro’s own rhetoric, that the Castro regime has initiated an attack on the United States with an act of war. Given the fact that Cuba is on the State Department’s list of terrorist states (2002), Bush could also claim that a potential attack is an act committed by terrorists.

The Bush administration repeatedly demands that Cuba adopts democracy even half promising that the embargo could be lifted if the Castro regime allows the people of the nation to vote. I certainly will not argue that Communist rule is preferable for the island nation, but for Bush and his spokespeople to demand that Fidel and Raul Castro adopt US-style democracy has already been proven to be an unacceptable and interventionist policy that has miserably failed. And I certainly will not argue that under the present Cuban regime there are no human rights violations, because that would be blatantly false; human rights violations have been documented. But for George Bush to demand an end to Cuban violations demonstrates Bush’s hypocrisy given recent disclosures of US human rights violations.

But is democracy what George Bush really wants for Cuba?

The answer must be an undebatable NO. George Bush and his Republican Party favor corporations over the quality of life of individuals. If Cuba were to adopt a Bush-style democracy, free healthcare and free education for Cuba’s citizens would be abolished. The 6,000+ claims of Cuban exiles and US corporations for confiscated property would take decades to unravel, and US investors are drooling over the prospect of billions of dollars of profits possible in a Cuba that opens its economy to “market-driven forces.”

But the biggest enticement is the newly-discovered OIL that lies off the northern coast of Cuba. American oil companies are poised to pounce if the Castro brothers can be deposed.