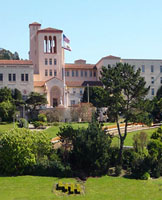 For 140 years Laguna Honda Hospital has taken care of San Franciscans in need of help. In its earliest days it was called the “Alms House”. Later it served as an infirmary for plaque victims and then shelter for survivors of the 1906 earthquake. Laguna Honda, as we know it today, was built at a time when dormitory style care was the norm and patient care pivoted around a bed where they ate, slept and received medical support in rooms filled with 39 others patients.

For decades the facility was out of compliance with State and Federal guidelines and therefore faced continuous threats by oversight agencies to suspend the reimbursements/payments to the City and County needed to run the facility.

Every Mayoral Administration since Dianne Feinstein had promised to study or formulate a plan but nothing happened until a Laguna Honda First Committee was formed by citizens and voters were asked to take a pledge not to support any future general obligation bonds until the disgraceful conditions affecting the poorest and frailest San Franciscans was enacted.

The Committee’s first target was a $60 million general obligation bond for the De Young Museums. “Old people before old art” was the battle cry and the bond was defeated. (The De Young was subsequently rebuilt by private contributions under the leadership of Dede Wilsey). The Laguna Honda First Committee announced that it would continue to defeat all general obligation bonds until Laguna Honda was brought into full compliance with all mandates.

Polling and an educational campaign began and Mayor Willie L. Brown, embraced the idea and organized meetings to create a proposal to present to the voters – not an easy task.

In 1999, voters overwhelmingly passed bonds that would in combination with anti-tobacco money save the crumbling, quake-damaged hospital. Then Supervisor Gavin Newsom was one of two member of the Board to oppose the bonds.

Since Mayor Newsom’s election two events have occurred at Laguna Honda, first an announcement that the funds approved in 1999 for 1200 replacement beds would cover roughly half that number, and secondly, the Mayor’s Health Director had decided it was cheaper to send certain types of patients from S.F. General up into the Laguna Honda population.

In no time these new patients were raising hell with the older population and violence was occurring on a regular basis against staff and elderly. Even a priest giving last rights was beaten up. The Laguna Honda advocates who had served and fought for the best interests of the patients and staff were now pitted against a public health administrator who defended has right to use the facility as he saw fit.

Angry citizens and advocates held meetings throughout the City and decided to draft an initiative ordinance that would stop such stupid medical decisions and Prop D was born to keep dangerous drug dealers and homeless psychos away from the elderly and terminally ill.

Dr. Katz as Public Health Director ginned-up a theory that under Prop D those with Alzheimer’s, Parkinson, and dementia would not be eligible to remain at Laguna Honda at a cost of $27 Million dollars to relocate these individuals – because under his interpretation these patients were potentially dangerous.

I know a bit about this issue since my Mother died of advanced Parkinson disease five years ago. She lived 27 years with Parkinson disease and my family chipped in to pay for acute care on a 24/7 basis. The enormous financial costs were the easiest to handle. The slow deterioration of my mother who lived with tubes that fed her and kept her alive unconscious with no quality of life was the tragic toll inflicted on the entire family.

It is an outrageous abuse of power and dangerous political ploy to phony up the medical debate on these horrific diseases and the great pain and suffering that goes with them. Shame on Dr. Katz for his disastrous admissions policies that created this mess, Shame on Mayor Newsom, the only voice from the Board of Supervisors against the Laguna Honda bonds, who now shows his callous indecency as author of the No on D ballot argument that legitimizes Katz’s demented medical theory. Shame on the Controller for not having the courage to stand up to this political outrage.

This gutter ball handling of the treatment of sick individuals who pose no risk to others will trigger an outcry from doctors, the medical community and advocates that will be heard from coast-to-coast. How could anyone who knows anything about these diseases believe anything from Dr Katz, Mayor Newsom or the current political establishment?