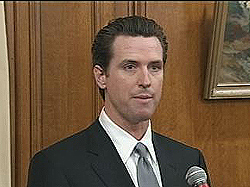 This is a story about image and spin, double standards for the rich and disparate treatment for the poor. It is also about whether, in regarding our public officials, we can truly separate the personal from the political.

In his October 26, 2006 State of the City address, San Francisco’s Mayor Gavin Newsom emphasized The City’s Quality of Life — the banal, in-your-face issues of pot holes, litter, poor sidewalk and park maintenance — and weightier concerns leading to the creation of “a new Focused Enforcement program to target and address …quality of life infractions.”

“This will be a pilot project.” he stated. “We’re going to start small. But the DA and I are optimistic that Focused Enforcement will make our city safer — and help those who need a little bit more encouragement to get off the streets and get the help they need.”

Oddly placed in the context of “a surge in violent crime,” the Mayor’s remarks highlighted nonviolent, victimless quality of life infractions like sleeping in parks, urinating on sidewalks, and public drunkeness. Newsom heavily implied the major perpetrators on whom he would focus the enforcement effort were homeless people.

On December 14, as part of his Third Annual State of Homelessness address, Mayor Newsom introduced his Community Court initiative after studying “Best Practices” designed by the New York-based Center for Court Innovation, whose members, he said, are traveling cross-country spreading their model to cities like San Jose.

The District Attorney’s office has directed San Francisco’s 12 established community courts since 1999, staffed by a panel of local residents who hear cases involving misdemeanor crimes (petty gambling, shoplifting, assault and battery). Each lay volunteer panel “makes clear to the offender the neighborhood impact of the crime, and determines a mix of community services, direct restitution and/ or fines.” This is intended to ease Court costs, lighten sentences, and encourage community involvement and responsibility.

Mayor Newsom’s “innovation,” seemed a new twist on the old Community Court idea, but once again targeted the homeless population in that it dealt with quality of life infractions attributed most often to the unhoused.

Calling our current system for dealing with quality of life “abjectly ineffective,” Newsom admitted “we are failing to deal with our chronic street population” and our “substance abuse challenges.” He saw the same people everyone saw every day, “the person that you have to step over on the street corner.”

But when he woke up in the morning and shaved, he looked in the mirror and said, “I have got to be responsible to deal with this. It is a great weight.”

In October and December 2006, when he uttered these words, he must have realized that he himself was an undeclared serial inebriate. Standing before his morning mirror or San Francisco citizens and leaders, did an anchor heavier than Mayoral responsibility terribly weigh him down?

In early February 2007, after admitting an affair with his former appointments secretary, Ruby Rippey-Tourk, wife of friend and aide, Alex Tourk, Newsom redirected SF media attention to his treatment for alcohol abuse.

The public confessions and apologies which followed were reminiscent of President Clinton and others whose consultants advised it politically smart to come clean and seek rehab. The humble mea culpas of a fallen leader invariably warm American voters’ hearts. Newsom then launched his re-election campaign.

Because Dr. Mimi Silber’s effective work with the homeless and substance abusers, Newsom or his handlers may have chosen his rehab to be done in connection with her Delancey Street Foundation. Or Newsom may have chosen Delancey because he has known Dr. Silber for years.

The nature of his “counseling” association is marked by pure class status privilege. He will not fulfill the live-in requirement as the homeless and drug addicts do. Nor will he partake of the work program in the restaurant or selling Christmas trees in the lot. His community service will consist of duties he already performs as Mayor. Hopefully, if he sits in group sessions, he will interact with homeless clients and come to understand their suffering.

In October 2003, just before Newsom’s Mayoral win, I contacted Jim Gabbert — the “legendary” KGO radio talk show host. He announced on air being approached to run for Mayor and learning that a Newsom political consultant reported cooking up Care Not Cash as a simple idea quickly grasped by voters — an easy sell without compassion for the homeless.

Yet David Miree, a Newsom Press Aide, insisted Newsom has done more to address homelessness than any San Francisco Mayor.

In his State of Homelessness speech, Newsom proudly announced “since we have started (our program), 4,795 human beings are no longer out on the sidewalks and streets.”

I asked Miree, What is the Mayor’s purpose in instituting community courts to deal with quality of life crimes blamed on homeless people? Don’t the words, “Crimes” and Courts” automatically criminalize them?

“We do not criminalize them,” he said. “(Our goal is) to get them off the streets (and) into whatever type of program they need, enhance their quality of life, getting them off drugs or (addressing) the precipitating factor as the reason why they are homeless. We try to look at those things, identify them, and assist in helping them find a healthy alternative.”

Then why put the “Focused Enforcement” it in terms of crimes and courts?”

Miree said, “Whether or not you are homeless or a business person, if you are participating in behavior not healthy to yourself, the community, or the environment,” like public urination, littering, or drinking, a public official’s main concern is to “make enforcements” to help lessen those types of infractions, whether or not they are from homeless people, business people, visitors, or what have you (and) provide a safe and healthy environment for all residents.

I observed that I live in Pacific Heights and walk all over the City. Public drunkeness is everywhere. Neither Haight street kids nor Marina techies are ticketed. Is this a double standard?

Miree stated, “Those quality of life citations would apply across the board to everyone,” who showed a repeated pattern of “serial inebriation.”

The Mayor’s word was “serial inebriates” meaning over and over again. “Correct?” I asked.

I stated the Press reported that Mayor Newsom himself was observed publicly drunk on several different occasions, at least one while he was officiating with Mayoral duties.

And when the Mayor made this homelessness address, he had not declared his alcoholism. You say it applies to everyone who is publicly inebriated. Is this not a double standard?.I asked.

“Let me say clearly for the record,” stated Miree, “I am by no means commenting on a very personal matter for the Mayor, not (having) a direct, (or) indirect, effect on public safety or public health..

This is both personal and a matter of public policy, I urged. Doesn’t the Mayor make policy decisions directly and indirectly affecting the public safety and health of everyone in the City? Is it not essential that his mind be clear?

“Current community justice practices share a common defect: they rely on groups of volunteers that are often not representative of the community and that are prone to being dominated by a vocal and active minority.”

In some regions, a small number of activists participate beside business district leaders who dislike homeless people taking up their sidewalk space. These self-selected, biased groups represent a mere sliver of the community.

In fact, the entire culture shares a collective bias against homeless people generated by the disappearing middle class fear that “I might be next.” The only non-biased community court participant would be another homeless person.

However, the most serious concern is that such courts punish people for the social status in which they find themselves — always against their will — because there is insufficient available affordable housing.

Active Crimes — the crime of stealing is an action which unlawfully deprives another of their property.

Classist Status Crimes — Quality of Life Crimes are classist status penalties. They punish a person, not for negative actions, but for their social class or status dictated by low income and no housing. Levying penalties upon them does not “cure” their situation. In fact, it is a double abuse — — first for being poor; second for trying to survive poverty.

Almost all quality of life “crimes” are acts of survival.

A mother may attempt to shelter her child from rain in an abandoned building or under a bridge.

The Veteran with PTSD may try to anesthetize himself so he can sleep on cold cement.

An old man with untreated prostate cancer might have to to relieve his full bladder.

The disabled woman might have to rest sore legs or back.

The starving dirty one may beg drivers for food money on medians or rights of way?

How is it fair or legal to fine an unhoused citizen whose only “crime” is to sit, to eat, to sleep, to stay warm or dry, or make a few dollars to buy essentials? These are all activities taken for granted by people who can perform these functions at home

Even the “public drunkeness” of “serial inebriates,” as the Mayor well knows, can be caused by the sufferer’s use of alcohol or drugs which may be the only anesthetic available to deaden stress and pain — the pain of loneliness, isolation, or fear, or physical discomfort —or the savage pain of homelessness.

In the meantime, the Mayor and Ruby Rippey-Tourke have moved on. She hosts a Sunday morning KQKE radio show. He remains clearly aware of the interests of his base and the fickle nature of San Francisco politics.

On Thursday, February 25, 2007, the day before the venerable, but chic, and sassy Gayvn awards, Mayor Newsom and Assemblyman Mark Leno officiated at a ceremony honoring a studio producing pornography for gay males.