Guest Editorial: San Franciscans Should Be Told Truth About Violence 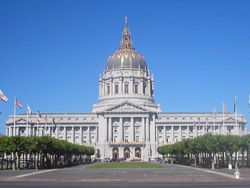 When are we going to tell the people of San Francisco neighborhoods the real truth – that City Hall has no answers to the run away crime in San Francisco. I wrote two months ago about the fear we are experiencing in our various neighborhoods, only to have a spin from City Hall that crime was down and cameras posted on light polls will do the job of lowering the crime rate in our various impoverished neighborhoods. Well good citizens – the crime rate is spreading throughout the city – from burglaries in the Sunset, to murder in Golden Gate Park – to murders all over the city. We are running ahead of last year at this time with over 86 murders in our beautiful city. Don’t you feel it is time we are told the truth – that CITY HALL IS CLUELESS IN DEALING WITH THIS PROBLEM.

Do they have any answers to combat this wave of crime – particularly murders? No.

I forgot to mention – they did come up with the idea of cameras on light polls. Brilliant.In their time of crisis, I don’t want to be seen as bashing City Hall, since I don’t want to dwarf their creativity on this issue.

Move over Camden, New Jersey – the murder capital of the country – San Francisco is on its way up to fight you for that position.

If the only thing you can do a this point is put cameras up on light poles, why not on light poles in all of our neighborhoods for crime prevention.

Yet, what we are getting from City Hall is – spin, spin, spin, or polls on how popular certain people are doing at City Hall. Who cares? What we want as neighborhoods citizens is a safe city. A city that we can walk out into the street without fear of bodily harm. Not the political spin, that the only people being killed are targeted gang members in our poorer neighborhoods.

Is this spin meant to say – don’t worry about crime as long as you are not a gang member or live in an impoverished neighborhood? HOGWASH!

As a citizen of San Francisco, I want answers and results. Not political spin off and rhetoric from City Hall.

Until citizens of San Francisco are willing to demand from its elected leaders more then simple gestures, make sure you bring your flack jackets. By the way, one of the individuals killed below market was wearing a flack jacket – but unfortunately it did not work.