Guest Editorial: Republican Culture of Corruption and Neoliberalism in The City 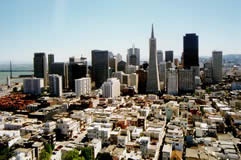 Several years ago while I had a few hours of ‘free’ time, I perused a few forums at Craigslist and stopped at one entry in particular. It was a question from an East Coast transplant who queried: Why doesn’t San Francisco have a decent daily newspaper like the New York Times? Talking aloud to myself, I responded: because the two large dailies are focused on supporting their Republican advertisers and the right-wing donor-base. The California Hearsts (the Chronicle) are huge Republican supporters and with few exceptions impose a right-wing slant to the paper’s stories; and with few exceptions, The Examiner is just as bad, if not worse, only you don’t have to pay to read it.

For example, take the Examiner’s opinion pages. First, most of the published letters express a right-wing viewpoint, like those from E. F. Sullivan, who should be getting paid for the amount of crap he submits from bashing non-fare-paying MUNI riders to trashing progressive concepts, most particularly those submitted by the Honorable Chris Daly. (To those few progressives who are able to get published, no offense.)

Then there are the letters accepted from the San Francisco Republican Party, like the March 10 garbage spewed by Howard Epstein, Vice Chair of Communications, whose antisocial attitudes invoke nausea followed by rage. Epstein’s plan for The City’s $137-million budget surplus is to spend the money on “one-time infrastructure repairs that benefit average taxpaying citizens….” Using the typical Republican “politics of fear,” he espouses that “many of the suggested spending increases will increase the cost of government permanently” in a vain attempt at scaring property owners that said owners should speak out against spending the funding on “housing projects that benefit relatively few San Franciscans.” It’s the typical degenerate ‘profits over people’ argument that fuels activists such as myself to pen editorials like this.

Then there’s the un-American rhetoric that puts a smelly brown stain on the opinion page from who I assume is Phil Bronstein’s counterpart at the Examiner, James Pimentel. The editorial — “Initiative process misused in city” — attempts to invoke an outright denial of democracy and is one of the most putrid examples of right-wing extremism.

The editorial — another bashing of the Honorable Chris Daly — claims that supervisors don’t have a right to submit initiatives to voters, in particular after proposed legislation (the early disclosure of evictions to potential buyers of TICs, which Pimentel whitewashes as “housing property”) has been vetoed by a Republican-Lite Neoliberalist Mayor, Gavin Newsom, whose history of anti-tenant votes is a matter of record. Pimentel asserts that initiatives “should be primarily the domain of real grass-roots public support” but fails to remind readers that the Examiner supported right-wing measures last November that could hardly have been called grass-roots initiatives and that attempted to deny democracy to millions of Californians. Contrary to his own claim, Pimentel also attempts to marginalize the TRUE grass-roots voters of The City, the two-thirds of the population who rent.

But where was the Examiner editorial decrying the fraud and attempted extortion committed by Matt Franklin (Director of the Mayor’s Office of Housing), Marshall Foster (City Policy Planner/Green Planning), and Larry Badiner (Planning Department), and introduced by Sup. Michela Alioto-Pier as authentic correspondence from Planning Director Dean Macris regarding the C-3 parking legislation? Nonexistent. And why? Because such an editorial would have been counter to the American “values” supported and espoused by the paper’s Republican advertisers. You know, the “values” that fraud, extortion, lies, and profits before people are the ‘true’ American way of life.

To that East Coast transplant who I hope still lives here, I repeat your question: Why doesn’t San Francisco have a decent daily newspaper? Does this editorial answer your question?