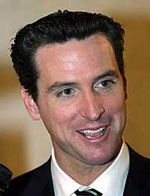 Mayor Newsom just doesn’t know when to shut his big mouth. He’d rather dig himself into that deeper pit which I term his Republican-style politics because he apparently feels so insecure, he will spew out any kind of propaganda and lies to make himself appear as if he knows what it means to be a leader. What a pathetic excuse he is as an elected official.

His most recent attack on the honor and integrity of Sup. Chris Daly makes Newsom sound like George Bush declaring that to leave Iraq now would be bad for the U.S. Bad for some, yes — the top 1% of the population who control most of the wealth, bad for sleazy businesses like Halliburton and Bechtel (one of the Filthy 52).

I’m talking about the mayor’s August 19 letter to the Board of Supervisors in which Newsom stated “our efforts to move away from back-room [sic] dealing as the basis of land use policies at Rincon Hill was marred by the worst type of strong-armed ‘alderman-style’ tactics.”

Well, let’s get a few facts cleared up right now.

Tell us, God Newsom, who was it who met with the wealthy developers at the Marriott on July 16, a meeting that completely EXCLUDED South of Market residents and SOMA community organizers? Was that you, Newsom? Talk about sleazy backroom deals, that has to be at the top of the list for the millennium.

San Franciscans partially know the result of that secret brotherhood; you attempted to give a huge tax break to the developers at a time when this city is starving for cash. And if you had succeeded in yet another giveaway to your wealthy supporters, you would have mirrored this year’s attempted budget slashing of social justice programs for the 2006-07 budget.

As to affordable housing, it is Sup. Daly who showed true leadership on the Rincon Hill exchange, not you, Newsom; you attempted to open the cash register then turn your back and let the wealthy developers take much-needed money from the city with your blessings and approval. And to add the rotten cherry to the top of the sour dessert you’re trying to feed the good people of this city, your 15-5 is all about CONDOS, and when you use the word “affordable” The Almighty should make your tongue burn; yeah, affordable, to those making $95,000 a year!

Now I want to set the record straight at this time. It’s not that I don’t trust or like Newsom just because of Rincon Hill, or the way he tried to screw us Trinity Plaza tenants. It’s because I know Newsom’s history; that’s why I have never voted for him, I have never liked him, and I have never trusted him — and for as long as I live I will ALWAYS feel that way about Newsom. Newsom has always voted AGAINST TENANTS in a city that is comprised of 65% tenants. And Newsom has consistently shown favors to the city’s wealthy elitists.

That’s why I can’t stand Newsom — he is NOT a politician representing the people; he’s a politician’s politician, paid for by the multimillionaires and billionaires whose interests he represents.

But let me digress a bit here — it’s a very short story, but it’s something I’ve wanted to write since last year, and now is the appropriate time. In other words, I’ve been busting my gut holding off on this.

It’s another Beyond Chron exclusive.

The San Francisco Chronicle’s Golden God Newsom was deliberately frozen out of the negotiations over the rebuild of Trinity Plaza, and I’m the one who wrote that unwritten law. When we started negotiations I simply stated to other Trinity Plaza Tenants Association members, SOMCAN, and our friend Chris Daly that Newsom was not going to know what was happening and likewise the Chronicle was off limits for any comments. I could do this because I chair the TPTA media committee and it’s my responsibility to approve or disapprove of media contacts and content. I also studied broadcast journalism in college and understand media relations.

How’s that grab you, Newsom!

Oh, one more short story, another exclusive. In another one of Newsom’s secretive backroom meetings last year in preparation for Prop A, the affordable housing bond measure that he caused to fail, God Newsom blew a gasket as he heatedly told the few in attendance that he wanted the Trinity Plaza Tenants Association members to shut up. Newsom forgot one critical fact: even the walls have ears. Awwww, Newsom, did you really think we didn’t know?

Now that’s Newsom Republican-style politics — to silence the opposition, and if you have media [Chronicle (another one of the Filthy 52), Examiner, and the like] willing to spew only your propaganda, it almost creates a fascist-like state. I wonder when George Bush will admiringly invite Newsom to the White House for an intimate dinner?

Okay, back on track, but I’ll keep going in reverse for as long as you can tolerate it.

Newsom’s keynote speech on May 17 to other right-wing extremists, namely SFSOS, which, in case you don’t recall, stands for San Francisco Save Our Streets — the biggest misnomer in the history of our city. Even though this group consists of Newsom’s pals and buddies, and even though Newsom gave the keynote address, this “meeting” is a prime exhibit of the type of secret societies Newsom covets. I can only imagine that somebody from the Chronicle attended but didn’t write a story; or maybe another self-imagined journalist attended, but no story emerged.

A few of SFSOS’s offshoots are the Committee on Jobs, which has absolutely nothing to do with the creation of jobs, and Plan C, which I refer to as Plan 9 from Outer Space because the group consists of poor excuses for human beings.

Where am I leading to on this, you ask?

It’s all conjecture, but I just keep wondering what kind of role Newsom might have played during last year’s elections when Sup. Sandoval and Sup. McGoldrick were subjected to the hate-mongering attacks by SFSOS and it’s offshoots. You know, from people like:

* The Gap’s Donald Fisher and all the other inconsequential Fishers

* Diane Wilsey of UCSF with Doris Fisher and who gave $20k to CA Sec. of State Bruce McPherson (Schwarzenegger’s Republican appointee when Kevin Shelley was forced to resign because of the scandal of Newsom’s close friend Julie Lee)

You know, the cream of the crop. More like the curdled, spoiled milk of San Francisco.

Do you think any of these people, including Newsom, kept notes of meetings to plan the strategy of the attacks on Sandoval and McGoldrick?

Do my ears deceive me, or are those paper shredders I hear?

Somebody, somewhere and at some time in the near future is going to talk, Newsom. When you engage in secret societies and sleazy backroom meetings with the intent to shaft working-class people, our city’s seniors, the disabled, people of color, low-income residents, you can’t hide the truth forever. Somebody is going to talk.

It will Newsom himself because he just doesn’t know when to shut his big mouth.