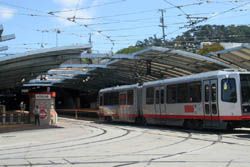 (The following opinion piece was submitted to the SF Examiner in response to an article on Muni. The Examiner did not print my piece. -MN)

The recent [July 25] Examiner article on Supervisor Tom Ammiano’s proposed Muni charter amendment cries out for some historical background. Andrew Sullivan’s claim that “Prop E is working” when Muni riders are facing yet another fare increase on September 1, along with fewer buses on nearly every line, is preposterous. It’s time to fight back, not to accept the status quo.

The Prop E story actually begins in 1994, when a large and broad-based coalition, led by then-supervisor Sue Bierman, shook up the downtown kingpins by putting Prop O on the ballot. Prop O would have begun the process of setting up a downtown transit assessment district, and would have required downtown commercial property owners and landlords to pay for the huge subsidy they get from Muni delivering thousands of workers and shoppers to their doors every day of the week.

Try imagining what those downtown office buildings would be worth without Muni. The whole structure of downtown is based on Muni shoveling people through their doors. The 38-Geary alone is one of the largest transportation lines in the world. Take away Muni, and those skyscrapers are just big, empty monuments of concrete and glass.

Unfortunately, Prop O was defeated after a $750,000 disinformation campaign, organized and funded by the Shorenstein Company, then the numero uno downtown landlord, along with the Building Owners and Managers Association (BOMA). It’s not hard to see why the downtown crowd fought Prop O so hard. City officials have estimated that the Muni subsidy to downtown is worth over $50 million per year. That’s around $500 million the downtown landlords have saved in the last ten years — and city taxpayers have had to fork over.

Despite Prop O’s defeat, the downtown boys saw that they had to prevent future initiatives of this sort. Immediately after the campaign, the Chamber of Commerce floated a proposal to take control of Muni away from the supervisors — and away from any direct influence by city voters — and put it in the hands of “professional” appointees. This was the first version of what eventually became Prop E. But nobody was going to line up behind the Chamber to carry out this power grab. So, after a while, the lead was passed to the San Francisco Planning and Urban Research Association (SPUR), a notoriously pro-downtown “think tank.” SPUR organized a series of “stakeholder” conferences but still couldn’t get any traction for the Chamber plan.

Eventually, the lead was passed once again to something called “Rescue Muni.” Rescue Muni was billed as a Muni riders’ organization, but was in reality almost wholly a media creation of the then-Hearst-controlled SF Examiner. But even the fig leaf of this so-called Muni riders organization couldn’t move the Chamber’s plan. In the end, it was the infamous Muni meltdown of 1999 that allowed Rescue Muni and their corporate backers to ride to the rescue and sell city voters that bill of goods called Prop E. The deal was brokered by Rescue Muni’s chief political supporter, Supervisor Gavin Newsom.

Under Prop E, the supervisors have no control over Muni and its budget. The appointed Municipal Transportation Agency (MTA) runs the show, not the city’s elected representatives. That is why the current plan to raise fares, cut service and lay off drivers — forcing us to pay more to wait longer — couldn’t be stopped by the supervisors. In order to reject the fare increase, for example, two-thirds of the supervisors would have had to reject Muni’s budget in its entirety. Before Prop E, a simple majority of the supervisors could have stopped the fare hike.

So much for democracy. Hundreds of thousands of people ride Muni everyday, but we have no real way to influence the policies and governance of this vital “public” transportation system. This in a city where even the Assessor and the Treasurer are elected officials.

Today, Rescue Muni, our alleged savior, is little more than an email list controlled by Newsom’s failed District 5 supervisorial candidate Andrew Sullivan. Where was Rescue Muni during the fight to stop the fare hike and service cuts this year?

Ammiano’s proposed charter amendment is a small step in the right direction, giving the supervisors the right to appoint some of the MTA board members. But it is certainly not a solution to the lack of democracy inherent in the Prop E arrangement.

But there is another road to democracy. We can vote with our feet. A number of rank-and-file Muni riders are fighting back against the fare hike and service cuts by calling for a fare strike, starting September 1, when the fare is scheduled to go up. In a fare strike, passengers ride the bus, but do not pay the fare. The object is to keep the system running, but make the fare hikes and service cuts a losing proposition for the MTA. Fare strikes have been successful in recent years in both Los Angeles and Chicago. Information and leaflets about the upcoming fare strike can be found on the Coalition for Transit Justice website (www.transitjustice.org), on the Social Strike website (www.socialstrike.net), and on my website (www.marcnorton.us).

In 1955, Rosa Parks made history by refusing to sit in the back of the bus. Today, San Francisco Muni riders are making history by demanding the right to stay on the bus. If not now, when?

Marc Norton is a bellman at a small hotel in downtown San Francisco, and a founding member of San Franciscans for Tax Justice.