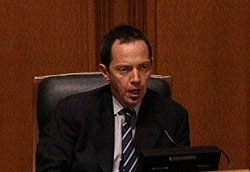 During the run-up to the 2006 election campaign for San Francisco District 8 supervisor, many claims have been made about the voting record of incumbent Bevan Dufty. Critics claim that Dufty is far too conservative to represent the progressive voters of District 8. Supporters claim that although Dufty’s record is conservative, he’s become increasingly progressive during his four-year term. As a concerned District 8 resident, rather than succumb to the rhetoric I decided to analyze Dufty’s voting record on the Board of Supervisors. District 8 voters may be surprised by the findings.

The Progressive Voter Index (PVI) is a measure of San Francisco voter politics developed by SF State professor Rich DeLeon and analyst David Latterman. Their analysis showed District 8 to be the third most progressive district on the PVI out of the 11 districts. Four districts measure high on the PVI scale: D9, D5, D8, and D6. Bevan Dufty is representing one of the most progressive Districts in San Francisco.

In fact, Dufty’s votes were in line with then-supervisor Gavin Newsom, who represented one of the three conservative districts while serving on the Board. That voting trend continues today with Newsom as mayor. Dufty has reliably voted to sustain all five of Mayor Newsom’s vetoes, along with the three supervisors who represent the most conservative districts on the PVI scale: D4, D7, and D2.

Dufty himself stated that his record lies between the moderates and conservatives on the Board of Supervisors. Statistical analysis illustrates his claim graphically. Combining District 8’s high score on the PVI and Dufty’s conservative voting record, the man begins to look like a political extremist. Compared to the supervisors, Dufty is way out of line from the politics of the district he represents.

Dufty is a nice guy and strives to earn trust within District 8. However, looking at Dufty’s Board of Supervisors voting record, it’s clear he does not fairly represent the interests of District 8 voters.

His prompt response on district problems that are raised by narrow interests comes with an unwavering obedience to city hall. Dufty’s alignment with supervisors from conservative districts has resulted in policy that goes against the interests of D8 voters.

What San Francisco needs right now is better leadership. Take for example environmental issues. Cities such as Portland, Chicago, Austin, Seattle, and New York are moving leaps and bounds ahead of San Francisco. We do have a few highly successful environmental projects that have earned San Francisco international recognition. However, San Francisco is largely resting on its laurels.

Mayor Newsom recently spoke in New York about how cities are forging the way on environment issues. “There are so many things we can do today. We don’t need to wait for tomorrow,” he said. “It is not that complicated. It’s a question of political will.”

During the same trip, Newsom noted how Central Park in New York is relatively free of homeless people compared with Golden Gate Park here in San Francisco. That resulted in a new effort to chase people out of the bushes. However, he failed to comment on how wonderful Central Park is with automobile traffic now severely limited. Making San Francisco more livable will require a different type of political will.

The Board of Supervisors is a place where we need clear leadership on progressive issues, such as the environment, energy policy, local economy, and fair labor. At times, San Francisco has been a leader for California and for the rest of the nation. To make stronger inroads over the next four years we’ll need supervisors with more political will than Dufty has shown during his first term.

San Francisco is notorious for re-electing incumbent supervisors. What will it take to defeat Dufty in the D8 supervisor election this November?

Dufty’s re-election campaign has already received a significant number of contributions from individuals in the real estate and construction industries— contributions from several times more donors than other candidates have received. Overcoming the inertia of the San Francisco political/commercial machine can be daunting.

The first step for District 8 voters is to look past the patina of district servitude that Dufty presents, and understand the trends behind his representation in District 8.
Then we need a winning candidate. Dufty’s leading opponent in the race has been endorsed by the major women’s and environmental organizations in San Francisco, further evidence of the lack of faith in Dufty to provide solid leadership.

Next we can acknowledge that if the nice guy does not finish first in this race, he’ll be taken care of within city government. Dufty has served the political machine well, and his future is likely secured.

Finally D8 activists must be willing to volunteer to campaign for change in District 8 this election. Most voters are not engaged in district politics enough to understand the issues and alternatives on their own.

On the local level every individual volunteer makes a significant impact. And volunteering is the most direct method to affect political change. Here’s a call out to D8 volunteers to take the lead and stand up for fair representation of the progressive values here in District 8.

Michael Poremba is a D8 resident and works as a Data Architect in the Healthcare industry. His statistical analysis and graphs of Dufty’s voting record are available for download by clicking here