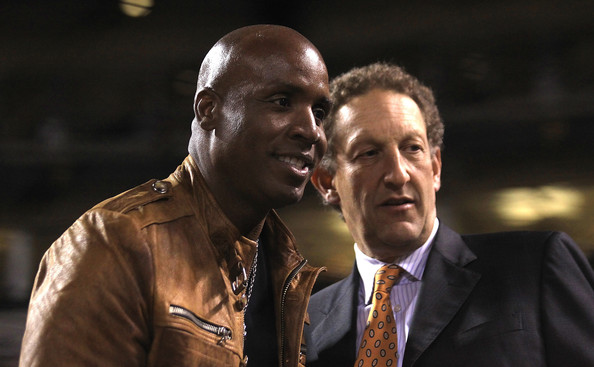 (Ed Note: Fans are split over Barry Bonds’ return to the Giants. Here’s a negative view)

I was disappointed to learn that Barry Bonds has joined the San Francisco Giants as a special assistant to CEO Larry Baer.  His duties will include a blend of coaching, marketing and ambassadorial duties.

Is an unrepentant PED user the right ambassador for the Giants and baseball?

Remember, Bonds testified before a grand jury that he received and used “cream” and “clear” substances — steroids put on the skin and under the tongue, respectively — from Greg Anderson of the Bay Area Laboratory Co-operative (BALCO), a San Francisco Bay Area business which supplied anabolic steroids to professional athletes.  Both are performance enhancing drugs (PED).  Incredibly Bonds claimed he was told they were the nutritional supplement flaxseed oil and a rubbing balm for arthritis.

Anderson was later found in contempt of court on two occasions for refusing to testify before a federal grand jury investigating perjury accusations against Bonds.

However, Bud Selig, Commissioner of Baseball, owners, and fans loved the way baseballs were flying out of the park, making baseball more profitable than ever.  Supposedly, they knew nothing about PED use among players until Jose Canseco published his tell-all book Juiced: Wild Times, Rampant ‘Roids, Smash Hits, and How Baseball Got Big in 2005.

Fainaru- Wada and Williams claimed that the Giants knew that Anderson “was rumored to be a dealer” of steroids, but “decided it didn’t want to alienate Bonds on this issue,” and so allowed the trainer continued access to the clubhouse.

Bonds’ lack of credibility and the substantial circumstantial evidence have convinced me and others that Bonds knowingly took PED, and thus his reputation and legacy are forever tarnished and will now forever tarnish the Giants.

Before joining the Giants, I would have expected them to at least require Bonds to finally come clean about his knowing use of PED.  But I guess it doesn’t matter to the Giants.  Will the National Baseball Hall of Fame and Museum followed by a statue at AT&T Park be next for Bonds?

Few seem to care about Bonds joining the Giants.  In this age of wide-scale cheating and lying by our president, other public officials, researchers, school officials, students, etc., Bonds’ use of PED is irrelevant to a lot of people, including the Giants ownership.  I guess the argument that baseball is just entertainment and “everyone” was doing it rules the day.  As a Giants fan, it matters to me.