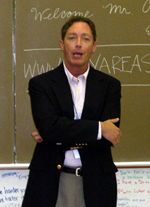 Is this worse than a recurring nightmare? Like the one I had when I was young: a passenger in an air boat (you know, the kind used in the Everglades) driven by a phone company operator, downhill on a straight 4-lane highway, only the operator couldn’t steer and the air boat kept spinning out of control and in circles.

Well, as the title of this editorial suggests, Ken Garcia has returned, but not with the Chronicle. No, it seems the … ahem … ‘progressive’ Examiner has hired the guy.

Now, if you wish to nauseate yourself, go to sfexaminer.com and prepare for a captioned photo, with the caption reading “Free Ken Garcia.” My initial gut feeling after seeing the photo was a slightly different caption; and being a former broadcast journalist, I envisioned the following scenario.

Late night news, back from a commercial break, and the screen is immediately split showing the news commentator on the left and the Garcia photo on the right, with a simple caption reading something like 05 129 418, which would be the number being held by Garcia.

And my fertile imagination produced the following story:

‘San Francisco police have issued an all-points bulletin for Ken Garcia. The suspect is wanted in connection with a series of impersonations, apparently totaling more than 400 counts. A spokesperson for the police department stated that the suspect should be considered armed and extremely dangerous and carries a pen that he uses to assault City residents. Do not approach but call the telephone number we will show at the end of this story.

‘Detectives believe Mr. Garcia to have repeatedly, over the course of several years, impersonated a journalist, and is wanted in connection with numerous assaulting stories that were written to promote right-wing ideologies while bashing people of integrity. His victims to date include Board of Supervisors President Aaron Peskin, District 6 Supervisor Chris Daly, former District Attorney Terrence Hallinan, and hundreds of thousands of San Franciscans who wish to remain anonymous.

‘Again, we repeat, do not approach the suspect, but call the number being shown now.’

Several months ago, the new owner of the Examiner proclaimed he wanted to mold the paper into a progressive news source. Maybe he meant progressive as compared to Pat Robertson. But to employ a right-wing extremist like Ken Garcia is hardly how I would define a course of progressivism, and make no mistake Garcia is an extremist.

For example, in May 2003 he showered praise on former supervisor Tony Hall, who at the time was the most conservative on the board; of course, now we have Cabbagehead Sean Elsbernd who will probably be the recipient of Garcia’s praise, along with the accolades Garcia has heaped and continues to heap on Gavin Newsom. In that article Garcia referred to most of the supervisors — in 2003, mostly progressive — as “politically wrong-headed.”

Throughout the years with the right-wing Chronicle, Garcia proclaimed the success of Care Not Cash, the Newsom program that takes general assistance checks from homeless people and makes them pay for a shelter bed that used to be free, that is, if they can find a shelter bed every night. And they’re left with $59 a month for food and other essentials.

In November 2003, Garcia stuck his foot in his mouth when he asserted “San Francisco is becoming more of a transitory town, filled with people not nearly as attuned or mindful of its traditions.” He apparently forgot he’s a transplant from Southern California, and his history in San Francisco is as fleeting as his integrity.

Garcia has referred to our City as “the nation’s drug capital” and to Terrence Hallinan as “arguably the most soft-on-crime prosecutor in state history” because the former district attorney preferred not to prosecute anyone caught with medical marijuana.

You remember my October editorial composed as a farewell to the purveyor of right-wing rhetoric detailing Garcia’s frequent and ongoing attacks on the integrity of the honorable Chris Daly, so I won’t revisit that history today.

But the final insult with the Examiner’s hiring of the crazed Garcia is the fact that Garcia hates San Francisco and despises San Franciscans because of our progressivism. In numerous columns Garcia has referred to us and our City as “a municipal zoo” run by “politically wrong-headed” supervisors, 11 of them which the right-wing Garcia has declared is too many politicians when 5 would suffice.

When Arnold Schwarzenegger stole the governor’s chair from Grey Davis in 2003, Garcia displayed his contempt for our City and for San Franciscans in general in an October 2003 column. Lavishing Schwarzenegger with high praise, especially for the transition team that included former Mayor Willie Brown because Arnold chose to have “the best deal-maker in state history on board,” Garcia wrote that:

“That’s a good thing for San Francisco, since 80 percent of the town’s voters gave a thumbs down to Schwarzenegger, showing the world once again why San Francisco should never be taken seriously when it comes to politics.”

Garcia’s first column with the Examiner is Tuesday, the 13th, and if he’s smart it will also be his last column before he leaves for … Spokane, Washington … that’s a conservative community where Garcia would fit in. He’s certainly not welcome in the most progressive city on the planet.

Please do not practice sadism by reading Garcia’s column — I simply must advise you against self-infliction of pain. But if you must choose a life of sadism, then try something less painful, like lying on a bed of nails. Of course, there’s a positive point to this: at least you don’t have to pay for the Examiner.

As a journalist, I have to read what right-wing extremists are saying and will keep you informed of anything useful from Ken Garcia, and with that I have successfully let myself off the hook. Phew!