Guest Editorial: 21 Points Towards an Agenda for Housing Justice 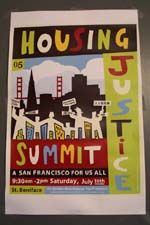 Mostly because of the opportunity to spend quality time in beautiful weather with the one I love, and secondarily because that sounded so much better than sitting in a Church listening to paid activists proclaim an agenda predecided by a small group of self-selected insiders, to which the rest of us would simply be one of many unwitting legitimating, ratifying warm bodies, I avoided the Progressive Housing Summit this past weekend.

Submitted for your approval are 21 points that would probably not see the light of day in the Twilight Zone that is progressive housing activism yet are the product of 5 years of intensive observation of of the function and dysfunction of housing politics and policies in San Francisco. Homelessness is intentionally omitted because success in addressing it is contingent upon success in areas other than housing and land use, such as substance abuse and mental health which are important yet probably outside the scope of the summit.

1. Policy proceeds politics. Too many creative and innovative housing policies are held hostage to the financial or turf interests of individual nonprofits. What we are doing now is not working; not only are we losing, we are getting our collective progressive asses kicked so long as inclusionary affordable rates lag around 20% on aggregate and luxury housing proliferates. Progressives must consense on policies absent any direct financial interest on the part of any party and pressure those who do not benefit directly to not oppose them on spite. Individuals and organizations with financial interests must recuse themselves from fashioning policy in those areas.

2. Policy proceeds personalities. The arrangement of the San Francisco Information Clearinghouse made in the 1970s was for individuals to take responsibility for areas of expertise concerning affordable housing. This model has been extended from the successes of Prop M (1986) to be the basis for the progressive coalition in the 1990s but has been unable to grow with the progressive movement as it has grown in the era of district elections and the Gonzalez campaign. Designated individuals or organizations are incapable of fully analyzing circumstances and proposing solutions alone, and we do ourselves a disservice by dividing labor vertically. Newer models of organization demonstrate that horizontal cross pollination is more successful than the SFIC model.


3. Respect for all comers irrespective of age, gender/identity, perceived class or ethnicity. Many in the affordable housing community have been at it for several decades and believe themselves to be either divinely inspired with the truth or so knowledgeable as to be unassailable on matters of policy. Frequently, these hyper-entitled, boomer-era, straight white men resort to ad hominem attacks, insults and disparaging remarks against those who might challenge their perceived insight rather than engaging on the issues. Almost exclusively, these individuals attack those with much less power than they enjoy to a degree that is disproportionate to the amount of deference they give to the powerful in pursuit of funding for their projects. This discourages the least powerful San Franciscans from participating, especially youth, women and people of color. We must all resolve to call them on it when they do it in order to create a climate where this conduct is simply not acceptable.

4. All CCDC’s (housing nonprofits) must be democratically run organizations that empower residents/tenants and neighbors along with the CCDC’s board of directors and staff as a prerequisite to receive city funding. CCDC’s are the 900 pound gorillas of the San Francisco progressive community; their budgets and staffs dwarf all others. Many are governed and staffed by people who do not live in and don’t look or think like the neighborhoods they serve. Fundamental reforms are required that would root all CCDC’s in the neighborhoods so that the wild oscillations that we saw with Mission Housing Development Corporation are avoided in the future.
5. All tenants in CCDC properties must enjoy full protections under applicable local housing laws as they do not now and are therefore vulnerable. This deal cut between tenants advocates and CCDC’s benefits both to the detriment of CCDC tenants is abhorrent and is typical of the liberal and patronizing attitudes of so many in the affordable housing community that produces really bad policy.
6. Oppose Housing Bonds. Bond funding enriches Wall Street investment bankers and costs taxpayers a 25% premium to service the loans. This is a bad way to fund large scale non-speculative housing construction; it is only viable if there is a big speculative payout in the end.
7. Oppose tax increment financing (TIF) and redevelopment. TIF takes the current property tax generation of a project area as a baseline and, after Redevelopment does its work, dedicates the additional tax revenues, the increment, to the SFRA for its uses. Aside from SFRA governance issues, TIF ties the hands of legislators and presumes gentrification as a means to generate more tax revenue in the project area.
8. Ballot measure to take SFRA and SFHA from exclusive mayoral control, possibly combine them into a Community Development Commission and divide appointment authority, possible merge with point 8.

9. Remove the Mayor’s Office of Housing from the Mayor’s office and provide citizen oversight to its operations, possible merge with point 7. Currently, MOH operates in a vacuum and has been responsible for disbursing all affordable housing bond funding, both new construction and down payment assistance, and planning collected development exactions. MOH green-lighted funding from the 1996 Proposition A Affordable Housing rental portion that was supposed to go to constructing rental housing for teachers, cops and firefighters for a short-term (90 day) drug rehab center in violation of the covenant made with the voters.
10. Tie height, bulk and density bonuses to the ability of the City to buy into 1/2 of the units that result from that bonus with public funds and to own 1/2 of bonus units free and clear. Anti gentrification land use strategy was based on keeping land values low by limiting heights under the hope that there would be bond funding to buy it up and build affordable units on it. This offers a way for the City to take advantage of the economies of scale and efficiencies of the private sector wielding the carrot of height bonuses with a stick that coerces cooperation.
11. District integrity and electoral justice. Oppose gentrifying entitlements no matter how much tax increment money goes to CCDC’s if those entitlements would shift the voting patterns towards a pro-corporate agenda. This would target Mid-Market, Transbay, Treasure Island and Rincon which threaten to turn District 6 into a moderate/swing district; the planning hand of Willie Brown coming back from the political grave to wreak havoc.
12. Support rent controlled unit acquisition and limited equity conversions before TIC financing vehicles becomes stable. If we don’t buy it, we will lose it.
13. Build new construction only for San Franciscans not for Real Estate Investment Trusts (REITs) or pied-a-terres. We do nothing to solve the housing crisis if we entitle construction of new luxury housing that fewer than 5% of San Franciscans can afford. Building housing for second homes or for investments is a losing proposition and bad policy. Any new tax revenue generated would be directed away from social services to the needs of luxury residents. New construction housing in a neighborhood should be targeted proportional to the unmet housing need for that area. This means we have to break with the HUD 60/80/100 AMI formula.
14. Subsidy retention. Instead of sending public dollars into the pockets of landlords, those dollars should be invested in purchasing housing. Section 8 and the master lease program dollars should all be redirected to invest in purchasing the housing they are renting. Eminent domain over residential hotels with mortgage revenue bonds funding acquisition should be explored.

15. Broad based progressive gross receipts tax to fund housing. Align with transportation, education and health care communities to propose Big-Four GR tax, in concert with consultations with the small business community that would replace the payroll tax and augment it by 20-25% to recover from the 2001 settlement over 5 years.


16. Rent Control is a stopgap measure that cannot be strengthened enough to make a difference given economic pressures and the constraints of state law. Until the vacancy control problem can be solved with the average tenancy lasting 5 years, rent control is a slow leak of affordabilty. We must creatively think and experiment our way out of the constraints imposed by Costa-Hawkins.


18. No evictions for affordable housing projects. Yes, this really happens.

19. Nonprofit accountability. I subscribe to the theory that the shift from government to nonprofits was designed as an insulating layer between the people and a pro-corporate government. People thus direct their energies for the nonprofit’s mission and the nonprofits protect their sources of funding by deflecting activism against the structures of power and dominance that are at the root of our social and economic problems. Mandate disclosure of nonprofit (and for profit) funded activism and advocacy before public bodies. Forbid CCDC’s from absconding from San Francisco with our property. I bet you didn’t know that CCDC’s as 501(c)3/4’s can decide to cease operations in San Francisco, liquidate their (often publicly acquired) holdings, and start up operations elsewhere. This possible theft must be explicitly precluded in any development deals. Nonprofits that are non performers, such as an economic development association that has failed at its Mission to develop its neighborhood economically, must be called on their failures rather than be allowed to continue on their trajectories on inertial autopilot from the 1970s. We need to start laughing publicly at nonprofit “leaders” from other neighborhoods and cities when they speak for our communities in ways that run counter to our interests.

20. Think long term and embrace the counterintuitive. The policies we devise today will portend consequences decades down the road. For instance, if we leverage the rental streams of middle income San Franciscans to acquire buildings today under limited equity, then decades down the road when those buildings are somewhat paid down, they will be affordable for much poorer folks then.