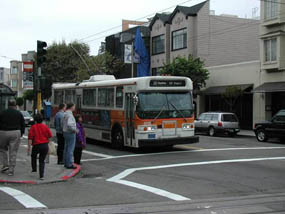 Not many San Franciscans have heard of the Transit Impact Development Fee (TIDF). Enacted in 1981, the law imposes a one-time $5 per square-foot fee on new downtown office construction to defray added costs of MUNI service. Remarkably, this fee has not increased in over 20 years. Today, the Board of Supervisors will consider new legislation that would double this fee. Millions of dollars in funding for public transportation is at stake.

The failure to increase this $5 per square foot has deprived MUNI of much needed revenue. As dotcom office development boomed in the South of Market area in the 1990’s, the TIDF fee was not even adjusted for inflation. The $5 per square foot fee, a figure based on studies of the cost of additional MUNI service in 1981, was a pittance when charged in the 1990’s.

More recently, low interest rates have fueled further nonresidential construction. The city will incur substantial additional MUNI costs in the future to bring workers and customers to these new office developments. According to a recent study by the city, the current TIDF offsets only a small fraction of the increased MUNI costs from new commercial developments.

Supervisor Jake McGoldrick is sponsoring legislation to raise the TIDF. The ordinance would increase the TIDF from $5 to $10, and perhaps more importantly, the fee would be adjusted according to the inflation rate in the future. The ordinance would also expand the number of new commercial developments that are subject to the fee. Rather than applying only to a small downtown zone, the fee would be charged to new nonresidential developments anywhere in the City, except for developments under 3,000 square feet.

Supervisor McGoldrick originally sought a fee of $14 per square foot, up to $35 for certain types of developments. Not surprisingly, developers objected. Ignoring the huge break developers had received from two decades of a fixed $5 fee, the San Francisco Business Journal featured an article criticizing the proposed ordinance with the following headline: “Transit may take developers for ride.”

The resulting compromise legislation is not perfect. But if San Francisco is serious about its Transit First policy, the TIDF must increase.

Those who are interested in this issue should attend the meeting of the Land Use Committee of the Board of Supervisors on July 12, 2004 at 1:00 p.m. in Room 263 of City Hall.

Dean Preston is a Muni rider and staff writer for Beyond Chron. He can be reached at Dean@thclinic.org