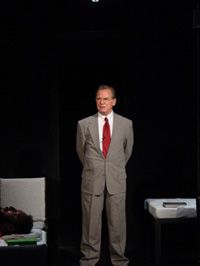 HONOR BOUND TO DEFEND FREEDOM. A Docudrama about Guantanamo – the horror near the shore. Moazzam, one of the inmates at the infamous prison on the island of Cuba writes to his father: — “of news, I have ‘inflicted’ upon the authorities here, that some may have found their way to you.

My experience thus far however, has left me to believe that much of my mail to and from home has been deliberately constrained. Including even, pictures of the family. I have yet to receive any of them father. I have not received any communication that was brought over by the visiting British delegation despite the fact that they informed me that they were handed over.”

O.K. here are men that are being kept in an American run prison that seems to trod on the human rights of individuals. This docudrama story is told through the letters from prisoners to their family members. As interpreted, they seem to be innocuous enough. Just stuff about daily life and how is everyone. Of course, those that did get through were heavily censored.

Guantanamo is a difficult play to discuss, let alone review without editorializing. The play after all is weighted heavily towards people in a prison that are abused. They can have not legal representation, no visits from their family. Some have been held there for more than three years. The prisoners in question (picked up for suspicion of being terrorists or aiding and abetting terrorists are British citizens. Even the Brits can’t seem to help them. Or do they care? That is the question. No one seems to get his or her day in court. Who knows if any of these men are guilty or not, but we will never find out. There are still many held in that prison that have yet been able to talk to an attorney or their family. You could pose the question – is this justice?

I am appalled by human suffering – especially when I don’t know if the person is guilty or not. In Guantanamo, we don’t actually see heavy abuse. We don’t hear screams. The audience can tell however that this is not Club Med.

The only light side to this drama is Robert Langdon Lloyd at Secretary of Defense Donald Rumsfeld, who says a lot, but says nothing. Lloyd looks amazingly like “Rummy”. His statements of course are absolutely ridiculous as he dodges the questions and answers what he wants with cagey non-speak. But, you have all seen the real thing – I don’t have to tell you how he is. You already know.

Guantanamo is a revelation of insights into people’s lives through their letters. Much like “Love Letters” – told about love, this goes further and tells us about hopes and dreams that may never come true. The staging is very effective with bars and shadows
And the re-enactments of the incarcerated are extremely effective in the hands of this superb cast.

Guantanamo is political drama that will not be for everyone. In other words, I don’t think it would play well in a red State stage.

At the end of the play, the members of the cast never go out of character. They don’t come to the edge of the stage for the usual bows. Powerful stuff. It leaves the drama in your mind for hours after. The casting director has found the right people. They are: Robert Landon Lloyd, Harsh Nayyar, Ramsey Faragallah, Dion Graham, Julia Brothers, Steven Crossley, Ramiz Monset, Joseph Kamal, Nick Sholley Nafees Hamid, Joris Stayck, Steven Crossley. All, absolutely stunning! At the opening Danny Glover gave at Monologue at the beginning and end. The tradition will continue during the run with various celebrities.

RATING: THREE GLASSES OF CHAMPAGNE. AT THE BRAVA THEATER.

JUSTIN MCKEE at the Plush Room for a couple of days has a versatile voice. When he is good, he is very good. The problem with McKee is that he sings a lot of his own songs. A mistake that many new performers make. They, of course think that have written the best thing since Tin Pan Alley days – but in most cases the songs are maudlin and they all sound the same. This was a big problem with the McKee performance, plus the fact that he insisted on showing us all his talents in one night. He stayed hidden behind the piano for most of the evening, playing and singing. Finally he stood up in front of the audience – and sang a couple of songs with his band. Then he reaches over to play a guitar – first tuning it up, plugging it in making electronic popping noises as he did so. This was amateur time. Just sing Justin and forget the gimmicks. Later on he goes through the same routine with a different guitar. Again, we sit through the tune-up and more of his dreary songs. Songs with boring, overworked phrases like “Girl, you know”. Spare us the wandering lonely troubadour stuff about pining about girls around the camp fire. It’s been done too many times before.

The arrangements, which I presume were McKee’s, were the same on every song. There was no imagination and no variance in the beat. The drummer did the same swatting of the drums every time. Even McKee’s effort to bring some familiar music to the audience failed. His medley of show tunes – got dragged through his morose arrangements.

McKee also has this annoying habit of continually sucking on water bottles every few minutes. Apparently he hasn’t read the health reports that say that too much water is not good for you. He admitted that he sings his own songs, because they are on his album, which he would like you to buy. For what reason? As coasters under drinks?

Sorry Justin. You have talent, but it is misdirected and under rehearsed. The most interesting about your show was Bill Hampton on the Electric Guitar.

NEXT UP AT THE EMPIRE PLUSH ROOM is the always-delightful Sharon McNight April 5 – 23. McNight will give a tribute to three great stars of the silver screen, in her show called “Betty, Betty and Bette.” McNight will be paying tribute to Hutton, Grable, and Davis. With a Sharon McNight show you can always expect great musical entertainment and her famous bawdy humor. Tix are hot and going fast.

BEST OF BROADWAY ANNOUNCES IT’S 2005 – 2006 SERIES. Expect these shows. The fabulous “Wicked” is coming back in the summer. “Annie” is still looking for Tomorrow and will be here in the fall. The popular new musical Irving Berlin’s “White Christmas” that was last at the Curran will return for the Holidays in o5.
San Francisco will get another Pre-Broadway Premiere “Shining City” in the fall of 05. Here is another Pre-Broadway musical ” – the Johnny Cash Musical “Ring of Fire”. Followed by the all-male Swan Lake in the spring of 06. The last two planned shows are “Lestat”; another pre-Broadway winter premiere in 05, and last will be the new revised Chorus Line in the summer of 06.

OPENINGS: Shakespeare’s “As You Like It” at the Curran April 6, and the new Musical “Lennon” will open at the Orpheum later this April.

CHEAP TALK! If you’re looking for great cheap entertainment, then you should check out the extremely varied film fare at the Balboa Theater. Coming up is Jack McCoy’s Surfing Film Festival. On April 15. Later at the Balboa screen will be a month of films that were filmed in San Francisco. The series is called “The Reel San Francisco”. Some of the films will have filmmakers and authors introducing shows. Bullitt kicks off the series with the astounding famous car chase up Twin Peaks that you have ever seen. McQueen, of course is cool in his turtleneck in 60’s San Francisco. I think I saw him at Lands End looking at the Ocean during that filming. I said “Are You Steve McQueen” – He denied it. He lied — it was him. The Balboa has the most imaginative screenings in the city – and there is that cheap price for Tix. Plus, they have a newsletter that tells you about free tickets to other theaters and other neat Movie Stuff. Go to BalboaMovies.com