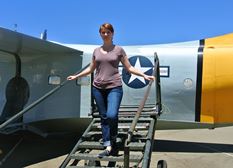 The San Francisco Playhouse Sandbox Series creates new works where actors can go the next level. This is an amazing professional Theatre experience. You are there — you are part of the atmosphere. Actually, so close that the Actor looks right into your eyes.

‘GROUNDED’ is one of those plays where good acting takes place. In this exciting play, Lauren English again brings a tense and exciting evening to the stage. English has been seen in many innovative and exciting plays at the San Francisco Playhouse – but this time — this one person World Premiere Sandbox Series, takes you on a flight that you won’t forget.

She meets a guy in the service. Lauren and Eric both fly Hot Shot Planes. They fall in love. She becomes pregnant. She begins to gain weight. And she will have to stop flying for awhile. That’s what the General says. Her boyfriend has to leave to fly right now. Eric tells Lauren that he will miss her while he is gone. He touches her belly and kisses it. She is sad, and becomes lonely. Lauren says: “I talk baby talk now”.
Then there is a problem. Eric – Lauren’s boyfriend has a hard-on for a hot looking blond girl that also loves fast moving planes.

Lauren begins to fall apart while Eric is gone. It’s like she wants to die. Yeh, Lauren’s a hot-rod fighter who has an unexpected pregnancy. She won’t be flying in the sky for some time. Care to take a flight in your chair? You’re gonna like it.