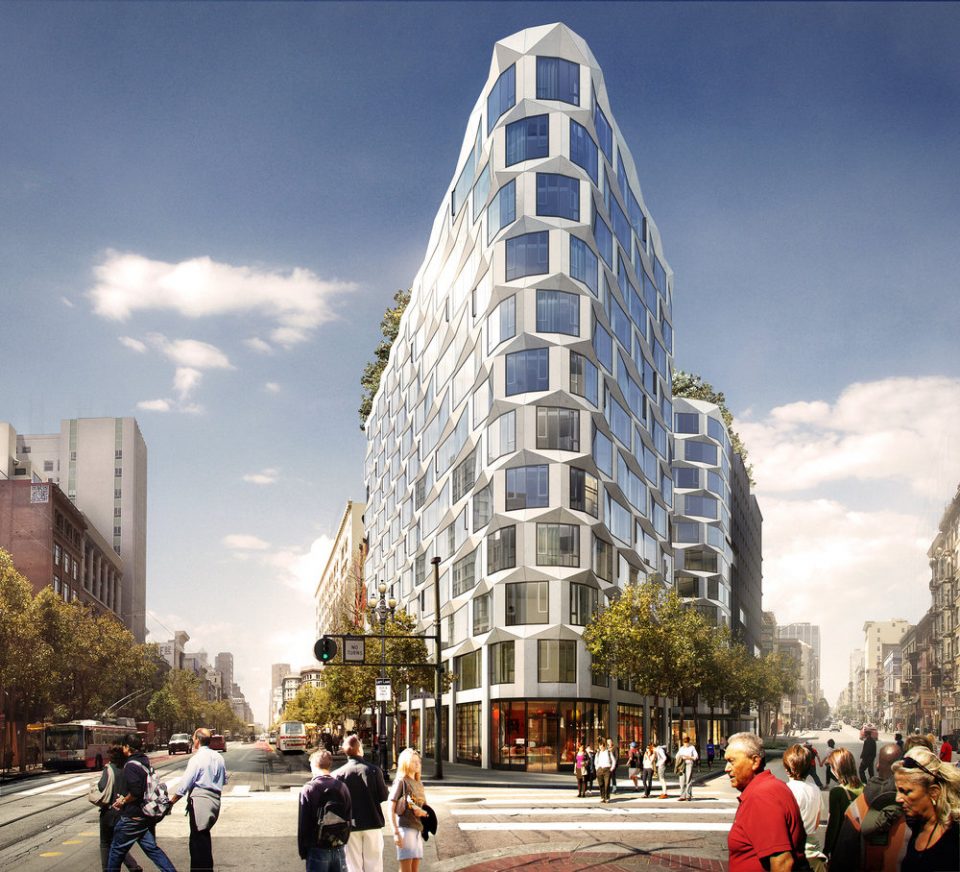 On October 25, groundbreaking will begin on San Francisco’s most impactful development outside of the new Warriors arena. It takes place at 950-974 Market, a new hotel and condominium in two striking new buildings surrounding the historic Warfield Theater.

Developer Joy Ou and her Group I company will usher in the most dramatic new project slated for Mid-Market since Mayor Lee pushed to revive an area suffering from fifty years of economic malaise. Yet San Francisco’s hostile housing approval process almost killed it, and only Ou’s tenacity kept it alive.

It is almost unprecedented to see such a huge vacant site in the middle of Market Street. Ou acquired all of the properties on the block with the exception of the Crazy Horse strip club, whose owner would not sell. She had to convince investors to fund the construction of two upscale properties in a long failed area—-directly across the street from the long vacant 250,000 square foot 6 X 6 shopping plaza (so much for the adage “if you build it retail tenants will come”). It could not have been easy.

But after Ou secured the investment capital she had to deal with the Planning Department’s micro-managing of her design for the two buildings. Ou wanted a striking design that would cause the buildings to stand out. Planning decried “Facadism” on one hand while insisting that the south Turk Street side of Ou’s buildings match the facades of historic SROs on the north side of Turk.

This was no simple dispute. Ou was putting millions of dollars into a project and had a vision for making it a success; the planning department felt it had the right to radically change Ou’s design so that the new condo and hotel would match SRO’s built over a century earlier.

So Planning delayed the project. Although construction was initially planned to commence in 2016, a Planning Commission hearing was not set until that July. Planning Director John Rahaim then personally demanded that the project be pulled from the calendar because he opposed Ou’s design. He moved the hearing back to November, but Ou won the right to present to the Commission both her design and that favored by Rahaim.

The Commission ultimately approved the project and voted 6-1 for Ou’s design. But the four month delay had consequences, as it cost the project a major investor. Ou had to resume raising money for the project, and fortunately for San Francisco she succeeded. But Planning’s actions effectively delay construction for nearly a year.

This is why Mayor Breed’s new Director of Housing Delivery position is so critical. San Francisco came very close to losing its most important Mid-Market project over a planning department action that a Director of Housing Delivery could have overridden (I view the Shorenstein project at 1066 Market as the key Tenderloin rather than Mid-Market project given its small Market Street frontage).

Because Ou went out of her way to fulfill Tenderloin residents’ request that she do off-site inclusionary housing, a step-up housing project for SRO residents is set for the now city-owned 180 Jones Street (at Turk).  This project was pushed back in response to the delays in the market-rate project.

A Model for Developers

In my new book on how cities can expand working and middle-class housing, I use Joy Ou as a counter-example to what often occurs when residents and developers tangle in the Mission District.  Mission activists have used confrontational tactics to great success, but Ou and Tenderloin residents show that equally good results can be obtained in a spirit of cooperation.  Of course, it all depends on the parties involved but Tenderloin residents got an historic jobs commitment from Ou in addition to step-up housing.

All while maintaining great relations and mutual respect.

Unfortunately, I will miss Thursday’s groundbreaking with Mayor Breed as I will be in Austin for the Texas Book Festival. But the residents who worked out the historic deal with Ou, along with many others, will be there with her to celebrate.

Randy Shaw is Editor of  Beyond Chron. Pick up his new book on effective strategies for addressing the urban housing crisis, Generation Priced Out: Who Gets to Live in the New Urban America (UC Press, 2018).