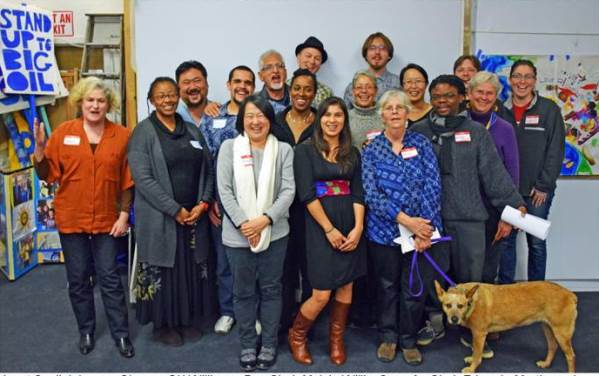 As Kermit the Frog, America’s most famous Muppet, says: “it’s not easy being green.”

Preliminary results of the Green Party’s latest national campaign confirm the reality of his observation. The Party’s much-touted goal was getting 5% of the vote on Nov. 8, so it could qualify for $10 million in federal funds for 2020 campaigning and maintain broad nationwide ballot access.

Despite fielding Jill Stein, a presidential candidate who was substantive, social media savvy, a good fund-raiser, and experienced at running for office, the Greens received about 1% of the popular vote, based on tallying so far. That’s several million less than in 2000, when Ralph Nader was their candidate, although twice as many as Stein got during her first presidential run four years ago.

While conducting a spirited, if much ignored, campaign this time around, Stein had to endure the slings, arrows, or lamentations of leftists justifiably worried about Trump beating Clinton. Writing for In These Times, Kate Aronoff was one of many who chided Stein and her party for “putting too much emphasis on the presidency.” According to Aronoff, the Greens invest only “meager resources” in local politics and “that’s not where the party’s heart is.”

After Tuesday’s national results, the Greens might want to re-think where their heart is or should be. One model for becoming more effective, at the municipal level, can be found in the biggest city ever to elect one of those 57 Green mayors. As I describe in Refinery Town: Big Oil, Big Money, and the Remaking of an American City (forthcoming from Beacon Press in January), a Richmond, CA. group founded by Greens has fielded 16 candidates in local “non-partisan” races since 2004. Candidates for mayor or city council backed by the Richmond Progressive Alliance (RPA) have won ten of those contests, a success rate far better than the Green Party’s local-election track record during the same period.

On Tuesday, this year’s RPA standard-bearers—Melvin Willis and Ben Choi—placed first and second in a field of nine running for Richmond council seats. In January, the 7-member council will have an unprecedented progressive “super-majority” of five. In addition, the RPA’s coordinated “Team Richmond 2016” campaign helped pass rent control by a strong margin. Rent regulation has been a longtime goal of local housing activists; in several other Bay Area communities where the same issue was on the Nov. 8 ballot, the combined spending of the landlord lobby and real estate industry defeated this reform

Progressives have succeeded, as an electoral force in Richmond, because they built a political organization which functions year round, not just at election time. The RPA has a dues-paying membership, a multi-issue organizing program, and elected leadership that includes both individual activists and representatives of allied labor and community organizations. Instead of branding itself, narrowly, as a Green Party branch, the Richmond Progressive Alliance (RPA) welcomed progressive independents, left-leaning Democrats, and socialists, along with voters registered as Greens or members of the California Peace and Freedom Party, a relic of Sixties’ radicalism in the state.

Like Greens elsewhere, founders of the RPA backed Ralph Nader’s presidential run in 2000. Post-election, they went local, creating a group initially called the Richmond Alliance for Green Public Power and Environmental Justice. They launched a series of single-issue campaigns with broad appeal in a largely non-white city of 110,000. They challenged Richmond police misconduct and harassment of Latino immigrants in traffic stops and day laborer crackdowns. They helped block a new fossil-fueled municipal power plant that would have added to neighborhood pollution and pushed for alternative energy solutions instead. They won passage of a stronger industrial safety ordinance to reduce the risk of refinery fires, explosions and chemical spills at Chevron, the city’s largest employer.

When Alliance leaders like Gayle McLaughlin shifted to electoral politics 12 years ago, they distinguished themselves by refusing to accept business donations, while welcoming the support of progressive unions. The RPA steadily expanded its grassroots base through volunteer recruitment, door-to-door canvassing, and well-targeted voter turn out efforts. The group developed campaign management expertise and a reliable network of small donors who have helped its candidates qualify for public matching funds since Richmond adopted that key campaign finance reform.

During her two terms as mayor (from 2006 to 2014), McLaughlin promoted continuous synergy between her activist city hall leadership and on-going grassroots organizing in Richmond. When she was up for re-election six years ago, Richmond still had less than 500 registered Green voters; nearly 70 percent of the city’s voters were Democrats. Nevertheless, McLaughlin was able to defeat two business-backed Democrats, who ran with heavy funding from the local building trades council, police and firefighter unions, Chevron, and other business interests.

To counter the political weight of organized labor’s conservative wing, it helps to have other unions on your side. That’s been a challenge that few Green candidates, at any level, have met. In 2000, Ralph Nader’s presidential campaign won the backing of just two small left-led unions, the California Nurses Association and the United Electrical Workers; this year, even they ignored Stein. In Richmond, however, the more ecumenical approach of Greens, like McLaughlin, has led to strong RPA ties with the CNA, Local 1021 of the Service Employees International Union (which represents Richmond city employees), the National Union of Healthcare Workers, and locals of the American Federation of State, County, and Municipal Employees and Amalgamated Transit Union, both of which have members living or working in Richmond.

In 2014, Chevron pulled out all the stops to defeat the RPA with $3.1 million worth of “independent expenditures” against McLaughlin and her city council running mates. She invited Vermont Senator Bernie Sanders, then weighing a presidential run, to come to Richmond and help counter this post-Citizens United spending blitz. Sanders raised money for the RPA and its candidates, speaking at a pre-election Richmond rally, which pre-figured West Coast events held on his own behalf less than a year later (with crowds 40-times larger).

While Greens elsewhere—and anti-Sanders socialists allied with them—objected to Bernie running as a Democratic candidate, RPA activists jumped into his California primary campaign. Breaking with Green orthodoxy, McLaughlin voted for Sanders in  June and urged her Richmond supporters to do so as well. This fall, the Sanders connection paid off again. Bernie’s post-campaign organization, Our Revolution, endorsed Willis and Choi (along with 100 other candidates around the country), raising $5,000 for each with a single email blast to past Sanders’ donors.

In an interview earlier this Fall, Jill Stein reported that the Greens are finally “exploring the idea of being a membership party where members are expected to support the party with dues” so its candidates can be more competitive in local races and “participate in social movements with real organizational and financial resources.”

That sounds like the right kind of Stein campaign follow-up. But if Greens really want to go beyond “protest vote” campaigns and actually win more elections to help build progressive movements locally and nationally, they should consider the path taken by their Richmond counter-parts more than a decade ago.

(Steve Early is a member of the Richmond Progressive Alliance who was active in Labor for Bernie. He has voted for Jill Stein five times—twice for president in the safe state of California, twice for governor of Massachusetts, and once for secretary of state there. He is the author, most recently, of Refinery Town: Big Oil, Big Money, and the Remaking of an American City, available in January from Beacon Press in Boston. He can be reached at Lsupport@aol.com)