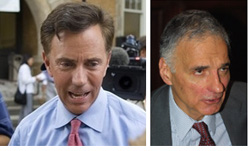 During a fundraiser for his 2003 San Francisco mayoral campaign, Green Party activist Matt Gonzalez told the crowd that it was not yet clear whether the Greens would go the way of the short-lived Free Soil Party of the 1840’s, or become the new second major party as the Republicans became in 1860. While such hopes may even then have been wildly optimistic, the national government’s control by right-wing Republicans has reduced the national Green Party to near-irrelevance. The days when the Greens could push the Clinton-Gore Administration to the left are long gone, and the Party’s current national political strategy is confused. The extent of Green confusion is evident from its running a candidate in the Pennsylvania Senate race whose campaign is 100% funded by conservative Republicans, and by the Greens running a Connecticut Senate candidate whose only impact will be to take votes from Ned Lamont.

According to Clay Richards, assistant director of the Quinnipiac University Polling Institute, “Bob Casey’s lead over Sen. Santorum has shrunk to single digits in part because the Green Party candidate is siphoning votes from the Democratic challenger.” The Green Party candidate, Carl Romanelli, received 5% in the poll.

The most troubling aspect to the Green Party strategy in this race is not that they are running a candidate that could tilt the election to the most right-wing, homophobic Senator north of Texas. Casey is no progressive, and Greens certainly have the right to give voters a progressive alternative.

But Romanelli’s candidacy is not a product of grassroots Green Party activism. In fact, the Greens did nothing to financially assist his signature drive to get on the ballot.

Instead, Romanelli turned to Santorum’s right-wing allies for funding. And since they viewed most Romanelli voters as taking votes from the Democrat, paying $67,000 to purchase a Green Senate candidacy was a great bargain.

If anyone can point to a race where the Greens took more votes from the Republican than the Democrat, please forward the information to me. Until such evidence is produced, yesterday’s Pennsylvania poll and virtually all others find Greens taking votes from Democrats.

As stated above, my problem is not that the Greens want to offer a progressive alternative to Casey. Rather, it is that there was apparently no grassroots interest in a Green Senate race in Pennsylvania, so rather than sit out the race, the Party simply sold its ballot line to right-wing Republicans.

From the Nader candidacy in 2000 to a host of other races, Green polling numbers decline as election- day approaches. The Green’s Republican-created Pennsylvania Senate candidacy is thus unlikely to prevent a Casey victory. There is also evidence that many of Romanelli’s ballot-qualifying signatures were fraudulent, so he may not even make it to November (when the Democrats sue to remove him on the basis of these fake signatures, we will no doubt hear Greens complaining of the Democrats denial of ballot access to grassroots candidates)

A Party that claims to be a grassroots vehicle for democracy should never have allowed its Pennsylvania US Senate campaign to be funded by the type of right-wing interests who the Greens scorn.

Even more confusing than the Green’s Pennsylvania strategy is the Connecticut Greens’ running a Senate candidate against Ned Lamont. For goodness sake, Ralph Nader has endorsed Ned Lamont, which should tell Greens that he is a Democrat they can support.

How can a Party that believes in progressive politics take action that could help re-elect Joe Lieberman?

What can possibly be achieved for progressives by a Green candidate taking 2% of the vote from Lamont? Why would the Greens possibly deliver victory to a man who will be undermining the antiwar cause day and night each and every day until November?

The answer from Greens in Connecticut and Pennsylvania may be that, like California’s perennial Green candidate Peter Camejo, the most “progressive” strategy is defeating Democrats. Camejo’s analysis sees Democrats as offering only false promises to the working-class, so defeating them is essential for the rise of a new, truly people-oriented Party.

But it is progressive Democrats, not Greens, who have grown in response to Republican rule. Meanwhile, Republican control of Congress and the White House has rendered the national Green Party politically irrelevant.

If Greens want to see their numbers and power rise, their best strategy is to get Democrats back in power—and then to mobilize against them from the left.