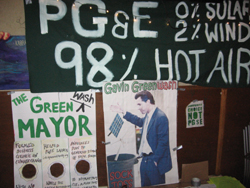 On June 6th, five members of the San Francisco Board of Supervisors voted unanimously to push the core of the Community Choice Aggregation (CCA) Implementation Plan out of the Budget and Finance Committee and on to the full Board for final approval. If you have not been following the progress of CCA’s implementation in SF, you should now take notice because San Francisco is getting very close to becoming a green beacon for the rest of California. The implementation of Community Choice Aggregation would require that 51% of the energy purchased through this program come from renewable sources by the year 2017. Unlike PG&E’s green hype, this would be a significant move towards creating a desperately needed local, renewable energy infrastructure.

An opinion held by some very conservative neighbors was expressed in Wednesday’s Examiner by Chamber of Commerce spokeswoman Carol Piasente. She stated that “businesses feel more confident having professionals provide their utilities, rather than turning it over to a public entity.” But if you unpack that argument a bit, its holes are pretty obvious. CCA does not put the responsibility of energy production onto the city; rather, it allows the city to purchase power from independent providers and to put restrictions on where the energy comes from.

It leaves the production of energy to the “professionals” and it allows for government to do what it should do — create regulations that hold businesses accountable to the communities they serve. In this case, the City of SF would require that providers have enough renewable generation in their portfolio so that SF can meet that goal of 51% of its power coming from renewable sources by 2017. The city’s responsibility would just be to purchase from independent providers who comply with the renewable regulations and can still meet or beat PG&E’s rates. It is curious that the Chamber of Commerce supports a company that has a monopoly on energy production and opposes a plan to localize, decentralize and create new businesses which would provide cleaner energy.

At the June 6 Budget and Finance Committee hearing, CCA’s economic impact report was released by the Office of the Controller. But at this point any economic data is only speculation. Any hard data that proves or disproves the feasibility of the requirement for independent providers to meet or beat PG&E’s rates is unknown until the city puts out both an RFI (request for information) and an RFP (request for proposals). At that point, the city will know if it is possible for contractors to meet or beat PG&E’s rates while also falling within the guidelines for renewable generation. That is why Wednesday’s vote was so important.

The CCA implementation plan now only needs a majority approval by the full Board and then the Mayor’s nod in order to proceed with contacting independent providers. It was reiterated on multiple occasions at the hearing that moving ahead with the CCA implementation plan does not lock the city into anything. It is only once the city has designated providers and has real numbers that it can go before the California Public Utilities Commission to get final approval for the plan.

We all know that PG&E is a fossil fuel (45%) and nuclear (24%) energy company. They may try to distract us with their well funded “lets green this city” campaign, but they cannot stop us from using common sense. This is a company that is heavily invested in dirty energy production and is going to milk all the profits they can out of that infrastructure before they would ever consider making a fundamental, systematic change to renewable energy production.

Thankfully, San Francisco has a strong and largely progressive Board of Supervisors who are more than happy to show PG&E and its dirty energy baggage the door. Granted, the implementation of CCA does not kick PG&E out on the street tomorrow, but it is a start. It gives SF some control over how and where our energy comes from! It does not stick the city with the responsibility and liability of creating energy for its residents. CCA in SF will begin to create the desperately needed renewable energy infrastructure and it will begin to weaken the monopoly on energy production that PG&E currently has.

Wednesday’s hearing was a big step, but CCA in SF is not a reality yet. On June 12th, the full Board will be reviewing the implementation plan. So get out there and show the Board as well as the Mayor that you are behind CCA, that you see it as a step in the right direction and that you are no longer satisfied with leaving our energy future in the dirty hands of PG&E.