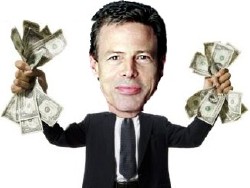 In my weekly read of the San Francisco Business Times (Sun Tzu taught his warriors to “know your enemy”), a seemingly-out-of-place opinion piece about our collapsing economy caught my eye. “It’s obvious that the people who say ‘no one saw this coming’ are liars,” writes Neil Westergaard, the editor of the Denver Business Journal. “The negligence is unconscionable. The behaviors are reprehensible.”

Westergaard continues: “The whole mess may bring on a generation of anti-business populism from which we’ll never recover.” We should be so lucky.

Westergaard’s premise is clear from the title of his article: “Greedy CEOs, lax boards created mess.” These grotesquely over-paid CEOs “believe they’re actually worth the money the knuckleheads on the board of directors are paying them.” In their “blinding arrogance… they saw the icebergs of foreclosure and incalculable risk” but “didn’t care, because it mattered not to them personally if their company and the entire financial system went to the bottom of the sea.”

Is the United States of America going to be a modern-day Atlantis, and sink to the bottom of the ocean? From where I sit, it feels like the whole country is sinking and the lifeboats are full of holes.

Monday I went to the “Immigrant Workers Speak-Out Against Wage Theft” in Chinatown’s Portsmouth Square. There I heard workers from the New On Sang poultry market, the Parc Hong Kong and Eastern Cafe restaurants, as well as domestic workers and day laborers, denounce bosses that don’t pay their workers minimum wage or overtime — or, sometimes, especially in the case of day laborers, at all. The hard-working activists at the Chinese Progressive Association put this rally together.

Good rally, very little press. The contrast between these exploited workers — right here in “progressive” San Francisco — and the greedy CEO brats couldn’t be greater. The CEOs command attention. The workers in Portsmouth Square are ignored.

Right next to Westergaard’s article is the result of a Business Times survey of its generally well-heeled readers. The question: “Should San Francisco consider limiting pay for executives of companies the city does business with?” No frigging way, say 72.6% of the readers of that downtown rag. Glug, glug.

Westergaard sees the problem as greedy CEOs. But the problem is not just selfish execs. Greed is exactly what our economy is based on — companies and corporations hungry for profit, no matter who gets hurt. That’s the nature of the beast called capitalism. That’s why the readers of the Business Times identify with the multi-million-dollar-a-year guys.

Westergaard concludes by admitting that he is “not sure how we fix this problem” of “grandiose entitlement” on the part of the CEO class. But he does say “I know one thing. The private sector better fix this problem, or the government will.” I said it once, and I’ll say it again — we should be so lucky.

Government fix the problem, you say? Which government would that be? The Obama one? Let’s hope his appointment of a rogues gallery of protégés of Robert Rubin is something other than what it appears. Rubin is the deregulation guru who presided over Bill Clinton’s economic policy team back when the groundwork for the current economic crisis was put in place. Today Rubin is with CitiGroup, which has paid him a cool $115 million since he joined their board of directors in 1999. CitiGroup is one of the world’s largest banking and financial conglomerates, and had to be rescued last month by a massive multi-billion dollar bailout paid for courtesy of US taxpayers.

Maybe the Schwarzenegger government is going to fix things? Hardly. California’s ship of state is sinking fast. And our local guy, the irrepressible Gavin Newsom, seems intent on slashing and burning every public service around (courts and jails excluded, of course). Newsom’s major ambition seems to be to displace Schwarzenegger at the helm of the Titanic, so he can rearrange some deck chairs.

The government isn’t who Westergaard should worry about. The people who should worry him are folks like the 250 workers at Republic Windows and Doors who occupied their plant in Chicago last week when the company shut down and tried to abscond with their severance and vacation pay — victims of theft just like those workers rallying in Portsmouth Square.

The Republic workers acted in the tradition of the great sit-down strikes during the depression years, back in the 30s, when the labor movement in this country was built. Militant workers won victories then, and the Republic workers who showed some true grit won today.

Maybe it’s time we all started sitting down for our rights.