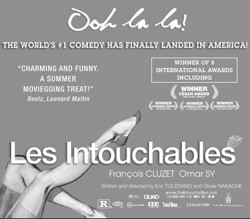 Last week I saw The Intouchables, a French movie about the adventures of a quadripalegic aristocrat and the African immigrant from the projects he hires as an attendant. This week, I saw the film’s advertisement on the bottom of the front page of the New York Times: the kicked-in-the-air legs of a woman obviously on her back next to a bottle of bubbly. In some national papers, this image has the title “ooh la la.” I had to triple check the movie title to be assured that this ad was for the movie I had just seen.

Sex has long sold everything – from soap to cars to clothes and, of course, movies. But The Intouchables doesn’t have a pair of kicking female legs anywhere in sight.

It’s a film about the relationship between two men: one white and staid, the other black and enthusiastic. One poor, the other rich. And central to the movie: one disabled, the other not. Women? Minor (well-crafted) roles, but definitely no one on her back – with stilletos!

Is this just another example of sex sells? In this case, the disconnect between the movie and its ad is so great that is has to be more than that.

The Washington Post movie review provides a clue: According to the Post, “‘The Intouchables’ is a feel-good movie about a distinctly feel-bad subject: quadriplegia.”

Those sexy legs? Could they be an intentional cover-up to get people into the comfy theater seats without having a clue about what they’re about to see?

What moviegoers are about to see is a moving story about the relationship between two people who couldn’t be more different – on the outside.

Artistocrat Phillipe was injured in a hang-gliding accident, is depressed over both his new body and the death of his wife, and has a moody teen-age daughter he’s basically given over to his servants to raise.

Attendant Driss has his own set of real-life problems rooted in poverty and lack of opportunity, but has an upbeat personality and a caring heart beneath the exterior cool. Driss is an unlikely hire, but he gets the job because he tells it like it is. When Driss blurts out to Phillipe that his injury is “a bummer” the wealthy aristocrat smiles as if finally, someone gets him.

Better than a Disability Rights Lecture

The film conveys core disability rights concepts with great humor and without being preachy. The distinction between the “medical model” of disability and the civil rights paradigm is highlighted early on.

The other applicants for the attendant job drone on about degrees and hospital experience. Driss only applies as a requirement for receiving jobless benefits. Phillipe can’t stand (hates!) the attendant who wears a white doctor’s jacket, grousing that it makes him feel like a patient.

The film drives home the corrosive effects of pity as well as any disability studies primer. Driss has no pity, and Phillipe loves him for it. The film is not even subtle on this point: “That’s what I want,” Phillipe tells his wealthy friends who worry about the new hire, “no pity.” The audience couldn’t disagree.

The film also tackles society’s failure to recognize people with disabilities as sexual beings. Driss is truly curious to learn how Phillipe can experience sexual pleasure, and takes in the new information as if he’s talking with his buddies on the corner about what turns them on. Paid-for sex and real relationships are handled with humor and a low-key humdrumedness that is more than rare in a film about disability.

And in a million ways large and small, The Intouchables is all about seeing the person, not the wheelchair. When Driss realizes he can drive Phillipe around in the sporty jaguar instead of the clunky accessible van, he just does it, and Phillipe is glad for it.

(Of course in the real world, a wheelchair van is itself freedom, but in the context of a movie about a wealthy aristocrat who liked fast cars before his accident, getting back into one of those cars is not just liberating, it’s fun!)

The New York Times wrote that The Intouchables “can only be described, in the context of French cinema and global popular culture, as an embarrassment.” (What movie were they reviewing?) And the Washington Post, claiming the feel good movie is about something “bad” missed the point entirely.

The Intouchables is here to tell us that quadripalegia is most certainly not a “feel-bad subject.” And if it takes some advertising fakery to get the public to see the movie, so be it. When they get there, they’ll get a dose of something real.

Lainey Feingold is a disability rights lawyer in Berkeley California. You can follow her on Twitter and read about her work at http://lflegal.com.